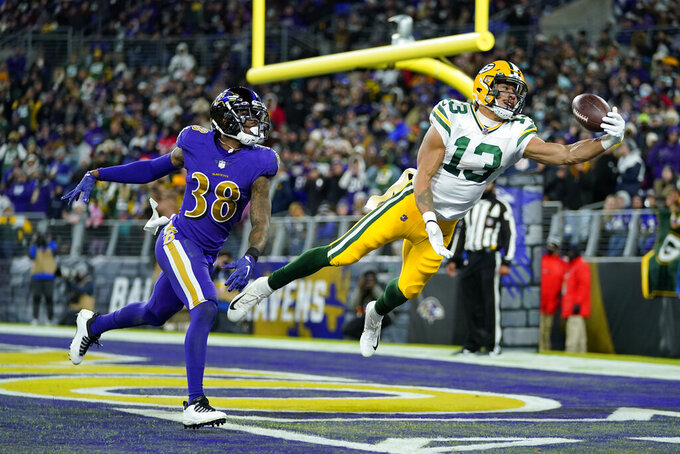 Green Bay Packers wide receiver Allen Lazard (13) reaches but is unable to hold on to a pass attempt in the end zone in front of Baltimore Ravens defensive back Kevon Seymour in the second half of an NFL football game, Sunday, Dec. 19, 2021, in Baltimore. (AP Photo/Julio Cortez)

OPENING LINE: Packers by 7, according to FanDuel Sportsbook.

TURNOVER DIFFERENTIAL: Browns plus-4; Packers plus-12

BROWNS PLAYER TO WATCH: RB Nick Chubb. He has rushed for 1,017 yards to rank fourth in the NFL. Chubb also is averaging 5.4 yards per carry to rank seventh. The Browns may have to lean heavily on Chubb and the running game depending on the status of quarterback Baker Mayfield, who missed the Raiders game while on the reserve/COVID-19 list.

PACKERS PLAYER TO WATCH: QB Aaron Rodgers. The reigning MVP also is the reigning NFC offensive player of the week after going 23 of 31 for 268 yards with three touchdown passes at Baltimore. His next touchdown pass will be his 443rd, enabling him to surpass predecessor Brett Favre for the franchise record. Rodgers has thrown 13 touchdown passes without an interception over his last four games despite dealing with a toe injury that has limited his practice time.

KEY MATCHUP: Browns' running game vs. Packers' run defense. Green Bay had a top-10 run defense for much of the season but has struggled lately. The Packers allowed Baltimore to rush for 143 yards on 26 carries. One week earlier, the Chicago Bears ran for 137 yards on 23 attempts in a 45-30 loss at Green Bay. Cleveland’s best chance of winning this game is to control the clock and keep Rodgers on the sideline.

KEY INJURIES: The Browns got back some of the 22 players who began the week on the COVID-19 reserve list, but C JC Tretter and K Chase McLaughlin tested positive. Mayfield and WR Jarvis Landry were activated and are expected to play despite not practicing. ... DE Jadeveon Clowney will miss his second straight game after a positive test. ... Browns star DE Myles Garrett suffered a groin injury against the Raiders and didn't practice this week. He's questionable but insists he'll play. ... Browns rookie starting CB Greg Newsome will miss his third straight game. He sat out two with a concussion and tested positive this week. ... Browns S John Johnson III (hamstring) is out. ... Browns RB Kareem Hunt (ankle) and CB Troy Hill (knee) aren't expected to play due to injuries, not COVID-19. ... Packers WR Marquez Valdes-Scantling is on the reserve/COVID-19 list. … Green Bay’s offensive line is missing David Bakhtiari, Elgton Jenkins, Josh Myers and Billy Turner due to knee injuries. … Packers CB Jaire Alexander (shoulder) has been practicing but remains on injured reserve. … Green Bay OLB Za’Darius Smith (back) hasn’t played since the season opener. … Packers TE Robert Tonyan (knee) is out for the season, while TE Dominique Dafney (ankle) and WR Equanimeous St. Brown (concussion) didn’t play against Baltimore. … Packers DT Kenny Clark also didn’t play in the Ravens game because he was on the reserve/COVID-19 list, but he could return in time for Saturday’s game.

SERIES NOTES: The Packers have won five of the last six matchups. Cleveland’s only victory during this stretch was a 26-24 triumph at Lambeau Field in 2005. … In their last meeting, Davante Adams caught a 25-yard touchdown pass from Brett Hundley in overtime as the Packers rallied from a two-touchdown, fourth-quarter deficit. Rodgers didn’t play in that game due to a broken collarbone. … The Packers beat the Browns 23-12 in an NFL championship game at Lambeau Field on Jan. 2, 1966.

STATS AND STUFF: The Browns are fighting for their playoff lives. They're in last place in the AFC North, though they're only one game behind division leaders Cincinnati and Baltimore. ... Browns coach Kevin Stefanski cleared COVID-19 protocols and is back with the team after missing the Raiders game. ... This is the first Christmas Day game for the Browns. … Despite missing starters on the offensive line due to COVID-19, the Browns haven’t allowed a sack in either of their last two games. … Browns Pro Bowl LG Joel Bitonio played LT in a regular-season game for the first time in his career on Monday. ... Chubb is the first Browns player to rush for 1,000 yards in three straight seasons since Mike Pruitt from 1979-81. … Garrett comes in with a career-high 15 sacks, also a team record. . ... McLaughlin was placed on the COVID-19 list on Friday. He had missed 6 of his last 12 FG tries. Chris Naggar was activated from the practice squad to replace him. ... The Packers already have clinched their third straight NFC North title. They own a one-game lead over the Arizona Cardinals, Dallas Cowboys and Tampa Bay Buccaneers in the race to earn the NFC’s No. 1 seed and lone first-round playoff bye. … The Packers are 6-0 at Lambeau Field this season and are the only NFL team that hasn’t lost at home. … Packers coach Matt LaFleur owns a 37-9 regular-season record. If he earns his 38th win Saturday, LaFleur would match George Seifert’s record for most victories by a head coach in his first three seasons. Seifert had a 38-10 regular-season record in his first three years … Aaron Jones has six touchdown catches this season, the most by a Packers running back since Johnny Blood McNally had 11 in 1931. … Browns OC Alex Van Pelt worked as a Packers assistant coach from 2014-19. … This is the third time the Packers have played on Christmas. They lost at home to the Bears in 2005 and beat the Bears at home in 2011 in their other Christmas contests. … The Browns are looking to complete a sweep of the NFC North while the Packers attempt to finish off a sweep of the AFC North.

FANTASY TIP: With Randall Cobb injured and Valdes-Scantling on the reserve/COVID-19 list, the Packers need someone to serve as a complementary receiver to Adams. That could lead to a productive outing for Allen Lazard, who has scored in four of Green Bay’s last seven games.