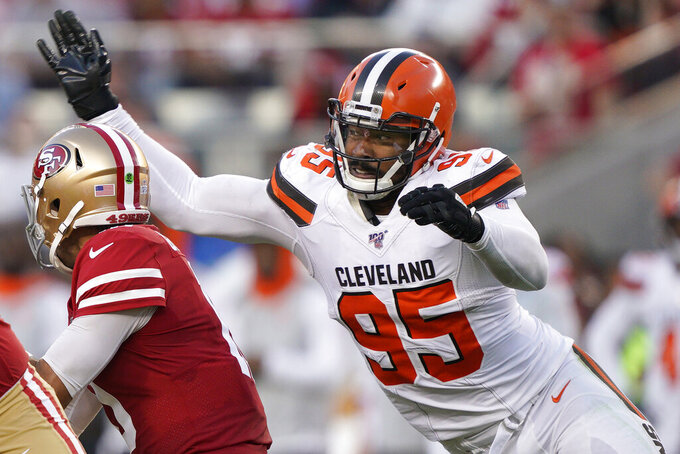 FILE - In this Oct. 7, 2019, file photo, Cleveland Browns defensive end Myles Garrett (95) sacks San Francisco 49ers quarterback Jimmy Garoppolo during the first half of an NFL football game in Santa Clara, Calif. The Browns are closing in on a massive contract extension with Garrett, a person familiar with the negotiations told the Associated Press on Tuesday, July 14, 2020. Garrett, the No. 1 overall pick in 2017 and one of the NFL's premiere edge rushers, and the team could have the deal completed in the next day or so, said the person who spoke on condition of anonymity because of the sensitivity of the talks. (AP Photo/Tony Avelar, File)

The timing of Garrett's extension is surprising since the last time he played in a game it ended with him ripping off Pittsburgh quarterback Mason Rudolph's helmet and striking him in the head with it. The shocking attack led to a six-game suspension for Garrett and questions about his character.

But despite a league ban that effectively ended Cleveland's playoff hopes, the Browns have never wavered in their belief in Garrett as a person or player. They wanted to make certain they'll have the 24-year-old for multiple years, and he will now anchor their defense through the 2026 season.

“It would be remiss of me not to address the fact that we are choosing to do this after a season during which Myles was suspended,” said Browns first-year general manager Andrew Berry.

“Myles has been accountable for his mistake and we view the incident as well out of character. We don’t believe one moment should define him based on how he has handled himself prior to and in the months after last year’s incident.

"We are excited to ensure that Myles will stay in Cleveland for the foreseeable future.”

Garrett posted a video on Instagram of him signing the deal and then writing a note he pushed in front of the camera that said: “Cleveland keep betting on me. World keep betting against us.”

Garrett's agent, Bus Cook, and the Browns had been working on the record-setting package for months, and they finalized it amid uncertainty about the opening of training camp later this month and whether there will be a 2020 season because of the COVID-19 pandemic.

Garrett was under contract through 2021 after the Browns exercised the fifth-year option on his rookie deal in April. He’ll make $4.6 million in 2020 and $15.18 million next season before the extension kicks in.

The No. 1 overall draft pick in 2017, Garrett is one of the league's most feared defenders, a combination of power and speed. His average salary eclipses the $23.5 million per season the Chicago Bears are giving star edge rusher Khalil Mack, who signed in 2018.

Garrett has freakish physical skills. At 6-foot-4, 280 pounds, he's a devastating mix of power and speed, and his ability to turn the corner and get to the quarterback or harass him has forced teams to sometimes devote two and three blockers to try and slow Garrett down.

“It’s really important for us as an organization to cement Myles’ status here for a really long time,” said coach Kevin Stefanski.

"Myles’ skill set is still scratching the surface. He’s young, and I can’t wait to get our hands on him and put him in this scheme and let him loose. He’s as disruptive as they come. He’s big, long, fast, quick and has a motor. He checks all the boxes.”

Garrett has 30 1/2 sacks in 37 games since the Browns selected Garrett from Texas A&M three years ago. Garrett had 10 sacks in 10 games last season before the infamous incident with Rudolph, who tangled with the defensive end in the closing seconds of Cleveland's 21-7 win over the rival Steelers on Nov. 14.

Garrett claimed he attacked Rudolph because the QB uttered a racial slur toward him. Rudolph has denied saying anything derogatory to antagonize Garrett. He was reinstated in February after a hearing with arbitrators and meeting in New York with Commissioner Roger Goodell.

His suspension behind him, Garrett wants to reward the Browns for their loyalty.

“In 2017, the Cleveland Browns bet on me,” he said. “This city quickly became my home and these people quickly became my family. I’m eternally grateful for this opportunity, the support of my friends and family, the organization, my teammates, the fans. I could go on forever, but even that wouldn’t be enough time to express my gratitude.

"I’ll just say this: Keep betting on me, Cleveland, because I won’t let you down. Now, let’s get to work.”

Garrett's extension was completed a week after the Browns restructured end Olivier Vernon’s contract. Vernon was due to make $15.25 million in 2020 before agreeing to a deal for $11 million guaranteed.