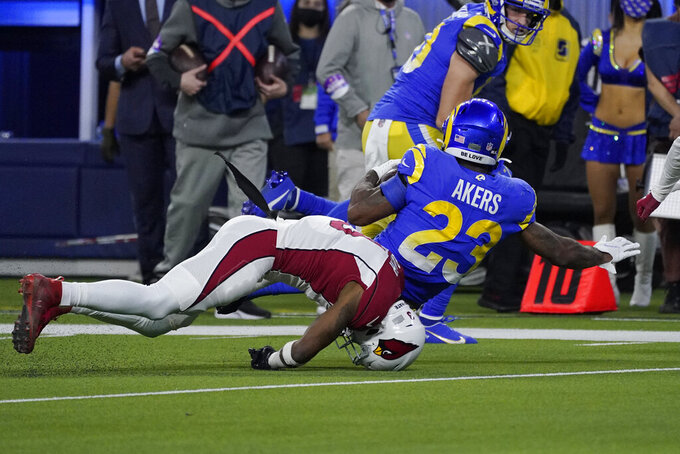 INGLEWOOD, Calif. (AP) — Arizona Cardinals safety Budda Baker is being evaluated for a concussion after he appeared to briefly lose consciousness in a helmet-to-helmet collision Monday night late in the third quarter of a playoff game against the Los Angeles Rams.

Cardinals spokesman Mark Dalton said Baker was taken to a hospital for further evaluation. The medical staff said Baker was alert and that he never lost feeling or movement in his extremities.

Baker was taken off on a stretcher following the play. Rams running back Cam Akers lowered his shoulder as Baker went in for the tackle, but Baker still made contact with Akers' helmet. Baker immediately went down and teammates signaled for medical attention.

Trainers and medical personnel put head and neck stabilizers around Baker's helmet and placed him on a backboard. The 26-year-old Baker raised his right arm while being wheeled off the field as concerned players from both teams watched.

Baker is in his fifth NFL season. He was a second-team selection to the AP All-Pro team.