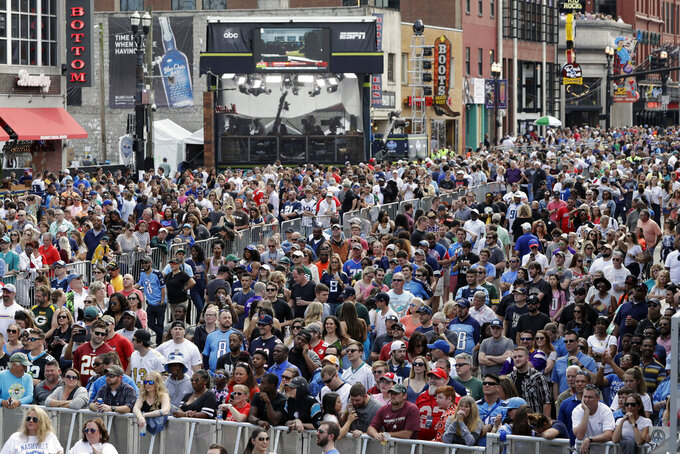 FILE - In this April 27, 2019, file photo, fans attend the final day of the NFL football draft in Nashville, Tenn. In a memo sent to the 32 teams Monday and obtained by The Associated Press, NFL Commissioner Roger Goodell outlined procedures for the April 23-25 draft. The guidelines include no group gatherings. (AP Photo/Mark Humphrey, File) 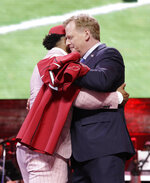 It was supposed to be an extravaganza only Las Vegas can bring, complete with showgirls, A-list celebs, and a stage in the middle of the Bellagio fountains.

Instead, the NFL draft will come to you Thursday night from the friendly confines of Roger Goodell’s basement.

No one, of course, expected anything like this to happen. But here’s a timeline of what might take place as America tunes in for a draft like no other (all times EDT):

7:45 p.m. — Goodell leans his iPhone against a souvenir football on the folding table he found in his basement closet. Nervously, he checks the WiFi connection and tries to remember if his right side is his best side.

8 p.m. — The broadcast opens with Goodell sitting alone in his basement, welcoming fans to the draft. He pulls an old stopwatch from his coat pocket and declares the draft open before answering the one question viewers really want to know. ``Yes, I am wearing pants,’’ he tells the country.

8:10 p.m. — The Bengals, after a brief interruption when Goodell’s dog walks into the picture, announce they will take LSU’s Joe Burrow with the first pick. Goodell marks Burrow off his yellow legal pad, then scratches his dog’s belly and tells him he’s a good boy.

8:15 p.m. — ESPN throws it to Burrow’s parents’ house, where he’s sitting in his old room, a poster of his childhood idol Tom Brady on the wall behind him. Burrow is so excited he runs into the living room to high-five his mother. “Back off 6 feet, draft boy,’’ she warns him.

8:25 p.m. — A roar is heard, startling Goodell. Realizing what it is, he quickly jumps up to turn off “Tiger King” on his basement TV.

8:26 p.m. — The country discovers Goodell wasn’t telling the truth about his pants.

8:35 p.m. — The Bucs are letting Tom Brady run their draft as well as their team, and he picks the first of what will be five offensive linemen. After an awkward pause, Brady invites Buc fans to join him in chanting "Tompa Bay, Tompa Bay’’ and reminds them they can buy the T-shirts online.

8:48 p.m. — There’s a break for commercials and then a PSA from Dr. Anthony Fauci, who demonstrates the proper way for draft picks to wash their hands. He does it while singing “Wash hands, wash hands, till Brady comes home.’”

8:49 p.m. — Goodell uses the break to answer front door, where there’s a delivery from Pizza Hut, the NFL’s official pizza supplier. Goodell wipes down the pizza box with disinfectant, then apologizes to the delivery person for not having any cash for a tip.

9 p.m. — With just 10 minutes a pick, things are moving so fast that Goodell barely has time to wolf down a slice of pepperoni. He calls for the Bengals' pick, only to find out the team’s GM can’t get online because his daughter is using up all the bandwidth streaming “Tiger King” on her iPad.

9:15 p.m.—— Goodell invites fans to send messages he can read on air. The first one comes from an M. Jordan, who wonders why ESPN is not airing part 8 of “The Last Dance.’”

9:20 p.m. — The Chargers select Alabama quarterback Tua Tagovailoa, the second quarterback picked. Goodell mutters "Yes!’’ under his breath, then checks his pocket to make sure he still has the Vegas betting slip that pays him if Tagovailoa is picked before Oregon’s Justin Herbert.

9:25 p.m. — The Raiders are up and all eyes turn to the new team from Las Vegas. Mark Davis excuses his appearance, saying he hasn’t been able to get to his barber lately, then selects a wide receiver from Rensselaer Polytechnic Institute who isn’t on anyone’s draft chart. After promising fans that he’s the new Fred Biletnikoff, Davis then picks up his kazoo and starts playing “Viva Las Vegas.”

9:28 p.m. — Goodell rips up his betting ticket on the Raiders winning more than 6 games next season.

9:40 p.m. — The first dispute of the draft come as the Vikings try to make a sleeper pick at quarterback, only to find out all their information has mysteriously been wiped off their laptop screens. After pleading unsuccessfully with Goodell for more time, they switch to an alternate pick.

9:50 p.m. — Picking next, the Patriots take the quarterback the Vikings wanted. Bill Belichick is seen laughing loudly from his basement while fiddling with some computer equipment.

Saturday, 4:15 p.m. — It’s been a draft like no other, and the NFL thought of everything, including the canned boos piped in every time Goodell sat before his mic.

Finally, after long hours in basements and kitchen tables across the country, the last pick is made.

Somehow Mr. Irrelevant seems even more irrelevant than ever.

___ Tim Dahlberg is a national sports columnist for The Associated Press. Write to him at tdahlberg@ap.org or http://twitter.com/timdahlberg