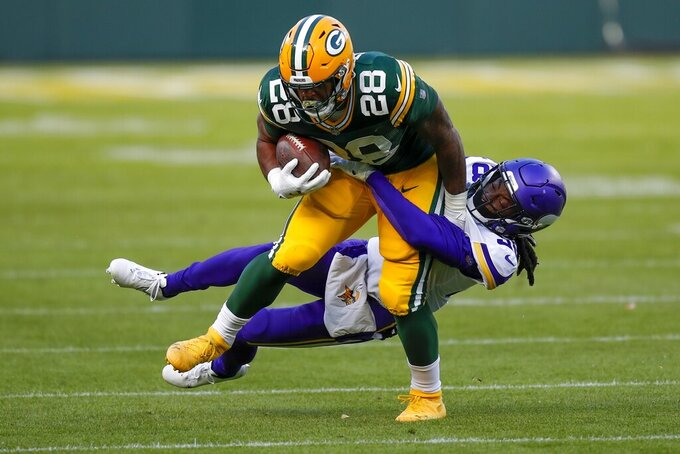 This wasn't a friendly hello.

Zimmer expected the first-round draft pick to cover the outside, where Adams had sprinted after cutting right in front of the goal line and making an easy catch in the corner of the end zone. Gladney was shaded too far inside, unable to recover in time. That made him no match for Adams, especially when the ball was being thrown by Aaron Rodgers.

The on-field lessons are continuing for the cornerbacks in Minnesota, where Zimmer and the Vikings are leaning hard on an inexperienced group in a rebuilt defense.

“They’ve all made improvements, each one of them in different areas,” Zimmer said Wednesday. “I know Gladney had some bad plays this week, but he had some good plays, as well. Those are the kinds of things you’re looking for."

Learning on the fly has become a necessity.

“What I’m looking for out of these guys is not so much paint-by-the-numbers. It’s a little bit more, ‘Oh, I can kind of anticipate what they might be doing here based off the split or the motion or the receiver that’s in there,'” Zimmer said. “Right now, we’re still in kindergarten, but we’re trying to get to a Master’s program here quickly.”

By the time rookie defensive end D.J. Wonnum strip-sacked Rodgers to finish off the Vikings’ 28-22 win over the Packers, Minnesota had only two healthy cornerbacks left in the game: Gladney and fellow rookie Harrison Hand, a fifth-round draft pick.

Rookie starter Cameron Dantzler, a third-rounder, was taken off on a backboard after taking a hit to the head in the first quarter. Backup Mark Fields II left in the third quarter with a chest injury — his father told the St. Paul Pioneer Press he suffered a punctured lung — and backup Kris Boyd hurt his leg in the fourth.

The situation became so dire against Rodgers and the Packers that Zimmer was forced to move safety Anthony Harris to slot cornerback with rookie Josh Metellus taking Harris’ spot.

“I’m sure that won’t be the end of playing a little bit of musical chairs now and then,” safety Harrison Smith said Wednesday.

Cornerback Mike Hughes had been placed on injured reserve two days earlier with a neck injury. Holton Hill was inactive with a foot injury and hasn’t played since Week 4. Chris Jones, added off waivers from Detroit earlier in the week, was inactive.

Rodgers was 27-of-41 passing for 291 yards, three touchdowns and no interceptions in windy conditions. The Vikings have allowed 287.3 passing yards per game this season, the third-highest total in the NFL. Their three interceptions are tied for 26th in the league.

Smith said he understands the pressure on the young cornerbacks.

“That’s a lonely place out there, whether you’re a vet or not,” Smith said.

Dantzler, whose head snapped back in a collision with Harris' leg while they tried to make a tackle, suffered a neck injury and was evaluated for a concussion. Zimmer said Dantzler was doing better and had a chance to play on Sunday against Detroit. He missed Weeks 2 and 3 with a rib injury.

Dantzler did not practice on Wednesday. Neither did Fields or Hill. Boyd did not appear on the injury report, but Hand was a limited participant with a hamstring injury.

Minnesota was already trying to replace its top three cornerbacks from last season. Xavier Rhodes was released for salary-cap savings and signed with Indianapolis. Trae Waynes and Mackensie Alexander signed with Cincinnati as free agents.

The Vikings drafted Gladney, Dantzler and Hand to go with Hughes and Hill, both third-year players. Boyd and Fields are in their second seasons.

“You know we’ve got so many young guys, and so many young guys that we’re trying to get ready for prime time, I guess is the best way to say it,” said Zimmer, who had a total of seven rookies play on defense against the Packers. “And you know it just takes more time than we’d like.”

Gladney’s approach to Adams’ first touchdown was a prime example. Gladney had help inside from Harris, so the focus should have been covering Adams to the outside. Adams scored a similar touchdown later in the game where Gladney and Boyd let him get open outside.

“There’s a lot of little things like that I’m trying so hard to get these young kids to understand not only about their position, but the guy they’re playing against, where their help is, you know. It just makes it tough,” Zimmer said.