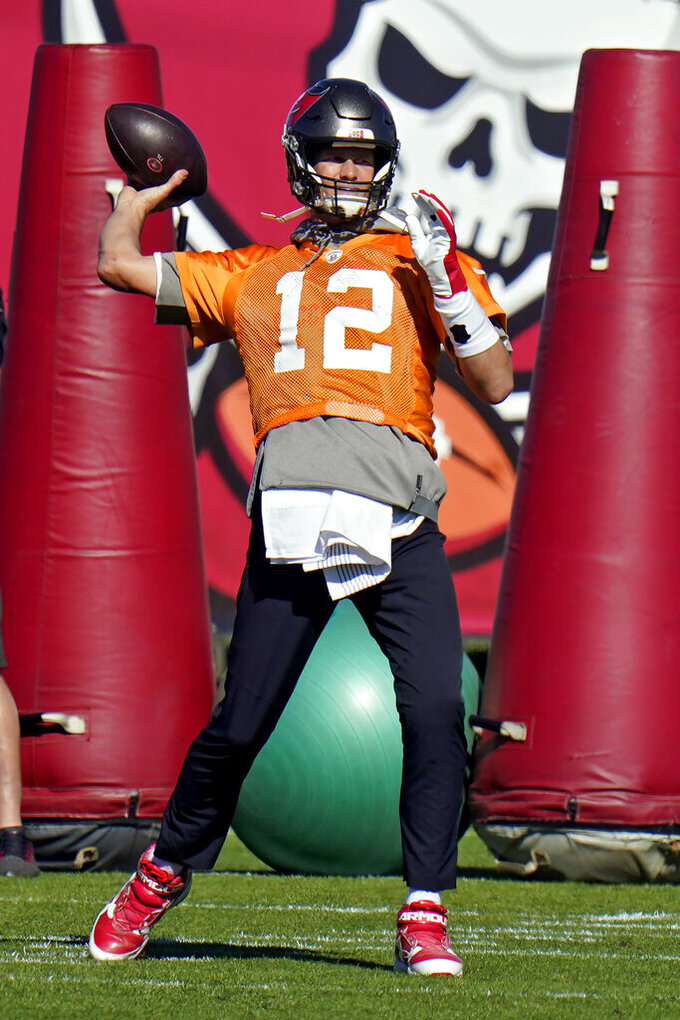 Ron Rivera loves a good catch phrase and is fond of using visual presentations to convey messages to his players.

“I’m waiting for the PowerPoint to show up on the screen, where he talks about what we were able to do in 2014,” said Davis, a member of Rivera’s Panthers a half-dozen years ago and now reunited with the coach in Washington. “He’s going to mention it at some point.”

Entering its game against Tom Brady and the visiting Tampa Bay Buccaneers on Saturday night, NFC East champion Washington's 7-9 record made it just the third sub-.500 club to win its division.

The other two — Seattle, 7-9 after the 2010 regular season, and Carolina, 7-8-1 four years later — were victorious in the wild-card round, proving that losers can win in the NFL playoffs.

“All you need is hope. If you went on what everybody said, then why play the game? ... How many times have the experts been wrong? How many times have there been a major upset?” said Rivera, whose Panthers held the Arizona Cardinals to 77 yards in a 27-16 win over a team coached by Bruce Arians, who now runs Tampa Bay. “I say it goes all the way back to way back when, when this little guy named David upset Goliath.”

Rivera's mantra for the week?

He used the expression “Why not us?” four times during Wednesday's video session with reporters.

“A lot’s been made of the NFC East and, ‘Oh, the winner’s not even going to be .500.’ Or, ‘Oh, they’re 7-9.’ A lot of people counting us out, saying we don’t even really belong in the playoffs. But we’re here. The fact of the matter is, we are here,” linebacker Ryan Kerrigan said. “We’ve got a playoff game this weekend, so why can’t we go win this playoff game? Why can’t we go win another one after that?”

Arians, whose Bucs went 11-5, turned to some coach speak of his own, insisting about Washington, “We don’t see them as a 7-9 team,” because of a 5-1 record in quarterback Alex Smith’s starts.

On the other hand, Washington won only one game all season against an opponent that finished with more than six wins.

Matt Hasselbeck, the Seahawks quarterback when they stunned the reigning Super Bowl champion New Orleans Saints 41-36 a decade ago, and Pete Carroll, Seattle’s first-year coach at the time, recalled hearing exactly the sort of chatter to which Kerrigan referred.

“There were disparaging comments and people appalled at the thought that a team with a losing record would be in the playoffs,” Carroll said, “which I thought was hilarious at the time.”

The words that wound up mattering more, Hasselbeck said, came in the speech Carroll delivered at Seattle’s initial team meeting of the week.

That set the tone for what forever will be remembered for Marshawn Lynch’s tackle-busting “Beast Quake” performance.

“We were a punchline: ‘You shouldn’t be in. You don’t deserve to be in. The Saints — world champs; Drew Brees; Sean Payton — shouldn’t have to fly all the way out to Seattle to beat you. They should be allowed to beat you at home,'" said Hasselbeck, now at ESPN.

That rah-rah stuff might help — “Confidence is very important with any game you’re playing, and I think our team as a whole has a lot of confidence going into this game,” Washington center Chase Roullier said — but so does talent, of course, and X’s and O’s.

Knowing they were “supposed” to lose, Seattle’s coaches mixed things up.

Switches in strategy. New plays and formations to “kind of use (the Saints’) film study against them, if you will,” Hasselbeck said.

“We tried things we didn’t know if they were going to work. But if they didn’t work, so what? No one gave us a chance to win, anyway,” Hasselbeck said. “And if they did work, we might just be able to pull off one of the greatest upsets in NFL history.”

Washington’s offensive coordinator, Scott Turner, has demonstrated a penchant for trick plays throughout this season.

So maybe there will be some of that against the Bucs.

One element that aided Carroll’s Seahawks and Rivera’s Panthers will not be a factor this time: a home crowd.

Spectators are banned Saturday because of the coronavirus pandemic; visiting NFL teams went 128-127-1 this season.

So Brady’s teammates won’t have a hard time hearing audibles. He might be able to use a hard count to draw Washington’s strong defensive front offsides.

No matter what, though, Rivera won't be deterred from imagining an ideal outcome.