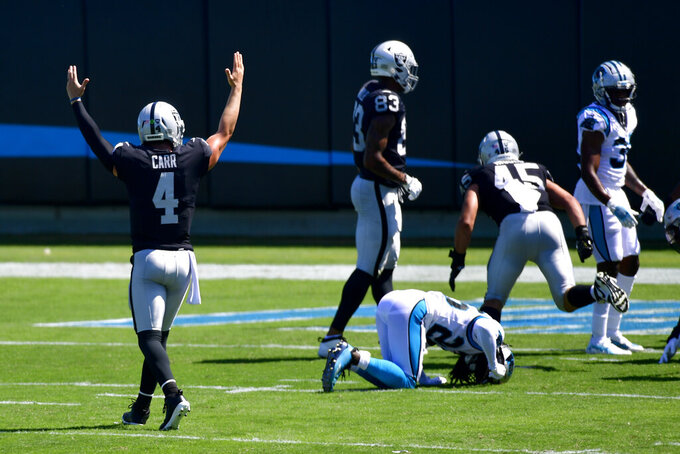 Las Vegas Raiders quarterback Derek Carr celebrates after a touchdown by Josh Jacobs during the first half of an NFL football game against the Carolina Panthers Sunday, Sept. 13, 2020, in Charlotte, N.C. (AP Photo/Mike McCarn)

When the Las Vegas Raiders used their first draft pick on speedy receiver Henry Ruggs III, the hope was it would open up an offense that struggled to deliver big plays the past few seasons.

The early returns are promising.

An early deep shot from Derek Carr to Ruggs got the Raiders offense moving in the season opener at Carolina and helped open up the offense the rest of the way. That led to a balanced attack that gave the Raiders their highest-scoring game in nearly two years with a 34-30 victory.

“Just the threat of that speed makes people play, instead of 8 yards deep, they play nine yards deep. They want to get out of their pedal faster and it opens some things up,” Carr said Wednesday. “Obviously you see what it did for our run game. ‘OK, you guys want to do certain things. Well, we got some guys that can make these kinds of plays.’ You saw it in the second half.”

Carr got started early in the opener when he tried to hit Ruggs on a deep strike on the second play from scrimmage. Even though it didn’t work, it still helped down the road.

Carr and Ruggs connected for the first time on the next drive on a long pass that went for 45 yards, setting up a 1-yard TD run for Josh Jacobs.

The Raiders got Ruggs the ball five times in all in the first half with his three catches going for 55 yards and two runs for 11 yards.

“He can stretch the field horizontally on the jet sweeps. He’s a threat to carry it, and he’s also obviously very fast vertically,” coach Jon Gruden said. “He made his presence felt. We tried to get it to him early and often, and we’ll continue to do that.”

That should only help spark the Raiders offense. Carr has been one of the least aggressive quarterbacks in the NFL since Gruden arrived in 2018, with the second-lowest average depth of throw in the league in that span.

But Carr has been capable of throwing deep even if he hasn’t always been willing or had the proper targets to take advantage of it.

That’s why the addition of Ruggs was so important. Over Carr’s career, the Raiders are 10-3 when he completes at least three deep throws in a game, compared to just 18-37 when he has one or fewer.

Carr also connected on a 23-yard deep throw for a touchdown to Nelson Agholor and said he then noticed the Panthers giving the receivers more cushion in the second half, which helped the underneath throws and running game.

“It’s all about yardage,” Carr said. “We’re not about where the ball is put, we’re about the yards it gains. That’s just the offense. That’s how we play and I believe in it. If we throw accurately, little plays like that after you show them those deep shots, the run game should be there and accurate balls underneath, that’s what this offense has built on for years. And a lot of great players have made a living doing that.”

The offense was helped by a strong game from the offensive line despite starting right tackle Trent Brown leaving after one series with a calf injury and backup Sam Young leaving later in the first half with a groin injury.

Backup guard Denzelle Good moved to tackle and the Raiders allowed pressure on only 10% of dropbacks for the game, the best rate in the league in Week 1, according to Pro Football Focus.

Carr knows repeating that won’t be as easy this week against a much tougher New Orleans defense that features pass rusher Cameron Jordan. The Saints had three sacks in Week 1.

“You got to put yourself in the Saints’ shoes. They turn the film on, what are their coaches saying? ‘This guy wasn’t touched all week. They went up and down the field. We have to hit them. We have to do all these things,’” Carr said. “All right, challenge accepted. We know what they’re saying in their building. That’s common sense, that’s football. You hit the other quarterback, you have a better chance to win the game. The challenge is there for us and the challenge is there for myself to know that sometime that pocket throughout NFL season isn’t always perfect, but we still have to be able to make plays.”