Defense fuels Vikings victory this time, to enter bye at 5-1 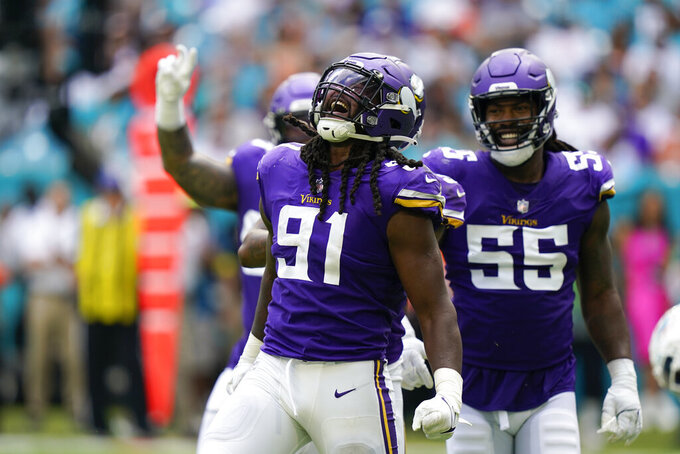 MINNEAPOLIS (AP) — Minnesota Vikings coach Kevin O'Connell sat for a minute in his office space in the visitor's locker room after his team's sweat-it-out victory in Miami, reflecting on which performances by the defense he wanted to highlight in his postgame address to the players.

“You know what?” O'Connell thought to himself after the Vikings beat the Dolphins 24-16 to improve to 5-1 in his first season on the job. “Everybody gets a game ball.”

The prizes this time weren't actually awarded, the gesture merely symbolic, but after the offense — and special teams — largely drove the three previous victories this game provided a glimpse of how this defense can deliver when needed, too.

The Vikings allowed 385 net yards passing — the fourth-most in the NFL this year and the most against them in 47 games since a win at Dallas (393) on Nov. 10, 2019 — in a total inflated a bit by Miami being in catchup mode late. The most telling data was the season-high six sacks, three turnovers forced and only three points allowed over the first 49:56 of the game.

This came on an 86-degree afternoon in a stadium where the visitor's sideline always runs hotter on a Sunday when the offense punted a whopping 10 times to continually send the defense out on the field for more. The Dolphins ran 73 plays, netting 458 yards.

“You guys were our backbone,” O'Connell said to them.

The Vikings currently rank eighth in the league in sacks per pass attempt (8.2%), but they only tackled the quarterback behind the line of scrimmage a combined four times over the previous three games. Za'Darius Smith had two sacks, as did backup outside linebacker Patrick Jones II for the first two of his career in an elevated role with D.J. Wonnum sidelined by an illness.

“We harped on this all week of getting pressure on the quarterback," Smith said. "We’ve been lacking a little bit on that, but today we brought that pressure.”

Despite all the room Tyreek Hill and Jaylen Waddle found to run after the catch, the secondary was plenty sharp, too.

Harrison Smith hung onto an interception at the Miami 41 with 18 seconds left before halftime to set up a field goal and forced a fumble at the Minnesota 26 that fellow safety Camryn Bynum recovered with the Vikings leading by six points with about four minutes left.

Peterson had an interception and three pass breakups.

“He was all over the place and really kind of set the tone defending two premier wideouts,” O'Connell said Monday. “All day long, he was one step ahead making some critical plays.”

The Vikings lead the NFL with an average starting field position differential of 7.5 yards better than their opponent, as sure of a sign of stellar kick coverage and return units as there is. The next-closest team is Philadelphia (5.2).

The pass protection for Kirk Cousins must be better. He was sacked three times by the Dolphins and nearly took a safety on a third-down throw he just barely unloaded for an incompletion under pressure by Trey Flowers at the end of the second possession.

Tomlinson doesn't accumulate any eye-popping statistics from his 3-4 defensive end spot, but his interior rush helped set up Smith, Jones and Danielle Hunter for their pressure from the edges.

“I know our opponents probably feel it, but I hope around the league he starts getting some accolades just for the impact he has on games both on the run and pass,” O'Connell said.

Kicker Greg Joseph missed an extra point that could've been costly, leaving the lead at 16-3 early in the fourth quarter. He has missed four field goals, all from 50-plus yards, and two extra points over the last four games.

The Vikings entered their bye week remarkably injury-free. Wonnum was the only player not healthy enough to play in Miami. The only significant season-ending injury has been to rookie safety Lewis Cine, who was only playing on special teams.

26.5% — Percentage of three-and-out possessions by the Vikings, the fifth-highest in the league. They're 14th in scoring with an average of 23.2 points per game, but they've punted 27 times to tie for the sixth-most in the NFL.

The week off will give O'Connell and his staff more time to work on ways to try to keep the offense from stalling so frequently, ideally with more long completions for Cousins. The Vikings host Arizona on Oct. 30.