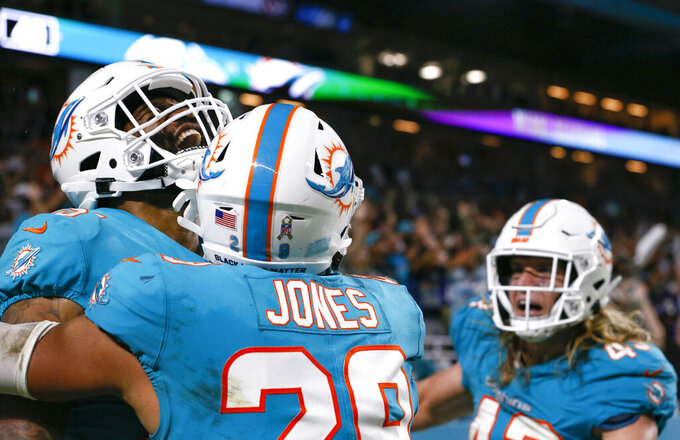 BETTING LINE: Dolphins by 3 1/2, according to FanDuel SportsBook.

TURNOVER DIFFERENTIAL: Dolphins minus-3; Jets minus-15.

DOLPHINS PLAYER TO WATCH: WR Jaylen Waddle. With 60 catches, he’s well ahead of all other rookies in that department, and the Miami rookie mark of 84 set by Jarvis Landry in 2014 is well within his reach.

JETS PLAYER TO WATCH: WR Elijah Moore. The second-round pick out of Mississippi is beginning to break out after a slow start. He has 16 catches for 195 yards and three touchdowns in his last three games.

KEY MATCHUP: New York offensive line vs. Miami front seven. Miami made things miserable for Lamar Jackson and the Ravens in their last game by dialing up lots of Cover Zero with blitzes and a heavy pass rush. That's one reason New York chose to start veteran Joe Flacco over the inexperienced Mike White this week, hoping he'll be able to take advantage of the weakness in the secondary if/when the Dolphins run that scheme.

KEY INJURIES: Dolphins WR Will Fuller remains on IR with a finger injury and was unlikely to return this week. ... Jets QB Zach Wilson continues to heal from a sprained knee ligament that will sideline him a fourth straight game. ... Rookie starting CB Brandin Echols was placed on IR with a quadriceps injury.

SERIES NOTES: The AFC East rivals have played 111 times, including a postseason game won by Miami, and the series is tied 55-55-1. ... The Dolphins have won six of the last seven meetings and could reclaim the series lead for the first time in just over 21 years. The Jets evened it at 35-35-1 with a 20-3 win on Nov. 19, 2000, and have not trailed in the head-to-head standings since. ... Average score of the first 111 games of the series: Dolphins 22, Jets 21. ... The only time they faced each other in the playoffs was Jan. 23, 1983, when Miami won 14-0 in the AFC championship game before losing to Washington in the Super Bowl. On a muddy field at the Orange Bowl, A.J. Duhe intercepted Richard Todd three times and returned one for a score. Todd finished with five INTs. ... In 1986, the Jets won 51-45 in overtime on Ken O'Brien's 43-yard TD pass to Wesley Walker. O'Brien threw for 479 yards and three TDs with one INT, while Miami's Dan Marino had 448 yards, six TDs and two INTs. ... In 1994, Marino led the Dolphins to 22 unanswered points capped by his fake spike with 22 seconds left when he threw a 5-yard TD pass to Mark Ingram for the winning score in a 28-24 victory. ... The Jets had a big comeback of their own in 2000 with the “Monday Night Miracle.” New York erased a 30-7 fourth-quarter deficit as Vinny Testaverde threw four TD passes in the period, including a catch by offensive lineman Jumbo Elliott for the tying score. John Hall's 40-yard field goal in OT gave the Jets an unlikely 40-37 victory.

STATS AND STUFF: The Dolphins are looking for their first three-game winning streak since winning five in row in the middle of last season. ... After this week, Miami won’t be on the road again until after Christmas. The Dolphins’ next three games are at home, and they have a bye week thrown in there as well. Miami’s next road game after Sunday is Dec. 27 at New Orleans. ... The Dolphins are 7-6 at MetLife Stadium, going 7-4 there against the Jets and 0-2 against the Giants. ... QB Tua Tagovailoa will start after not doing so in the win over the Ravens because of a finger injury. He came in to replace the injured Jacoby Brissett and threw for 158 yards and ran for a late touchdown. ... In his last three starts, from Week 6-8, Tagovailoa's 86 completions were the most in the NFL. ... Dolphins CB Xavien Howard, the reigning AFC defensive player of the week, has more interceptions over the last five seasons (24) than anyone in the NFL. He forced a fumble and returned it 49 yards for a touchdown against Baltimore. ... K Jason Sanders has made 63 consecutive extra points, the longest active streak in the NFL. ... The Jets are starting 36-year-old Flacco in place of the injured Wilson after White started the last three games. If Flacco can throw for 250 or more yards, the Jets will be the second team in NFL history to have four players do that in a game in a single season. Wilson, White and Josh Johnson have all done it. The Ravens did it in 2015 with Flacco, Matt Schaub, Ryan Mallett and Jimmy Clausen. ... The Jets are the first team to give up at least 45 points three times in a four-game span since the Giants in 1966. ... After allowing 489 yards against Buffalo, teams have rolled up 1,890 yards in the past four games — the most given up by New York in a four-game span in team history. ... The 175 points allowed by the Jets in their past four games mark the second-highest total by any team since the 1970 merger. Only Tennessee in 2004 was worse with 177 points given up.

FANTASY TIP: Dolphins RB Myles Gaskin has been frustratingly inconsistent for fantasy managers who have plugged him in every week. This might be the week to keep him in your lineup. The Jets' run defense has been awful and Gaskin might find room to make plays out of the backfield.