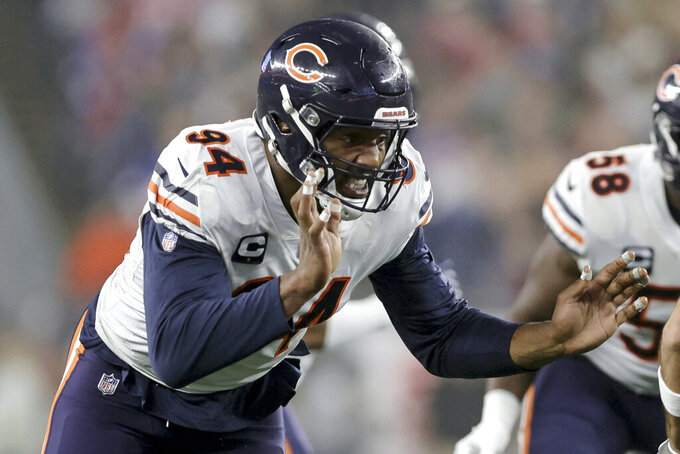 FILE - Chicago Bears defensive end Robert Quinn (94) rushes during the first half of an NFL football game against the New England Patriots, Monday, Oct. 24, 2022, in Foxborough, Mass. The undefeated Philadelphia Eagles acquired three-time Pro Bowl defensive end Robert Quinn from the Bears on Wednesday, Oct. 26, 2022, a person familiar with the situation said. The person spoke on the condition of anonymity because the teams haven’t officially announced the move. Chicago gets a fourth-round pick in return. The NFL Network and ESPN first reported the trade. (AP Photo/Stew Milne, File)

LAKE FOREST, Ill. (AP) — The undefeated Philadelphia Eagles already have one of the NFL's best defenses.

Now, they're adding another pass rusher to the mix.

The Eagles acquired three-time Pro Bowl defensive end Robert Quinn from the Chicago Bears for a 2023 fourth-round pick on Wednesday.

The teams said the trade was pending a physical.

Quinn goes from a rebuilding franchise to a Super Bowl contender. The Eagles (6-0) are the lone undefeated team. Philadelphia, coming off a bye, hosts Pittsburgh on Sunday.

The 32-year-old Quinn is off to a slow start with just one sack and three quarterback hits after opting not participate in offseason workouts. But he broke Hall of Famer Richard Dent's franchise record with 18 1/2 sacks last year in a resurgent season.

“I value — I think I’ve talked about that a lot — the locker room and what it means and the culture and it (stinks) to mess with that, to be completely honest with you,” Bears general manager Ryan Poles said.

“But again, my job is to do what’s best for this organization not only now, but in the future. I felt like that was the best move for us to make.”

With Quinn, an Eagles defensive line that already has Haason Reddick, Josh Sweat, Javon Hargrave, Fletcher Cox, Brandon Graham and Jordan Davis becomes that much more daunting. He replaces defensive end Derek Barnett, who tore an ACL in the opener at Detroit.

The Eagles are holding opponents to 297.8 yards per game, which is fourth in the NFL. They're fifth against the pass at 188 yards and rank second in interceptions with nine. When it comes to sacks, they're tied for 10th with 17. And that's an area where Quinn could help.

Quinn bounced back in a huge way last year and seemed a likely candidate to be traded in the offseason considering the Bears were essentially starting over. They hired Poles and coach Matt Eberflus to replace the fired Ryan Pace and Matt Nagy after missing the playoffs for the ninth time in 11 years.

But Poles said trading Quinn in the offseason was not his intention.

“I know I wanted Robert on this team in the beginning," he said. "There weren’t many conversations at all. I was transparent with them — him and his crewー about that. I knew the way he played this game, the motor and all that.”

He said the Bears “needed that” to “kickstart” how the defense would perform under Eberflus and new coordinator Alan Williams.

Quinn, meanwhile, had said several times he would rather remain with the Bears than be traded. Poles said he wasn't sure how his play this season impacted his market value.

When the deal materialized, it caught star linebacker Roquan Smith off guard. He was at the dais addressing reporters when the news surfaced and he became emotional.

He was asked how so.

“Let me take a second for a second, if you don’t mind,” Smith responded. After about 10 seconds, he continued: “You know, I have a great deal of respect for that guy, you know. Damn. Crazy.”

Smith got up and walked away, ending a brief session. A team spokesman told reporters, “We’ll get you tomorrow.”

The Bears (3-4) visit the Dallas Cowboys (5-2) on Sunday. Chicago is coming off a surprising win at New England on Monday night.

Though they've struggled against the run, the Bears have been one of the best at defending the pass. But now, they're without one of their most important players.