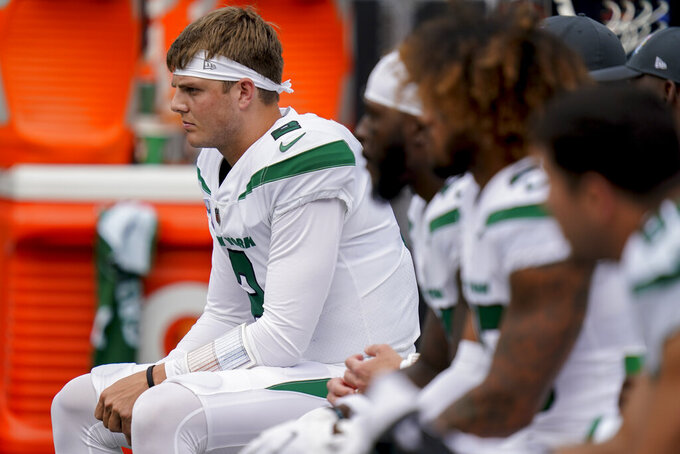 New York Jets quarterback Zach Wilson sits on the bench during the first half of an NFL football game against the Tennessee Titans, Sunday, Oct. 3, 2021, in East Rutherford. (AP Photo/Seth Wenig)

Atlanta Falcons coach Arthur Smith said a practice-week option before Sunday’s game against the New York Jets in London was to spend the whole week overseas, and “treat it like a bowl week.”

The Falcons and Jets, each 1-3, declined the bowl-week approach.

This visit to London will be all about the game, as each team chose to stay home for practices through Thursday before making the long flights and preparing for the 9:30 a.m. EDT kickoff at Tottenham Hotspur Stadium.

“In the past, some people have ... gone over maybe Sunday night from the previous game or Monday, and they’ve been there all week,” Smith said. He said “pretty good science” supports the alternate plan to fly through the night after Thursday's practice and arrive on Friday.

“At the end of the day, both teams are handed the same circumstances,” Smith said. "We've got to adapt. We’re excited about going over there. I think it’s a hell of an opportunity when you can showcase the NFL and the game in a market like this. I’m excited as hell, the team’s excited.”

Jets coach Robert Saleh said he experienced both travel plans when he was the linebackers coach with Jacksonville. He said leaving on Monday for a full week away “was a miserable week, for a coach anyway. And we lost.

“And then the very next year, we did Thursday and that, for me at least, and just talking to players, that was the best they felt on a Sunday. And then we won and then we did it again and won again. So, there’s a really cool formula there.”

Each team is motivated to make the most of the opportunity for a win. The Jets will try to build momentum off last week's 27-24 overtime win over Tennessee.

The Falcons, who are the home team, will try to recover from last week's 34-30 loss to Washington and take their second win before their bye week.

The Falcons have l ost nickel back Isaiah Oliver to a season-ending knee injury and may be without safety Erik Harris, because of a calf injury. There could be more significant roles for rookies Avery Williams, who played behind Oliver against Washington, and Richie Grant.

A makeshift Atlanta secondary could provide New York rookie quarterback Zach Wilson an opportunity for another productive week. Wilson passed for 297 yards with two touchdowns and an interception against the Titans.

Wilson showed off his arm in the win over Tennessee.

The rookie quarterback had a 53-yard touchdown pass to Corey Davis in the fourth quarter, a play during which Wilson rolled to his right, pointed downfield and waved his receiver to keep running. Wilson had an even longer play earlier in the game, a 54-yard toss to Keelan Cole in the third quarter on a third-and-6 play.

“That’s fun,” Cole said. “... That was definitely him wanting more from the play than just taking a shorter play, someone in the flat who was open. He just took a chance. He wanted more.”

Wilson has completed 11 passes of 25 or more yards this season, tied for the fourth most in the NFL.

Quarterback Matt Ryan said his plan will be to “get my body right” while acclimating to the time change. He said teammates might take advantage of “a little bit of spare time for them to get out, see the world a little bit.”

“I haven’t heard any of that,” Ryan said with a laugh.

The Jets thought their pass rush was going to take a hit when Carl Lawson was lost for the season in training camp.

It turned out the rest of the defensive line is picking up the slack.

New York had seven sacks against Tennessee last week, giving the Jets 13 for the season – a total that ties them with Minnesota for fourth in the NFL, just one off the league lead.

“They’re the heartbeat of that side of the ball and they take ownership in that,” Saleh said of the defensive front.

Smith said he doesn't know if he'll keep his new beard. He said “sometimes I get reminded that there sure is a lot of gray going in your beard, and there’s a lot of gray in my hair, too.”

Meanwhile, Smith nixed the “Believe” sign that was on the wall at last week's news conference. The sign was a takeoff on the “Ted Lasso” TV show based on the fictional hapless English soccer team AFC Richmond.

“I’m a huge fan of the show, but that has nothing to do with us,” Smith said. “I don’t view us as the same spot as AFC Richmond.”

When asked about the beard, Smith said he's not looking to emulate Jason Sudeikis’ character on the TV show.

“I’m not going to get off the plane with a mustache, a visor and an AFC Richmond tracksuit,” he said.

Many Jets fans clamored for the team to sign an experienced veteran cornerback in the offseason, but New York stood pat.

Saleh instead stuck with inexperienced youngsters, and that has so far looked like a good move. The cornerback group of Bryce Hall, Brandin Echols, Javelin Guidry and Michael Carter II has performed better than expected, especially since Echols and Carter are rookies and Hall and Guidry are only in their second seasons.

Hall is the No. 1 cornerback, but Saleh and defensive coordinator Jeff Ulbrich have been rotating Echols and Guidry on the outside, as well as Guidry and Carter in the slot.

“They’re getting better every day, that’s the best part about it,” Saleh said. “They’re going to continue to get challenged."