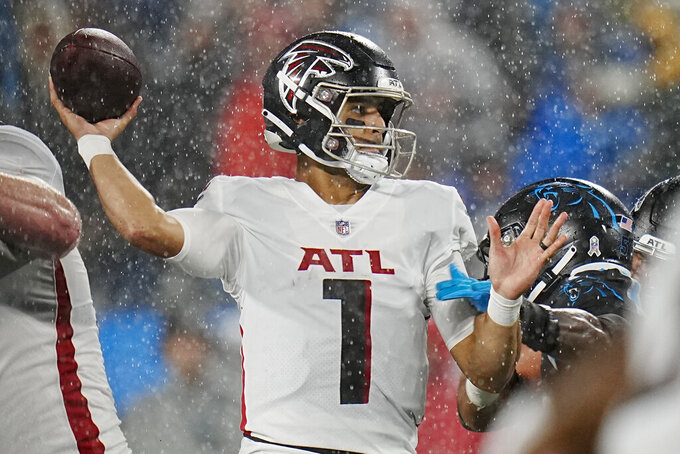 Atlanta Falcons quarterback Marcus Mariota passes against the Carolina Panthers during the second half of an NFL football game on Thursday, Nov. 10, 2022, in Charlotte, N.C. (AP Photo/Rusty Jones)

FLOWERY BRANCH, Ga. (AP) — Arthur Smith quickly put an end to speculation that extra time between games for the Atlanta Falcons would provide an opportunity for the coach to make a change at quarterback.

Asked Monday about the quarterback situation, Smith said “There's no situation. There was never a situation, ever.”

Mariota completed 19 of 30 passes for 186 yards with two touchdowns and one interception in Thursday night's 25-15 loss at Carolina. Mariota led the team with 43 rushing yards.

The Thursday night game provided extra time off for the Falcons (4-6) before Sunday's home game against Chicago. That time was not devoted to a move at quarterback. Rookie Desmond Ridder is still waiting to take his first snap as the Falcons prepare to face the Bears.

“If we were going to make a change, I’d tell you,” Smith said.

Smith said “everything is up for grabs every week. If we felt that one move would certainly be the difference in us winning and losing, we'd make it. We're not at that point at a lot of spots.”

For the season, Mariota has completed 61.9% of his passes for 1,747 yards with 12 touchdowns and seven interceptions. His dual-threat skills were seen as a good fit for Smith's run-first offense when Atlanta was 4-4 and tied for the NFC South lead.

Back-to-back losses to the Los Angeles Chargers and Carolina have led to more questions about Smith's plan at quarterback, even though the Falcons clearly have other problems.

Mariota accepted blame for “playing a little bit outside of myself” in the loss at Carolina.

“I was just trying to create a spark,” Mariota said Thursday night. "I think looking throughout my career, that’s when I get myself in most trouble. Ill-advised throws. Force things on the field. Instead of just maybe scrambling, getting a few yards and keeping the chains moving.”

The Falcons are still only one game behind first-place Tampa Bay in the weak NFC South, making it more difficult for Smith to consider turning the offense over to Ridder, this year's third-round draft pick from Cincinnati.

Through Sunday's games, the Falcons rank fourth in the league with 160.4 rushing yards per game, but rank ahead of only Tennessee and Chicago in passing, averaging 156.8 per game.

There is no assurance a switch to Ridder would add more balance to the offense. Smith's commitment to a balanced running game led by Cordarrelle Patterson and rookie Tyler Allgeier has helped keep the Falcons competitive.

Four of the Falcons' first five losses were one-score games, and they were within seven points against the Panthers before a change of possessions on downs set up Carolina's last-second field goal for the 10-point win.

The Falcons have other problems, including on both lines. The offensive line gave up five sacks to the Panthers and the defense allowed 232 yards on the ground. Now the Falcons defense must prepare for Chicago's league-leading running game.

"Chicago is going to come in here and try to run it 500 times and so we’ve got a lot of work ahead of us,” Smith said.

Smith said cornerback A.J. Terrell, who has missed three games with a hamstring injury, may return this week.