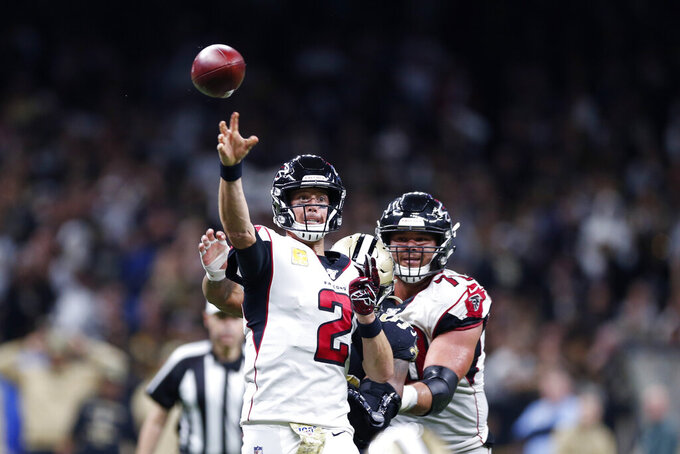 Atlanta Falcons quarterback Matt Ryan (2) throws a touchdown pass to running back Brian Hill, not pictured, in the second half of an NFL football game against the New Orleans Saints in New Orleans, Sunday, Nov. 10, 2019. (AP Photo/Rusty Costanza)

The records really didn't matter in this matchup of NFC South Division rivals — as Payton had insisted days earlier.

Sacking Brees six times and holding New Orleans without a touchdown, the Falcons ended their six-game slide with a 26-9 victory over the Saints on Sunday that ended New Orleans' six-game winning streak.

"It felt really good and encouraging and motivating," said Jarrett, who had a team-leading 2 ½ sacks. "It was like you want to get more and more, you know? So we've got to build off of this performance, definitely."

It was a stunning improvement for a Falcons' defense that came in with an NFL low-seven sacks. It happened against a Saints offensive line that had allowed 12 sacks through their first eight games.

"We didn't play well enough to win today, really, against anybody," Payton said.

Matt Ryan, returning from an ankle injury that sidelined him in the game before the Falcons' Week 9 bye, was 20 of 35 for 182 yards and two touchdowns.

"Winning is always a good tonic, regardless of how the season is going," Ryan said. "Obviously, our backs are against a wall with where we put ourselves at this point in the season. I'm proud of the way that we've taken that first step."

Ryan's first touchdown went for 8 yards to tight end Austin Hooper in the second quarter and his second to running back Brian Hill in the fourth quarter to put Atlanta (2-7) in front 20-9.

That was more than enough with the Falcons' defense frustrating first-place New Orleans (7-2) throughout.

"For them to hold a really good New Orleans offense to just three field goals is impressive," Ryan said. "A good team effort across the board and certainly one we needed."

The Saints had not been held without a touchdown at home with Brees running the offense since the record-setting QB joined New Orleans in 2006. But it was the second time this season the Saints had not found the end zone at home — the first a 12-10 victory over Dallas with backup Teddy Bridgewater filling in for a then-injured Brees.

"They played better than us," Payton said. "This league is too good week-to-week where you can go in and not be focused and ready."

Quinn was struck by how good the coverage was, giving pass-rushers more time to get to Brees.

"For the guys to work in concert together — communication, technique — I thought that was a real big piece and one of the topics we were going into the game wanting to measure," Quinn said.

Julio Jones caught three passes for 79 yards — including a 54-yarder to set up a field goal — for Atlanta, which possessed the ball nearly 34 minutes and rolled up 317 yards. The Falcons were the first Saints opponent since Seattle in Week 3 to gain more than 257 yards.

Brees went 32 of 45 for 287 yards and the Saints finished with 310 yards, well below their average of 375.3 coming in. That's despite getting running back Alvin Kamara and tight end Jared Cook back from injuries. Other than receiver Michael Thomas, who caught 13 passes for 152 yards, few Saints offensive regulars approached their usual production.

The Saints committed 12 penalties for 90 yards. Half of those infractions produced Falcons first downs and four extended drives on third or fourth down.

With 9:01 left, J.T. Gray, who had blocked a punt in Chicago in Week 7, committed a 15-yard, roughing the kicker penalty trying to block another. That led to Younghoe Koo's 48-yard field goal, which widened Atlanta's lead to 23-9.

Falcons: Running back Devonta Freeman left with a foot injury. Defensive back Damontae Kazee was treated after tackling Saints running back Latavius Murray in the third quarter. Hooper limped off early in the fourth quarter. ... Safety Kemal Ishmael received treatment on the field in the final minutes but walked to the sideline.

Saints: Cornerback Marshon Lattimore left with a thigh injury and guard Andrus Peat left with an arm injury in the first half.

Falcons: Visit Carolina on Sunday for the first matchup of the season between the NFC South foes.

Saints: Visit Tampa Bay on Sunday, looking for a season sweep of the Buccaneers.

By Josh Dubow 5 hrs ago
By Teresa M. Walker 8 hrs ago
10 hrs ago
By Arnie Stapleton 9 hrs ago
By Steve Megargee 11 hrs ago