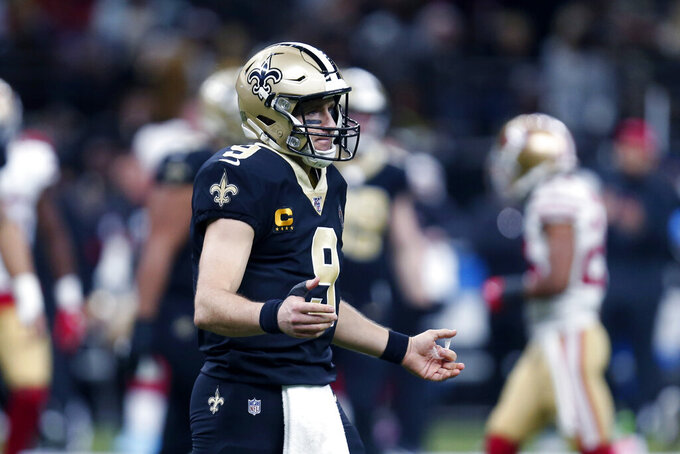 NEW ORLEANS (AP) — Jimmy Garoppolo decisively delivered a fourth-down pass to George Kittle with time running out, and the veteran tight end vigorously galloped up the sideline, embracing an opportunity to defiantly jerk his head back and forth as a Saints defender grabbed his face mask.

“Run through people, but have a good time doing it,” Kittle said of his mindset, which seemed to be contagious across his team.

With that adrenaline-fueled play — which netted 53 yards after the Saints' penalty — Drew Brees' late-game heroics moments earlier were virtually undone and the 49ers took a crucial step toward securing the top playoff seeding in the NFC.

Garoppolo finished with 349 yards and four touchdowns passing. His clutch connection with Kittle on fourth-and-2 from the San Francisco 33 was his 26th and final completion on 35 attempts.

“I know a lot of people are still looking at him to see what kind of player he is, but I'm telling you he's a baller,” 49ers receiver Emmanuel Sanders said. “When you've got somebody like Jimmy with the personality he has and the hard work he puts in, in the clutch moments, he's not going to fold.”

The Saints took their last lead on Brees' fifth touchdown pass of the game — an 18-yarder to Tre'Quan Smith with 53 seconds left. But Brees' pass on an attempted 2-point conversion fell incomplete, leaving New Orleans' lead at one point.

“This was like a heavy weight boxing match, just trading punches all game long," Brees said. “We had a chance to win, and so did they. Unfortunately they were the ones who came out on top.”

The victory kept San Francisco (11-2) in pole position to capture the top seed in the NFC playoffs. The 49ers had the best record in the conference after Seattle (10-3) lost to the Los Angeles Rams on Sunday night.

Sanders had a 75-yard touchdown in he which fell backwards making a catch, got up and broke saftey Vonn Bell's tackle on his way to the end zone. He later added his second-career touchdown pass after taking a toss on a reverse and finding running back Raheem Mostert wide open down the right side for a 35-yard score.

“We knew we were going to have to do some things like that because it’s a very, very sound defense," 49ers coach Kyle Shanahan said. “We knew we had to take some risks.”

Brees finished 29 of 40 for 349 yards and also dived across the goal line for a touchdown. Michael Thomas caught 11 passes for 134 yards and a score, but the Saints (10-3), who already are the NFC South champions, were done in by a few critical failures.

Alvin Kamara's fumble, recovered by DeForest Buckner on the New Orleans 20, set up Garoppolo's 5-yard touchdown pass to Kittle in the third quarter.

An aggresive and risky decision by Saints coach Sean Payton backfired at the end of the third quarter when Taysom Hill's long pass on a fake punt fell incomplete. Smith, the intended receiver, was being physically impeded as he tried to make the catch. But officials noted that pass interference could not be called on a pass made out of apparent punt formation.

The 49ers took over on their 45 and parlayed the turnover on downs into a 14-play touchdown drive that ate up seven minutes, ending with Bourne's second score on a 6-yard catch.

Brees had forecast that the Saints would have a plan to handle the Niners' vaunted defensive line. They backed it up early with TD drives on New Orleans' first four possessions. The first two ended with scoring passes of 38 and 26 yards to Cook. But on Cook's second TD, he was knocked out of the game on a hard hit to the head from cornerback Ahkello Witherspoon, who was penalized for unnecessary roughness.

The Saints chose to take the penalty immediately, rather than on the kickoff, and move the ball to the 1-yard line for a 2-point try that failed.

Brees said Cook's departure was “definitely a factor,” adding, “you certainly miss a guy like Jared.”

The 49ers kept pace with touchdowns on four of their first five possessions.

He completed a 15-yard pass in 2011 with Pittsburgh and didn't throw again until his 28-yard touchdown pass with Denver last season.

As for his latest, Sanders said, “I kind of like just threw it up, pretty much,” adding that Shanahan, “did a great job” working that play into the game plan.

“You want to talk about him and Sean Payton going toe to toe and players executing, it was just a beautiful game,” he said.

49ers: Defensive end Dee Ford left in the first half with a hamstring injury and center Weston Richburg left in the third quarter with knee and ankle injuries.

Saints: In addition to Cook's concussion, defensive tackle Sheldon Rankins had an ankle injury and defensive end Marcus Davenport left with a foot injury in the fourth quarter.