Garrett shines for Rams, but Raiders hold on for 17-16 win 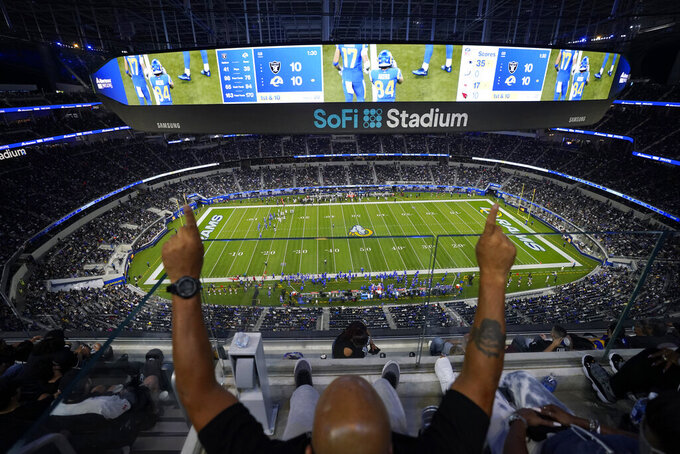 A fan cheers from the upper deck at SoFi Stadium during the second half of a preseason NFL football game between the Los Angeles Rams and the Las Vegas Raiders on Saturday, Aug. 21, 2021, in Inglewood, Calif. (AP Photo/Jae C. Hong) 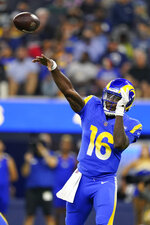 He put it into action with a dominant three-play sequence during an impressive second quarter in the Rams’ 17-16 loss to the Las Vegas Raiders on Saturday night.

Garrett split a sack with lineman Jonah Williams, batted down a pass by Nathan Peterman and got a strip-sack.

“I was tired,” Garrett said. “I almost tapped, I almost tapped. But it was just go, go. It was fun, but next play, that’s the biggest thing.”

The Rams do not have many proven options at outside linebacker behind Leonard Floyd, but the 6-foot-4, 245-pound Garrett has looked like another late-round find for Los Angeles through two preseason games. The seventh-round draft pick from Division II Concordia St. Paul, tipped Peterman’s pass at the line of scrimmage in the second quarter, leading to an easy interception for safety J.R. Reed.

On the next play from scrimmage for the Raiders, Garrett dropped running back Trey Ragas for a loss of 6 yards. That was just a preview of how Garrett would finish off the drive.

“He made a big impact,” Rams coach Sean McVay said. “He was applying pressure consistently. Big second quarter, and really you’ve seen him start to make steady improvements. And I think we always talk about it, you know, where that practice performance and preparation equals game reality, and tonight was an example of that for Chris and he’s continuing to get better.”

Peterman threw a 29-yard touchdown pass to Marcell Ateman in the fourth quarter, taking advantage of busted coverage to find him all alone on a double move with 6:58 remaining to engineer his second straight preseason win. Peterman was 16 of 24 passing for 172 yards with two interceptions and added 35 yards rushing.

Bryce Perkins threw a 2-yard touchdown to tight end Jacob Harris with 15 seconds remaining, but his pass intended for Harris on the 2-point conversion that could have won the game was incomplete.

“I like our grit,” Raiders coach Jon Gruden said. “Our young people have gotten better and found a way to win two football games, no matter what the stakes are.”

Raiders LB Nicholas Morrow and OL Richie Incognito did not dress after sustaining injuries Thursday during the second of two days of joint practices with the Rams. Gruden said there is concern Morrow’s foot injury might be serious. Incognito is dealing with a calf strain and could be available for the season opener.

Raiders LB Javin White, DE Malcolm Koonce and Rams LT Tremayne Anchrum Jr. were all injured on the same play early in the third quarter. White sustained a knee injury that left him unable to put any weight on his left leg.

McVay said Rams RB Raymond Calais injured a foot in the third quarter and it will likely require surgery.

Perkins was 26 of 39 passing for 208 yards, two touchdowns and one interception as he played the whole game for the Rams. He followed up his highlight-reel hurdle of Chargers cornerback Kedon Hall last week by shaking free from the grasp of Raiders defensive lineman Kendal Vickers and scrambling to move the chains on fourth down late in the fourth quarter. Perkins finished with 41 yards on the ground.

Rams kicker Matt Gay also handled punting duties after Johnny Hekker and Corey Bojorquez were placed on the COVID-19 list earlier on Saturday. Gay, the only specialist dressed for the game, averaged 42 yards per punt on four attempts. He made a 36-yard field goal in the second quarter, but his 43-yard attempt in the fourth quarter was blocked by Darius Philon.

The Raiders chose to have their first-stringers go through warmups before most called it a night. But Las Vegas did play its top two draft picks: right tackle Alex Leatherwood and safety Tre’von Moehrig. Leatherwood was impressive at the goal line, pushing defenders back well into the end zone on consecutive run plays.

Raiders: Return to the Bay Area to play at San Francisco in their third preseason game next Saturday.

Rams: Visit Denver to wrap up the preseason next Saturday.