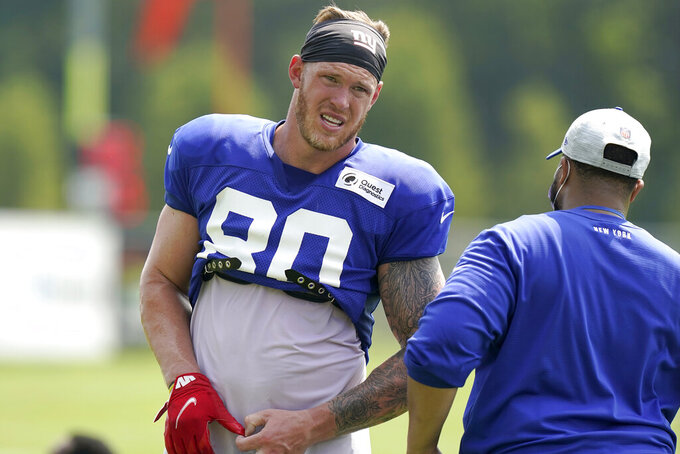 FOXBOROUGH, Mass. (AP) — Veteran tight end Kyle Rudolph is finally getting on the field with the New York Giants, at least on a limited basis.

The Giants on Wednesday announced Rudolph has passed his physical and was taken off the physically unable to perform/active list. He had offseason foot surgery and had been unable to practice since training camp started just under a month ago.

One of the team's biggest acquisitions in free agency, it is uncertain whether Rudolph will be ready for the season opener on Sept. 12 at home against Denver. He spent the first 10 seasons of his career with the Minnesota Vikings, playing in 140 regular-season games and catching 48 touchdown passes but had only one last season.

After the Giants finished their joint workout with the Patriots on Wednesday, Rudolph said watching camp the past month has been tough.

Evan Engram is the team's top pass-catching threat at tight end. Rudolph was expected to offer quarterback Daniel Jones a second option and also help with the run blocking.

“He’s a receiving threat, he’s a blocking threat, he’s really smart in the film room,” Engram said. “I learn from him. Every meeting he teaches me something, and I know it’s the same for the rest of the guys. He literally is going to help us in every aspect of the game and I’m really excited about it.”

Rudolph wasn't going to speculate on whether he would be ready for the opener. He said he will try to improve daily and see where it takes him.

“I’m 31 years old and I’ve played a lot of football,” he said. “I feel pretty much everything. That’s just the nature of this game, but I tell you one thing I felt — it felt damn good to be back out on the practice field today.”