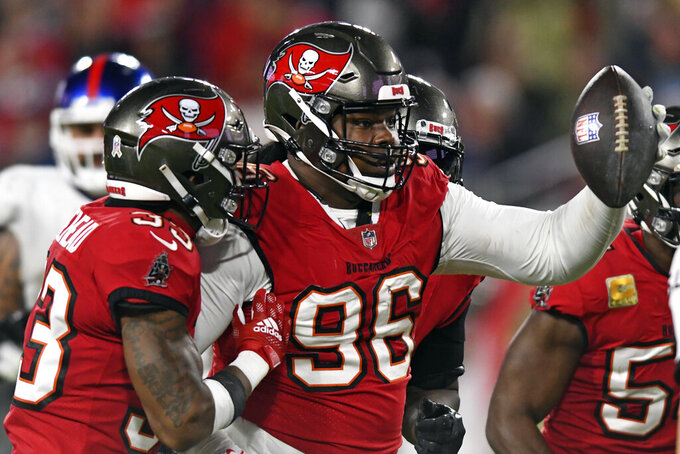 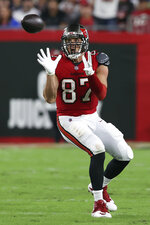 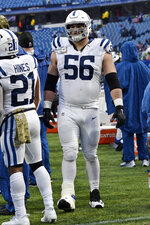 BETTING LINE: Tampa Bay by 3, according to FanDuel SportsBook.

TURNOVER DIFFERENTIAL: Buccaneers plus-5; Colts plus-15.

BUCCANEERS PLAYER TO WATCH: QB Tom Brady has tormented the Colts throughout his career, going 15-4 and throwing 38 touchdown passes in 19 career games against Indianapolis — all with New England. He starts Week 12 ranked second in the NFL with 3,177 yards passing. Brady also has thrown a league-high 29 TD passes.

COLTS PLAYER TO WATCH: RB Jonathan Taylor. Over the past month, nobody has been more impressive. He's the league's first 1,000-yard runner this season and has tied the NFL record with eight consecutive games of 100 yards from scrimmage and at least one touchdown. If he does it again Sunday, he'll break the tie with Lydell Mitchell and LaDainian Tomlinson — and help the Colts play keep away against Brady.

KEY MATCHUP: Taylor vs. Bucs' run defense. After producing 185 yards rushing, 204 yards from scrimmage and five TDs against the NFL's No. 1 defense last week, Taylor faces another daunting challenge this week. Tampa Bay's run defense was the league's best each of the past two years and is yielding a league-low 78.4 yards per game this season. It should be one of this week's feature attractions.

KEY INJURIES: The Buccaneers got back CB Sean Murphy-Bunting (dislocated elbow) from injured reserve Monday night and coach Bruce Arians said Murphy played “better than expected.” Tampa Bay's other starting cornerback, Carlton Davis (quad), is still on injured reserve though he returned to practice Wednesday and could be activated for Sunday's game. DT Vita Vea (knee) sat out against the Giants, but Arians thinks he could return at Indy. The Bucs are expected to provide updates on WR Antonio Brown (ankle) and G Ali Marpet (oblique). ... Indy's biggest question is three-time All-Pro left guard Quenton Nelson (ankle). Coach Frank Reich said he wouldn't practice Wednesday and listed him as day to day. Starting safety Khari Willis (calf) could be activated from injured reserve this week.

SERIES NOTES: Tampa Bay has won two of the last three against Indy. ... The Baltimore Colts won the first meeting 42-17 in 1976, the third game in Bucs history. ... Peyton Manning rallied the Colts from a 21-point deficit in the final four minutes of regulation before beating the Bucs 38-35 in overtime on Oct. 8, 2003. ... Hall of Fame coach Tony Dungy finished his career in Tampa Bay with a then-franchise-record 96 wins and finished his Indianapolis career with a franchise-record tying 112 wins.

STATS AND STUFF: Bucs coach Bruce Arians won the first of two NFL Coach of the Year Awards in 2012 as Colts interim coach following Chuck Pagano's cancer diagnosis. .. Brady has topped the 3,000-yard mark for the 19th time in 22 seasons and has thrown at least two TD passes in eight straight regular-season games against Indy. ... Tampa Bay TE Rob Gronkowski had seven TD receptions and one TD run against the Colts during his career in New England. ... Bucs WR Mike Evans and the Rams' Cooper Kupp share the NFL lead with 10 TD receptions. Evans has four seasons with 10 or more, one short of matching Larry Fitzgerald and Hall of Famers Marvin Harrison, Randy Moss and Terrell Owens for the most over the past 20 seasons. ... Taylor needs 70 yards rushing to pass Hall of Famer Marshall Faulk (2,360) for second most in franchise history during a player's first two seasons. His next TD also will break a tie with Mitchell, Harrison, Joseph Addai and Hall of Famers Lenny Moore and Eric Dickerson for the fourth-highest single-season total in franchise history. The six are tied with 15 scores. ... With two TD passes, Colts QB Carson Wentz will reach 20 for the fourth time in his career. ... Indy RB Nyheim Hines needs four receptions for No. 200. ... Two-time All-Pro LB Darius Leonard is six tackles away from becoming the sixth player in Colts history with 500. ... Indy leads the NFL with 76 first-quarter points and 98 points off a league-high 25 takeaways. ... Robert Mathis, the Colts' career sacks leader (123), will join the team's Ring of Honor on Sunday. The ceremony was initially scheduled for last year but was rescheduled because of the COVID-19 pandemic. Mathis is a Pro Football Hall of Fame semifinalist for the class of 2022.

FANTASY TIP: Taylor has become the most consistent play over the past few weeks. Even against the Bucs' strong defense, fantasy players would be wise to ride the hot hand again.