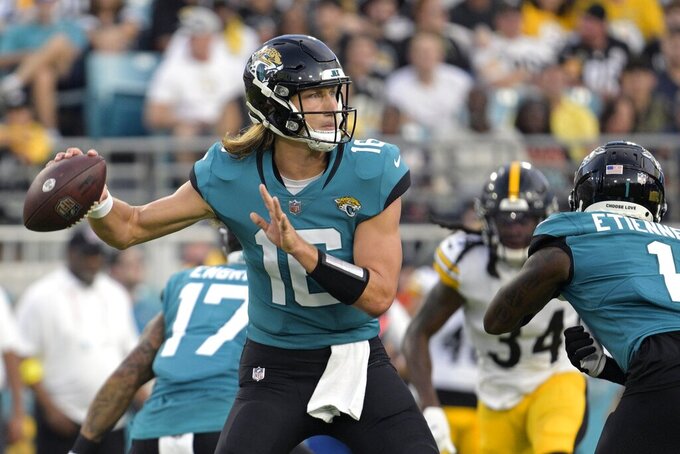 Jacksonville Jaguars quarterback Trevor Lawrence (16) looks for a receiver during the first half of an NFL preseason football game against the Pittsburgh Steelers, Saturday, Aug. 20, 2022, in Jacksonville, Fla. (AP Photo/Phelan M. Ebenhack)

FLOWERY BRANCH, Ga. (AP) — The Jacksonville Jaguars and Atlanta Falcons are expected to emphasize the competitions for the final roster spots in Saturday's final preseason game for both teams.

That means Jaguars quarterback Trevor Lawrence, like most starters, is expected to be an observer in his return to his home state. Lawrence expressed confidence in his play and the Jaguars' offense as the 2021 No. 1 overall draft pick prepares for his second season.

“I really like where I’m at,” Lawrence said Wednesday. “As far as offense goes, I feel really comfortable. I’m feeling more and more confident each day and feel really good with where I’m at with all the receivers, tight ends, running backs, protection.”

The Jaguars and Falcons had their second joint practice on Thursday.

Falcons coach Arthur Smith hasn't revealed plans for his starters. There likely will be extended playing time for rookie backup quarterback Desmond Ridder. Veteran Marcus Mariota is set to open the season as the starter.

Asked Thursday about his plan for the game, Smith said, “That’s something we’ll finalize tonight and tomorrow as a staff. I feel pretty good for where we’re at and have gotten guys reps. ... We’ll weigh that and opportunities for some young guys who need to get more work.”

Mariota, the No. 2 overall pick in the 2015 draft, hasn't started a regular-season game since 2019. He is looking to revive his career in his reunion with Smith, his former offensive coordinator with the Tennessee Titans.

Mariota appeared to strengthen his hold on the starter's job by leading scoring drives on two of his three possessions in Atlanta's 24-16 preseason loss at the New York Jets last week. He left the game with a 10-0 lead.

Lawrence, from Cartersville, Georgia, hasn't had an opportunity to play an NFL game in Atlanta. He completed 23 of 42 passes for 228 yards with one touchdown and one interception in a 21-14 home loss to the Falcons on Nov. 28 last season.

The loss to the Falcons was one of many low points in Lawrence's rookie season. He led the NFL with 17 interceptions and threw only 12 touchdown passes. He also was hurt by nine fumbles and 32 sacks.

The Jaguars finished 3-14 with Lawrence and are 0-3 this preseason. Even so, Lawrence could be poised for a big season with the Jaguars' new leadership of Pederson and offensive coordinator Press Taylor.

Lawrence said Pederson and Taylor are “very conversational” in the way they involve the quarterbacks in planning.

Taylor said Lawrence has made a smooth adjustment to the new staff.

“We’re exactly where we would like to be with Trevor at this point and time,” Taylor said.

The teams practiced in pads on Wednesday and there was no tackling on Thursday, when Lawrence was sharp when throwing two scoring passes to Marvin Jones.

NOTES: Pederson said RB James Robinson, returning from an Achilles injury in December, “really looks like he’s been out there several weeks now, quite honestly” and could soon be cleared for contact. ... Former Falcons LB Foye Oluokun had an interception on a pass from Mariota off RB Avery Williams' hands. Oluokun, who signed a $45 million, three-year deal with Jacksonville as a free agent, said Smith “made a joke about return on investment. I might as well make one play if I left for that much.”