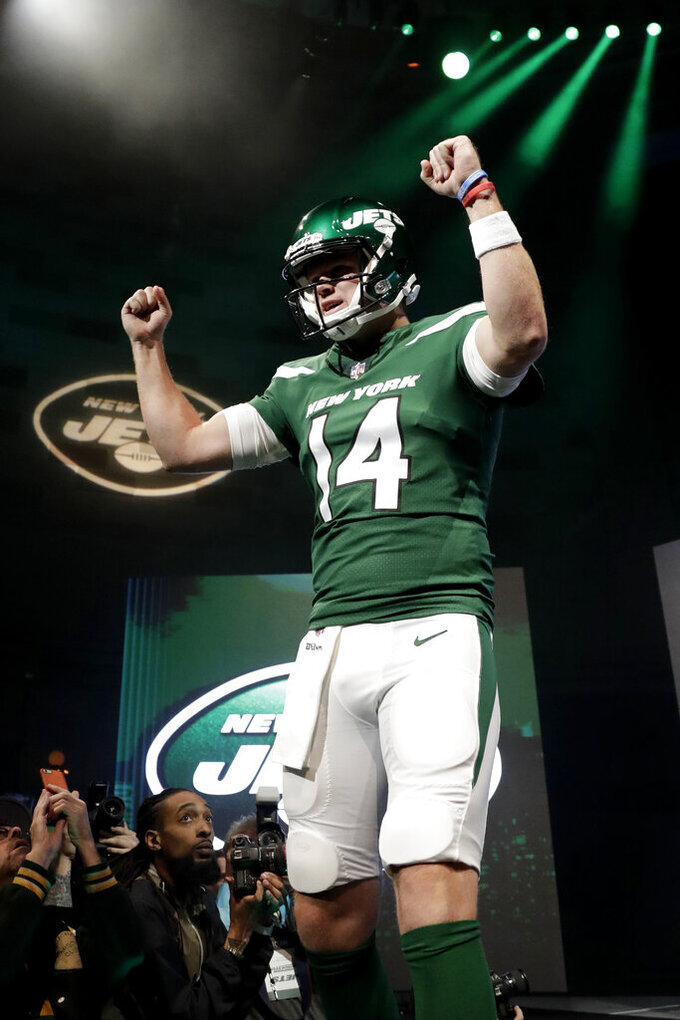 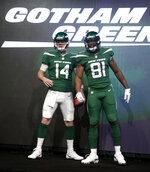 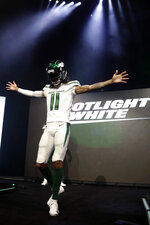 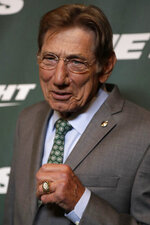 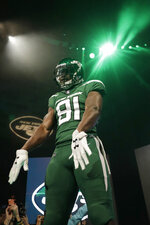 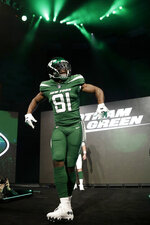 NEW YORK (AP) — Jamal Adams believes this is the dawning of a new era for the New York Jets.

There's a new coach in Adam Gase. They've got a handful of new players, including star running back Le'Veon Bell. And, now, the Jets have a new look on the field.

The team unveiled revamped uniforms and a tweaked team logo at an event in midtown Manhattan on Thursday night. It marks the first time the franchise has rebranded its uniforms, apparel and merchandise since 1998.

The uniforms will feature combinations of a unique shade of green called "Gotham Green" — a change from the team's familiar hunter green — and "Spotlight White," along with "Stealth Black" that's featured in an alternative uniform the team can wear up to three times in a season. The jerseys also feature "New York" in small letters across the chest and above the players' numbers.

The shiny helmet is all green, replacing the white headgear the players wore the last 20 years. The refreshed logo features the letters "JETS" in white, with a white football under it.

It's all part of a team-wide rebranding through a process that began in 2014, with the Jets working closely with the NFL and Nike. The new colors and logo will be plastered all over their facility in Florham Park, New Jersey, as well as throughout MetLife Stadium for home games. There will also be modifications made to the end zones and walling inside the stadium, along with video graphics.

"This was a process that underwent a variety of prototyping and design work to ensure a flawless finish," team president Neil Glat said in a statement. "We took great pride in ensuring that every detail — big or small — was correct and that our ownership's vision was implemented."

Jets owner Christopher Johnson was all smiles about his team's new look, saying it was time to refresh things for the franchise.

"I think it came out pretty great," Johnson said.

More than 400 fans were in attendance for the unveiling, which was hosted by comedian J.B. Smoove. Former Jets stars Joe Namath, Wayne Chrebet, Curtis Martin, Freeman McNeil, Marty Lyons and Nick Mangold were also there to see the new uniforms and logo, as were "Saturday Night Live" star Pete Davidson, and a small contingent of WWE stars.

It all capped what has been a busy offseason for the Jets.

Along with Bell, the Jets signed wide receiver Jamison Crowder, linebacker C.J. Mosley, cornerback Brian Poole and kicker Chandler Catanzaro, along with acquiring left guard Kelechi Osemele from Oakland. They also have the third overall pick in the upcoming NFL draft, and could target an edge rusher — still a need for the team — or general manager Mike Maccagnan could trade it for more selections.

"Our team really did a 360 (degree turn quickly)," Anderson said.

And he believes that the Jets, who finished 4-12 last season, could challenge the reigning Super Bowl champion New England Patriots for first place in the AFC East this season.

"We're not coming out there to lose," Anderson said.