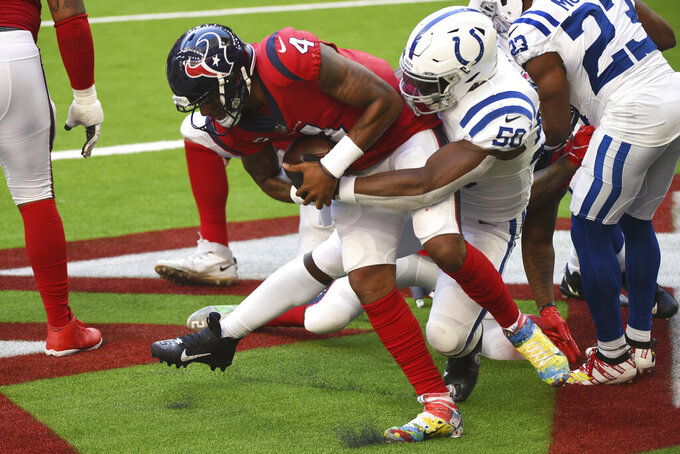 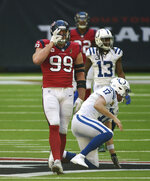 HOUSTON (AP) — Deshaun Watson sat alone on the bench, a towel covering his face and his head in his hands for several minutes on Sunday after yet another frustrating loss by the Houston Texans.

This one to the Indianapolis Colts hurt the most because the Texans believed they were so close to a win.

Houston had a chance to take the lead with about 90 seconds left. They were at the Colts 2 when Watson fumbled a low snap and Anthony Walker pounced on it to secure Indy’s 26-20 victory.

“I should have just caught the ball,” Watson said. “I know it was a little low and hot, but for me I take pride in catching every snap regardless of where it is and how fast it is.”

The Colts (8-4) led 24-20 at the break after Phillip Rivers threw TD passes of 21 and 39 yards. Their offense didn’t score after that, but the defense held Houston (4-8) scoreless in the second half and Justin Houston added a safety with a sack of Watson in the end zone.

Watson threw for 341 yards and ran for a score in the first half. But he did not have a touchdown pass for the first time this season and threw an interception after not being picked off in the last six games.

Watson was still emotional more than an hour after the game, choking up more than once while talking to reporters. He spoke candidly about the toll losing has taken on him.

“This (expletive) hurts,” he said. “I’m tired of losing. Being so close over the years, it’s just tough. It’s tough.”

A state champion in high school and the winner of a national championship at Clemson, Watson has struggled to deal with the disappointment.

“As a player over my career, even back in Little League, you haven’t lost as many games, it’s tough to handle,” he said. “You hold so much weight on your shoulders where it just becomes a breaking point.”

Interim coach Romeo Crennel was impressed with his team's effort even though the Texans came up short.

“We fought all the way to the end, we felt like we were going to win it, and except for one play, we probably would have won it. But we didn't win it," he said. “But I told those guys to hold their heads up because their will to win was exhibited today on the football field."

The Colts had a chance to add to their lead with about seven minutes left, but Jonathan Taylor was stopped for no gain on fourth-and-1 from the Houston 5.

Indianapolis added to its lead three plays later when Houston sacked Watson in the end zone to make it 26-20.

The Colts had two penalties on the ensuing drive and punted to give the Texans that last chance.

Crennel raved about the performance of Coutee, who was inactive for eight of Houston's first nine games.

Defensive end J.J. Watt was frustrated by the loss but was quick to defend Houston's offense after the game.

“Our offense has done a great job many times in bailing us out on defense, so I’m not going to sit here and say anything about our offense," he said. “The situations have been flipped many times. I know those guys feel so bad about what happened, obviously, wish they could have it back, and I know how that feels. We all wish we had that win."