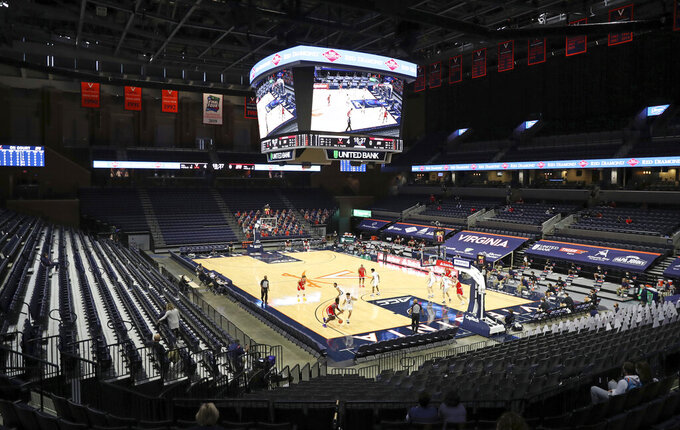 The Sun Belt Conference championship game Saturday between No. 9 Coastal Carolina and No. 17 Louisiana-Lafayette has been canceled because of a positive COVID-19 test within the Coastal Carolina program.

An entire position group would have been unavailable to play because of contact tracing.

Both schools were in line for a New Year’s Six bowl spot with a win.

Five backup players missed practice with the Los Angeles Rams on Thursday after a positive COVID-19 test within the organization.

The Rams didn’t reveal which player tested positive, but Evans was listed as being absent from practice with an illness, while the other four players had a different designation on the injury report.

Allen was the first NFL player to publicly disclose he had tested positive for coronavirus back in April.

Hollins and Scott are the biggest contributors to the Rams (9-4) in the affected group. Hollins has played 31% of the Rams’ defensive snaps this season, while Scott has played 18% of the defensive snaps, with his playing time increasing recently.

The Rams host the Jets on Sunday.

DePaul was initially scheduled to play at Hinkle Fieldhouse that night, but COVID-19 issues forced the Blue Demons to call it off.

Southern Illinois and Butler have met three previous times, most recently in December 2007 when A.J. Graves made a 35-foot buzzer-beater to give the Bulldogs a 57-55 victory.

Butler faces Indiana on Saturday at Bankers Life Fieldhouse -- its second game since resuming team activities. The Bulldogs lost at No. 7 Villanova on Wednesday.

The Green Bay Packers plan to host about 250 frontline workers, including health-care professionals and first responders, at their Saturday night game against the Carolina Panthers.

Up to this point in the season, the only spectators for Packers home games have been team employees and their family members.

Packers officials already have announced they won’t have paying fans at any of their home games this season. They haven’t decided whether to allow paying spectators at any home playoff games.

UCLA’s game against Stanford on Saturday will be its final football game of the season after the Bruins announced on Thursday they would decline any bowl invitations.

Athletic director Martin Jarmond and coach Chip Kelly said in a statement that the decision was largely made by the players and supported by the administration.

The Bruins (3-3) and Oregon State are the only Pac-12 programs who have played all six weekends. UCLA has had five COVID-19 cases since testing began in late June.

Giants offensive coordinator Jason Garrett has tested positive for COVID-19 and will miss Sunday night’s game against the Cleveland Browns.

Tight end coach Freddie Kitchens will call the plays against the team he coached last year.

The Giants also announced that cornerback James Bradberry has been placed on the Reserve/COVID-19 list because he was deemed to be a high-risk, close contact of an individual who has tested positive. The contact did not occur at the Giants facility and the individual is not a member of the organization.

Bradberry will remain isolated from the team and continue to participate in meetings remotely.

Given the timing of the close contact, Bradberry will also miss Sunday night’s game against Cleveland. If he continues to test negatively and has no symptoms, he would come off the reserve list on Monday.

Ninth-ranked Creighton will allow a limited number of fans to attend men’s basketball games at CHI Health Center beginning with the game against Xavier on Wednesday.

Under a plan approved by health officials in Omaha, Nebraska, about 1,700 fans can attend. Limited tickets will be offered to season ticket holders based on the athletic department’s priority seating point system.

Fans must wear face coverings and maintain social distancing in and around the arena. Temperature checks will be done at all entrances. Concession stands will be open but no cash transactions will be allowed.

The University of Maine’s men’s ice hockey program has been put on pause because of a case of the novel coronavirus, university officials said Thursday.

The team had been scheduled to play at UMass Lowell this weekend, but that will not happen, officials said.

Student-athletes and staff are in quarantine, they said. The women’s hockey team is scheduled to play in Providence on Friday and Saturday, and those games will continue as planned, officials said.

The No. 2 Baylor men have resumed team activities after a five-day pause in their basketball program because of COVID-19 issues.

Coach Scott Drew said Thursday the Bears are thankful for the clearance to resume practice. They will play their first Big 12 game Saturday at Kansas State after their scheduled conference opener at home last Sunday against No. 11 Texas was postponed because of the pause.

Baylor (4-0) is also scheduled to play at home Monday against Arkansas-Pine Bluff. The Bears have played only one of the first seven games as listed on their original schedule before the season started.

The Maryland-Michigan State football game on Saturday night has been canceled because of an outbreak of COVID-19 at Maryland.

It’s the second time this season the Terrapins and Spartans have been preparing to face each other, only to have the game called off just two days before it was to be held. The same thing happened on Nov. 19 prior to the Nov. 21 scheduled meeting.

That game was also canceled because of an outbreak of COVID-19 at Maryland.

This game, added to the Big Ten schedule as a “plus-one” after the regular season, will not be made up.

IndyCar made the first pandemic-related change to its 2021 schedule Thursday and moved the prestigious Grand Prix of Long Beach from April to September because of California restrictions.

Long Beach, second only to the Indianapolis 500 in prestige and popularity on the IndyCar calendar, was shifted to Sept. 26 and will now be the season finale.

The race was originally scheduled for April 18 but California has tight COVID-19 regulations and construction on the temporary 1.968-mile circuit through the downtown streets of Long Beach begins months ahead of time.

Long Beach was canceled outright in 2020 after 46 consecutive runnings. Long Beach is considered a crown jewel among global street races for its longevity, competitive racing and street festival atmosphere. A three-day race weekend can draw close to 200,000 fans.

With Long Beach as the season finale, IndyCar will close its schedule with a three-race, three-weekend West Coast swing. IndyCar will race at Portland International Raceway, Laguna Seca in California and then Long Beach. All three events were canceled in 2020.

The playoffs in the newly renamed Billie Jean King Cup are moving from February to April as part of a pandemic-restructured, tentative 2021 tennis calendar.

Eight qualifying matchups in the women’s team competition will be held April 16-17, instead of Feb. 5-6.

The International Tennis Federation announced the change Thursday, a day after the ATP said the Australian Open would be moving from a Jan. 18 start to Feb. 8 because of the COVID-19 outbreak.

The Billie Jean King Cup -- formerly known as the Fed Cup -- will have its finals April 13-18 in Budapest, Hungary. The 2020 finals were called off because of the pandemic.

Virginia has added a men's basketball game against top-ranked Gonzaga as the 17th-ranked Cavaliers prepare to restart their program after a 10-day shutdown because of COVID-19 issues.

Virginia announced Friday that it will play the Bulldogs on Dec. 26 in Fort Worth, Texas.

The Cavaliers (3-1) had four games canceled or postponed because of COVID-19, including Saturday's scheduled matchup with No. 7 Villanova at Madison Square Garden. That game would have featured the past two NCAA champions and will not be made up.

Virginia's home game against William & Mary was rescheduled for Tuesday. The Cavaliers plan to return to practice Saturday. The team paused all activities on Dec. 9.

Virginia also had matchups with No. 4 Michigan State and Wake Forest postponed.

The team announced the result Thursday and said Garrett will continue to work remotely.

The Giants will not practice Thursday for Sunday night’s game against Cleveland. Tight ends coach Freddie Kitchens will call the offensive plays against the Browns, who fired him as their head coach last season.

The Giants are working with the league’s chief medical officer to determine close contacts. The Giants were not in their facility on Monday or Tuesday, and most of the coaching staff worked remotely. The team practiced Wednesday.