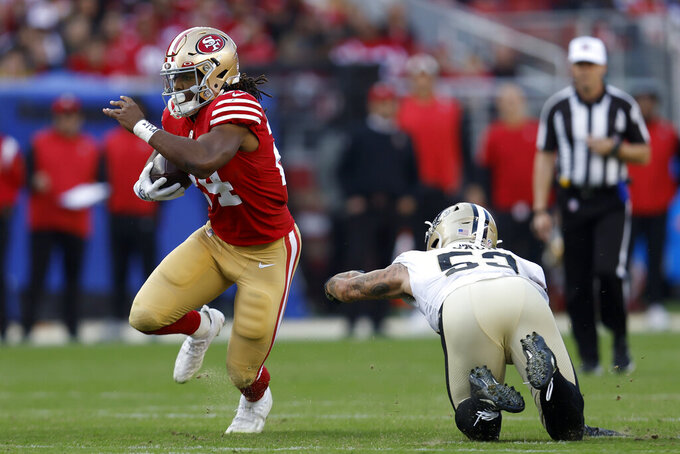 SANTA CLARA, Calif. (AP) — The San Francisco 49ers lost one of their key running backs to a knee injury, but got much better news about their other one.

Christian McCaffrey returned to practice Thursday after dealing with some “knee irritation” during last week's win over New Orleans.

“Everything’s full speed. I feel great,” McCaffrey said after practicing on a limited basis. “Luckily, I might have dodged a bullet.”

Having McCaffrey in the lineup is crucial Sunday after Elijah Mitchell went down with a knee injury last week that is expected to sideline him for the rest of the regular season.

Mitchell had just returned last month from a knee injury that had sidelined him for six games. Mitchell, who led the team in rushing with 963 yards as a rookie last season, was averaging 5.6 yards per carry in his limited work this season.

“It’s brutal,” McCaffrey said. “I’ve been there before. It’s a pretty lonely and miserable place to be. I haven’t known Elijah for a long time, but the one thing I do know is he’s a fighter. The thing that I keep telling him is just to just to keep going. This is a marathon. He’s going to have a marathon of a career. This won’t be the first or the last time that he’s going to have to go through adversity. He’s going to play for a really long time.”

With Mitchell sidelined again and Jeff Wilson Jr. having been traded to this week's opponent, Miami, after McCaffrey was acquired, the Niners will be relying on rookies Jordan Mason and Ty Davis-Price to shoulder some of the load behind McCaffrey.

Mason showed some positive flashes late in last week's win over the Saints with Mitchell out and McCaffrey nursing his sore knee.

The undrafted rookie, who had just five carries the first 10 games, had four of his five carries on the final drive that helped San Francisco run out the final 6:18 in a 13-0 win

Mason finished with five carries for 25 yards, converting two first downs on the final drive and earning a nickname from quarterback Jimmy Garoppolo for wearing a glove only on his right hand.

“He was awesome,” Garoppolo said. "The one glove man. I didn’t know he wore one glove until he was in the huddle with us and it kind of caught me off guard a little bit, but I didn’t want to say it at the time, so I saved it for after the game. But J.P. did a great job. He came in, was real calm. For a rookie to come in that situation and run the clock out like that, getting a couple crucial first downs that was some big stuff.”

Mason had moved ahead of third-round pick Davis-Price on the depth chart but both could be needed Sunday.

After having 14 carries for 33 yards in Week 2, Davis-Price has had just two carries and 14 offensive snaps the last nine games and has been inactive for four straight games.

“He’s hungry to learn” McCaffrey said. “Unbelievably dynamic. He’s fast, physical, can run. Both the young backs are very talented guys who can do a lot.”

NOTES: Arik Armstead (foot, ankle), who has been out since Week 4, practiced again on a limited basis and said he's coming back this week. ... WR Deebo Samuel (quadriceps) missed practice Thursday, a day after being limited. ... G Spencer Burford (ankle) and DL Charles Omenihu (knee) returned to practice on a limited basis.