Missed chances, mistakes costly for Seahawks in loss to Rams 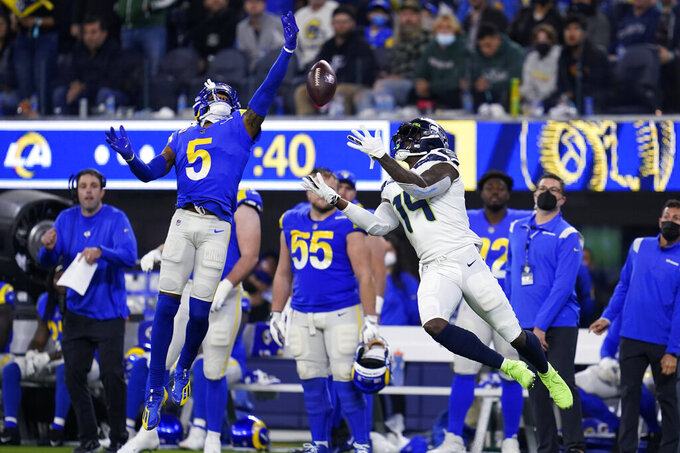 INGLEWOOD, Calif. (AP) — The longest play of the game for the Seattle Seahawks had a bit of luck involved, with Russell Wilson intending for the pass that ended up in Gerald Everett’s hands for a 34-yard catch to go elsewhere.

It was one of the few breaks that went Seattle’s way in a frustrating 20-10 loss to the Los Angeles Rams on Tuesday night. From missed opportunities to missed calls, the Seahawks didn’t have enough of those fortunate circumstances to come away with the win.

That’s been the story of an underwhelming season for the Seahawks (5-9), their first losing campaign in Wilson’s 10 years as quarterback, and those mistakes proved especially costly in a result that has the team out of playoff contention.

“Those are things that really we should be able to get through and it should not even be a factor. Those plays, they didn’t do anything. They didn’t do a thing. We did all that to ourself,” coach Pete Carroll said.

“And we’ve won so many of those moments,” Wilson said. “Key moments, key penalties, key little things like that, those things can’t happen in those kind of tight situations with great teams.”

The Rams (10-4) looked anything but, still missing numerous key players because of COVID-19 even after the game was pushed back two days to accommodate them.

The lack of practice time for the home team resulted in a choppy and erratic offense for much of the game. Seahawks edge rusher Carlos Dunlap capitalized on inexperience at right tackle, where Bobby Evans played with starter Rob Havenstein unavailable, to get two of his three sacks lining up on that side.

But Seattle could not take full advantage, in part because wide receiver Tyler Lockett was absent because of the virus. Not having the 1,000-yard option meant Metcalf spent most of the night dealing with cornerback Jalen Ramsey.

Metcalf had six receptions for 52 yards, but Wilson missed him on a deep ball in the fourth quarter. His throw hung up in the air, allowing Ramsey to recover after Metcalf got open down the sideline and tip the ball away on what could have been a touchdown.

“I felt like I was a little short on DK on that one. I wish I could have had that one back maybe, but other than that I felt like we played a good game,” said Wilson, who was 17 of 31 for 156 yards and one interception.

There was one other incompletion that Seattle was left to rue, a fourth-down pass to running back DeeJay Dallas that was broken up by Ernest Jones, even though the rookie linebacker didn’t turn around to play the ball with 3:21 remaining.

Carroll wasn’t thrilled with the no-call for pass interference, but he wouldn’t pin the loss on that one sequence.

Instead, it was the moments that slipped through the fingers of the Seahawks once again that stuck with Carroll.

“This was a game about opportunities,” he said. “Some of them we captured and some of them we didn’t, and it’s really frustrating to have to live with that.”

By David Brandt 57 minutes ago
By Teresa M. Walker an hour ago
By Josh Dubow 5 hrs ago
By Tom Withers 12 hrs ago
By Dennis Waszak Jr. 12 hrs ago