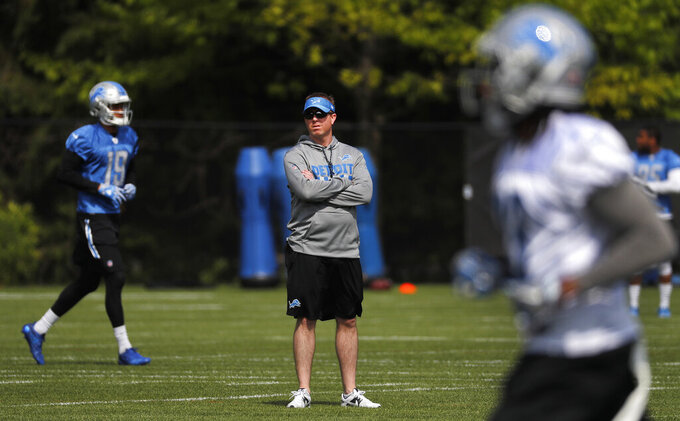 FILE - In this May 24, 2017, file photo, Detroit Lions general manager Bob Quinn watches the NFL football team practice in Allen Park, Mich. “Everyone that works in football and other professional sports sacrifices a lot of family time," Detroit Lions general manager Bob Quinn said earlier this week. “That is just the way it has always been." Unless, there's a pandemic.(AP Photo/Paul Sancya, File)

First in, last out.

NFL general managers and coaches, and those who assist them, work within a highly competitive culture. Putting in extremely long hours is simply understood as part of the job.

They show up early in the morning and often leave late at night — if they even go home at all. Day after day, week after week, month after month.

“Everyone that works in football and other professional sports sacrifices a lot of family time," Detroit Lions general manager Bob Quinn says. “That is just the way it has always been."

Unless there's a pandemic.

The league closed team facilities in March due to the coronavirus outbreak, sending coaches and general managers home. Those with families wound up under the same roof with their wives and kids on a daily basis for an extended period for the first time in their careers.

Even though team headquarters were opened earlier this month, some teams such as the Lions opted to stay in place while continuing to connect with each other via computers and cell phones. And when the NFL allows doors to open for training camp this summer, the Lions will be among the franchises evaluating what standard operating procedures can be altered to help employees strike an improved life-work balance.

“I never thought I could be as efficient working exclusively from home since mid-March," Quinn said. “It has opened my eyes to be able to spend a little less time at the office."

League leaders found out it is possible to pull off a relatively regular offseason in some major ways, conducting the draft, free agency and owners meetings virtually, while making contingency plans for potential delays in the preseason and regular season.

Meanwhile, general managers and coaches discovered that taking care of business for their teams between breaks for meals with family members became an enlightening experience.

“I’ve learned more about myself as a person through this,” Buffalo Bills coach Sean McDermott said. “Just in terms of the patience that has to go into moments like this.”

During the draft, kids were hanging out around their dads while picks were being made, and TV cameras captured the touching scenes not seen before because, well, they didn't happen before.

“I get emotional talking about this because I love these two kids, and I love my wife," Quinn said. “It’s hard to be away from these guys, traveling around to pro days and jumping on flights, getting home late, then sleeping for six hours and going to the office the next morning."

Jacksonville Jaguars coach Doug Marrone tried to take full advantage of the unique opportunity, sitting at the dinner table and stirring up conversations with his family on a regular basis.

“This is a time that I feel like I can make up for maybe some of the things I feel guilty about," Marrone said. “For so many years, I’ve been at work."

Dr. Michael Gervais, a high-performance psychologist, said the pandemic has created an opportunity for successful people to explore other dimensions of their lives.

“When people are highly skilled at any craft, there’s an identity trap that waits in the wings. It’s called identify foreclosure," said Gervais, who has worked closely with Seattle Seahawks coach Pete Carroll and his team. “In reality, we are far more than what we do. We are multi-dimensional human beings that cannot be defined by just one role we inhabit."

Lions coach Matt Patricia sheepishly acknowledges he inhabits the team's headquarters in Allen Park, Michigan, longer than he would like, and spends some nights there during the season. For the past few months, though, Patricia's wife and kids have had unprecedented access to him.

"I don’t have a very good life balance. I’m trying to because I need to have a better life balance. Hopefully, we’ll try some things remotely and find out they work."