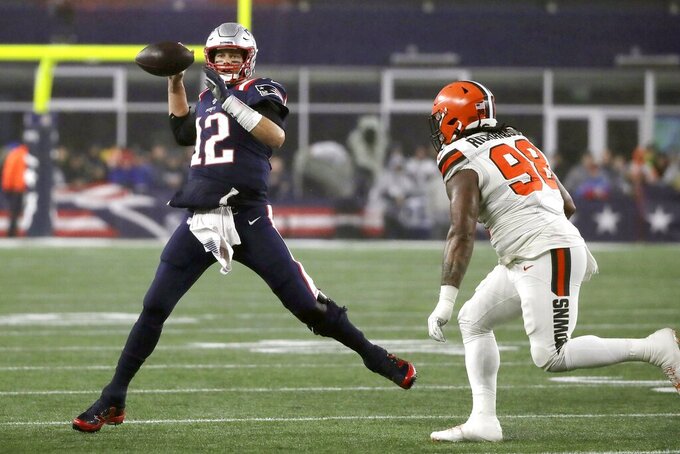 FOXBOROUGH, Mass. (AP) — After the Patriots dominated the New York Giants in a 35-14 victory two weeks ago, Tom Brady was asked whether he thought the offense had been good enough to that point.

Two wins later the Patriots are still unbeaten, off their first 8-0 start since 2015. But the question is still a valid one as New England prepares to head into a much tougher schedule in the second half of the season.

The offense has made strides over the past two games.

The offensive line has settled in after having to adjust because of injuries. And running back Sony Michel has rediscovered some of his rookie mojo.

The most welcomed developments, though, have been in the receiving group, which had one of its best performances of the season against Cleveland.

Brady completed passes to seven different receivers in Sunday's 27-13 win over the Browns. Julian Edelman had the most productive game with eight catches for 78 yards and two touchdowns.

But Brady also completed a fourth-quarter pass to Mohamed Sanu, acquired last week in a trade with Atlanta, and another to tight end Ben Watson, who was playing in his second game since re-signing with the team Oct. 15.

Both plays, a 19-yard pass to Sanu and a 26-yarder to Watson helped set up Mike Nugent's 29-yard field goal, which stretched New England's lead to three scores.

Coupled with another strong performance by Phillip Dorsett (three catches, 43 yards), who is seizing the role as the offense's deep threat, they are all signs that Brady has found trust in a core group of receivers.

"I think we're just going to try to find ways to keep incorporating everybody," Brady said.

That faith and Brady's willingness to spread the ball around couldn't come at a better time.

After playing just one team with a winning record in the first half of the season, five of the Patriots' final eight opponents currently sit above .500. Three of their remaining opponents — the Ravens, Cowboys and Chiefs currently lead their divisions.

Sanu said though he's just getting settled in with his new team, he already has a sense that this has a chance to be a special group by season's end.

The defense continues to have an uncanny ability to force turnovers in 2019.

It had two fumble recoveries — one returned for a touchdown by Dont'a Hightower— and an interception in Sunday's win. It has forced a league-high 25 turnovers on the season.

New England also has a plus-17 turnover differential, which is tied with the 1983 Minnesota Vikings for the fifth-highest turnover margin by a team through eight games since 1970.

As good as the defense played, it allowed four plays of more than 20 yards to Cleveland, including a 44-yard run by running back Nick Chubb. The play could have easily been a touchdown if not for the effort of Jonathan Jones, who didn't give up on the play and eventually tackled Chubb, forcing him to fumble.

But plays such as Jones' aren't something they can count on each week. So, look for limiting opponents' big plays to be a big point of emphasis going forward.

With right guard Shaq Mason out with an ankle injury, journeyman James Ferentz made his first career start in his place. Coach Bill Belichick said it was the latest solid performance by the reserves on the O-line who have gotten opportunities with multiple starters out injured.

"You've got to give those guys a lot of credit," Belichick said. "They work hard and they're tough. They keep fighting."

While the rainy and windy conditions played a role, the Patriots' kicking game suffered against the Browns. Nugent had a 29-yard attempt blocked and missed another wide left from 34 yards. Since signing with New England Oct. 3 after Stephen Gostkowski was placed on injured reserve, Nugent is just 5 of 8 on field-goal attempts and has a missed extra point.

The Patriots will try to remain unbeaten when they visit Baltimore on Sunday night. The Ravens are coming off a bye week and lead the AFC North.