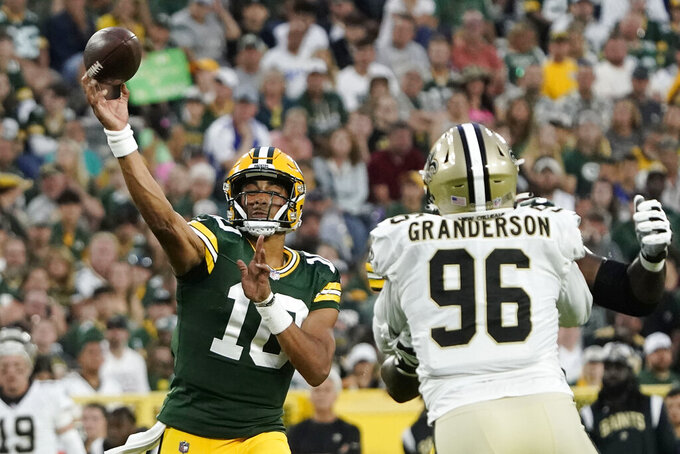 The first-round draft pick from Ohio State caught a 20-yard pass for his first touchdown of the preseason in the Saints’ 20-10 loss to the Green Bay Packers on Friday night. Olave also stood out in the Saints' joint practices with the Packers on Tuesday and Wednesday.

Olave wasn't the only rookie receiver to deliver a big play.

Green Bay's Romeo Doubs, a fourth-round pick from Nevada, caught a touchdown pass from Jordan Love for the second straight week. The Packers' other touchdown came on Danny Etling's 51-yard quarterback keeper in the fourth quarter.

“We've had a really good connection, I think, since he got here for OTAs,” Love said. “He's been a guy that's just been making plays out there.”

Olave, who set an Ohio State record with 35 touchdown catches, went to the Saints with the 11th overall pick in the draft. He scored his touchdown with 12 seconds left until halftime.

Saints quarterback Ian Book played the whole game and went 16 of 28 for 113 yards while also running for 49 yards on seven carries. The 2021 fourth-round pick from Notre Dame fumbled a snap and threw an interception on consecutive possessions in the second quarter.

New Orleans rested Andy Dalton, who threw a touchdown pass in his lone drive in the Saints’ preseason opener. Saints starting quarterback Jameis Winston is dealing with a foot injury.

“Andy got a ton of the reps this week in the practices,” Saints coach Dennis Allen said. “So there was a lot of guys that got a bunch of reps in the practices that we wanted to hold in tonight’s game. And so we got a good look at Ian. He played the whole game. There were some positives, and then obviously the negative really becomes the two turnovers.”

With MVP Aaron Rodgers sitting out each of Green Bay’s first two games, the Packers have gotten an extended look at Love. Packers coach Matt LaFleur said after Friday's game that no decision had been made yet on whether Rodgers will play in the preseason finale at Kansas City.

Love was 12 of 24 for 113 yards, including the 4-yard touchdown pass to Doubs. LaFleur believed Love was better than those numbers indicated and said about five passes were dropped.

“I've gotten more comfortable being decisive, being able to let it rip and not kind of waiting and being hesitant for a play to open up,” Love said. “It comes down to being comfortable with the offense and understanding where the receiver's going to be.”

The most notable stat for Love was his lack of turnovers. He went 13 of 24 for 176 yards with two touchdowns and three interceptions in a 28-21 loss to the San Francisco 49ers last week, though one interception went off tight end Tyler Davis' hands and another was stripped away from Doubs.

“I think he's light years ahead of where he was a year ago," LaFleur said. “I think if you asked our guys in that locker room, every one of them would tell you they've got a lot of confidence in him. I think we would all agree in that locker room that he's one of the most improved guys over the last year."

Green Bay's Tyler Goodson, an undrafted free agent from Iowa, had 10 carries for 42 yards and a 10-yard catch.

Packers WR Christian Watson participated in pregame warmups but was held out of the game. The second-round pick from North Dakota State underwent knee surgery after organized team activities and was activated from the physically unable to perform list Sunday.

Packers: At Kansas City on Thursday.