Packers' new formula: Rely on defense rather than offense 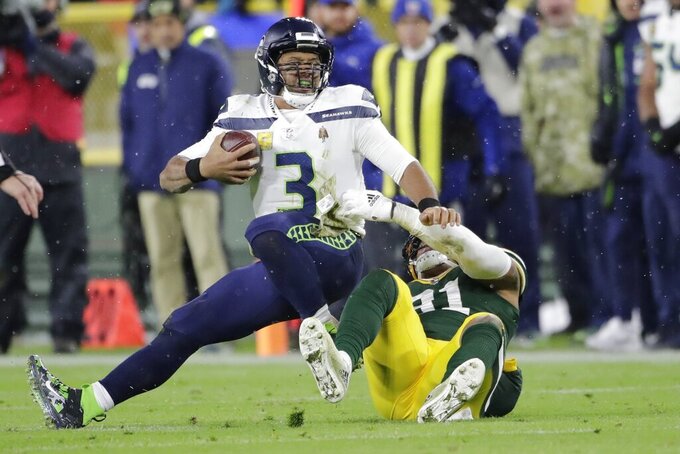 GREEN BAY, Wis. (AP) — The Green Bay Packers are relying on an unfamiliar approach to remain in their customary position atop the NFC North.

A franchise that has benefited from Hall of Fame-caliber quarterback play for most of the past three decades, first with Brett Favre and now with Aaron Rodgers, is getting more production from its defense than its offense.

“We’re making a statement,” linebacker Krys Barnes said Sunday after the Packers’ 17-0 victory over the Seattle Seahawks. “I think the defense is playing at an elite level.”

That’s continued even as the Packers have faced three of the league’s top quarterbacks in Arizona’s Kyler Murray, Kansas City’s Patrick Mahomes and Seattle’s Russell Wilson over the past three weeks. They won 24-21 at Arizona, lost 13-7 at Kansas City without Rodgers, and handed Seattle its first shutout loss since 2011.

The Packers have needed to play this championship-caliber defense because an offense that produced an NFL-leading 31.8 points per game a year ago isn’t approaching those heights this season.

That offense likely will be missing 2020 Pro Bowl running back Aaron Jones at least for the next game or two because of a mild sprain of his medial collateral ligament that caused him to leave the Seahawks game early.

“I don’t think it’s going to be long term, but we’ll just monitor it on a daily basis and see how fast he can heal up, because he’s certainly a guy you want out on the field,” coach Matt LaFleur said Monday.

Green Bay ranks 19th out of 32 teams in scoring with 21.6 points per game. The Packers had totaled seven points in a seven-quarter stretch before A.J. Dillon scored two fourth-quarter touchdowns Sunday.

That offense has been dealing with uncertainty at the quarterback position since Rodgers tested positive for COVID-19 on Nov. 3. Jordan Love made his first career start in place of Rodgers at Kansas City on Nov. 7. Rodgers was back Sunday, but wasn’t as sharp as usual after not practicing in the week leading up to the game.

There are other issues as well.

Green Bay is missing center Josh Myers and tight end Robert Tonyan because of knee issues, with Tonyan’s injury knocking him out for the entire season. David Bakhtiari still hasn’t played since tearing the anterior cruciate ligament in his left knee Dec. 31, though the 2020 All-Pro left tackle is getting closer to making his season debut.

“I do think that there’s a lot more out there for our offense, and I know we expect more out of the offense, there’s no question,” LaFleur said after Sunday’s game. “So, hopefully, we come back and we’re hungry and we attack it when we get back to practice on Wednesday.”

Green Bay has only one touchdown pass over its past two games — a 20-yarder from Love to Allen Lazard with less than five minutes left in the loss to the Chiefs. Of course, Rodgers didn't play in Kansas City.

Along with the Jones injury, Gary hurt his arm and OLB Whitney Mercilus hurt his biceps. LaFleur said Gary is still being evaluated. Without going into specifics, LaFleur didn’t sound hopeful about Mercilus’ situation.

The Packers get a chance to extend their 3½-game lead in the NFC North when they visit the second-place Minnesota Vikings on Sunday. Green Bay has a franchise-record seven consecutive victories in road division games.