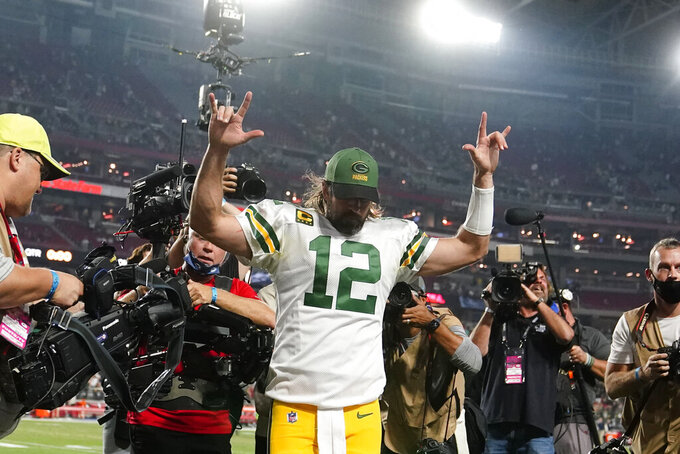 With Rodgers out at least Sunday against the Kansas City Chiefs, the Packers signed veteran Blake Bortles to the practice squad. Jordan Love, the 2020 first-round pick, will make his first NFL start. and Bortles will be added to the game-day roster to serve as the backup.

While the Packers are focused on extending their winning streak to eight games, the larger issue revolves around how the team and Rodgers handled the league’s COVID protocols. In a statement Wednesday, NFL spokesman Brian McCarthy said the league “is aware of the current situation in Green Bay and will be reviewing the Packers.”

“As far as the football space is concerned, I’m 100 percent confident,” LaFleur said before Thursday’s practice. “Meeting rooms, walk-through, everything we do in that area.”

What happens in the cafeteria, media auditorium and outside the building, however, are out of his control. If any potential violations are serious enough, the NFL could deliver harsh penalties. In late November of last season, for instance, the New Orleans Saints were fined $500,000 and forfeited a seventh-round draft pick.

Even with vaccines, COVID has been a bigger issue this season than last season for the Packers. Against Arizona last Thursday night, the Packers were without receivers Davante Adams and Allen Lazard and defensive coordinator Joe Barry.

All three are back with the team, with Adams and Barry returning on Thursday. Adams didn’t practice but LaFleur is hopeful he’ll be available for Sunday. Barry said he “sniffles” but no other symptoms.

While the receivers are back, the latest calamity is at quarterback. Not only is Rodgers on the COVID list but so is practice-squad prospect Kurt Benkert. With Love the last man standing on the depth chart, the team brought back Bortles, who signed on May 12 but was released just before the start of training camp after Rodgers decided to return following a tumultuous offseason. With some background in LaFleur’s offense, along with four years of experience alongside Packers offensive coordinator Nathaniel Hackett while they were in Jacksonville, Bortles was an easy choice as the emergency fill-in, LaFleur said.

“Blake’s got a great foundation with what have implemented,” LaFleur said. “He’s been in our building, he knows how to get us full operational, so he was by far the logical choice to bring back here.”

Notes: Green Bay promoted RB Patrick Taylor from the practice squad to take the place of injured rookie Kylin Hill (knee). … CB Kevin King, who has missed the last three games with a shoulder injury, was full participation for a second consecutive practice. … LB De’Vondre Campbell, who was signed in June, was named the NFC Defensive Player of the Month. He had 45 tackles, one interception and two forced fumbles as Green Bay went 5-0.