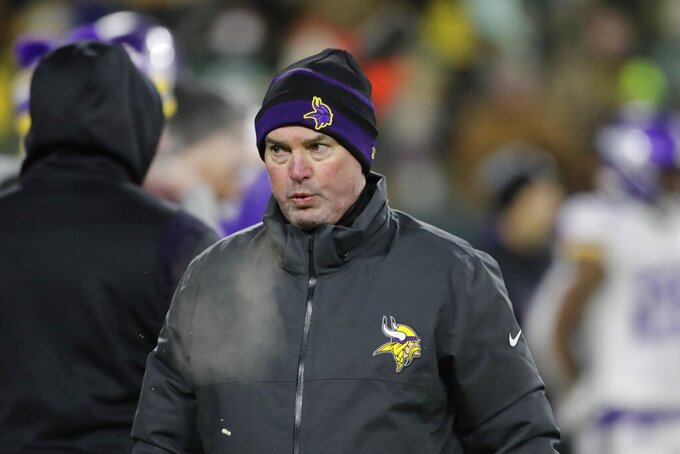 MINNEAPOLIS (AP) — If the Minnesota Vikings just played their last meaningful game under coach Mike Zimmer, the lopsided loss at Green Bay clarified the reasons why.

For all the strategic success Zimmer has had over the years with building and directing a defense, clever play-calling usually didn't make up for a shortage of reliable — let alone dominant — players for pass coverage and pass rush.

Whether due to draft misjudgment by the front office, a lagging ability by Zimmer and his staff to develop young players or a combination of both, the Vikings (7-9) were exposed again on defense by Aaron Rodgers and the Packers in a 37-10 defeat on Sunday night that eliminated Minnesota from playoff contention.

For the second straight year, the Vikings ultimately were done in by the defense that Zimmer molded into one of the NFL's best soon after his arrival in 2014 and helped maintain that billing for most of his eight-season tenure. Losing defensive ends Danielle Hunter and Everson Griffen in the middle of the season was a bad break, but the lack of depth was worse.

Then there's the offense, which is loaded with big salary-cap hits and high draft picks. But for all its potency, it has stumbled in some crucial games — including Sunday's loss.

Losing quarterback Kirk Cousins to the COVID-19 reserve list two days before the Green Bay game was tough, but even with career backup QB Sean Mannion at the helm and standout wide receiver Adam Thielen on injured reserve, the Vikings should have managed more than 206 total yards.

The Vikings called 43 pass plays, and the second-longest completion of the game was a 21-yarder to center Garrett Bradbury off a deflected ball.

And Zimmer openly criticized rookie offensive coordinator Klint Kubiak's game plan for not sticking the ground game, noting that the Vikings only called nine runs. Zimmer said Monday there wasn't a disconnect between the two coaches, but said he had urged Kubiak multiple times the night before to stick with Cook and didn't see that advice materialize.

One of those instances was when the Vikings took the ball for their fourth possession midway through the second quarter and trailing 6-0. Mannion was sacked for a 10-yard loss on a first down on the way to Minnesota's third of six three-and-outs.

“Sometimes he doesn’t hear me when he’s calling a play,” Zimmer said. “He can only hear what he’s saying. So there’s some things like that that go on throughout the course of a game.”

So Zimmer and his .559 regular-season winning percentage face the possibility of the end of his time in Minnesota — after a go-through-the-motions game against Chicago on Sunday.

Zimmer, who has two years remaining on his contract, said he hasn't spoken with Vikings management about his status.

“The media is the ones doing all the ‘uncertainty’ and everything else, so we don’t worry about that,” Zimmer said. "We just focus on what our job is."

The special teams improvements made this season are more evidence of Minnesota's underachievement.

Greg Joseph made a 51-yard field goal Sunday night, the longest in Lambeau Field history for a January game, and is 18 for 19 on field goals over the past 10 games. His only misses in the past five games were a 53-yard try and an extra point in the first quarter of the Dec. 9 win over Pittsburgh.

Jordan Berry also punted six times in the frigid air against for a gross average of 49.3 yards, with only one productive return (21 yards) by the Packers.

Releasing Bashaud Breeland last month further thinned the cornerback group. Cameron Dantzler was sidelined on Sunday night, putting Kris Boyd in the starting lineup for the first time this season. Zimmer didn't assign veteran Patrick Peterson to Davante Adams until the second half, after the Packers star had already his way with Boyd and Mackensie Alexander.

Tight end Tyler Conklin has a career-high 587 receiving yards. If he gets with 48 or more yards against the Bears, he'll have the most receiving yards in a season by a Vikings tight end since Kyle Rudolph in 2016. Conklin and Irv Smith Jr., whose knee injury in August kept him out for the season, ought to give the Vikings a solid young pair to use as a building block on offense for 2022.

Even with Zimmer seeking to save his job, proclaiming that Mannion was the sure bet and rookie QB Kellen Mond wasn't a consideration was not exactly an endorsement of the third-round draft pick and his trajectory.

The Vikings have had 10 losing streaks of at least two games in the past four seasons. They have not had a winning record since the end of the 2019 season and are 8-12 in their past 20 regular season games in December and January.

Dantzler (calf) and DT Michael Pierce (illness) may have a chance to return this week after sitting out Sunday.

The Vikings will try to avoid double-digit losses for the first time in eight seasons under Zimmer, who said he planned to play his starters against the Bears if they're healthy.