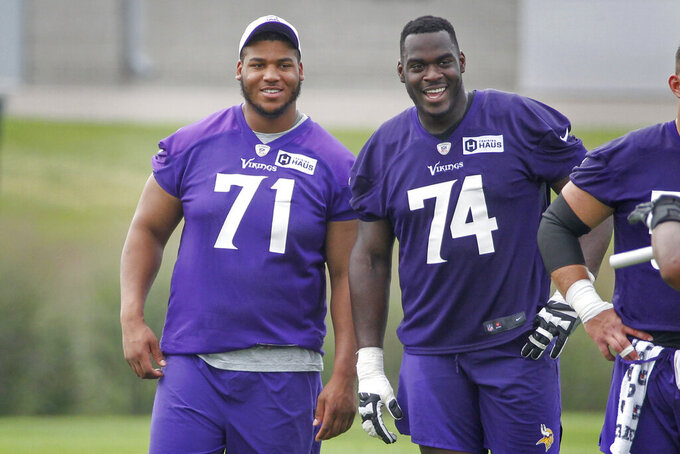 EAGAN, Minn. (AP) — Improving the offensive line has been a high priority for the Minnesota Vikings in recent drafts after years of neglect.

Christian Darrisaw is the latest attempt at procuring a building block for the group.

Two weeks into training camp, the likelihood of an immediate impact from their first-round pick is low because of an injury a frustrated coach Mike Zimmer described as “nagging all the time.”

Darrisaw has been brought along slowly, seven months removed from offseason core muscle surgery, and his conspicuous absence from full-team drills has predictably impeded his progress at the critical position of left tackle.

“He's one step forward and two steps back,” Zimmer said last week, referring to Darrisaw's recovery from the procedure that stemmed from the trouble he had with his groin last year at Virginia Tech. "Hard to get it done when you’re not out there doing stuff.’’

The Vikings re-signed veteran Rashod Hill as insurance, and it appears the team will need to pay the deductible on that to start the season.

Hill, entering his sixth year, has taken most of the turns at left tackle with the first team. He is as trustworthy as players come but better suited to a backup role for both tackle spots. When the Vikings selected Darrisaw 23rd overall, they were planning on him sliding in for Riley Reiff after the release of their steadiest blocker for much-needed salary cap savings.

“It’s definitely tough because you want to be here. You want to be available for the team. But right now I’m dealing with this little injury, and I know I’ll be better. Once I’m out there, I’m going to be out there,” Darrisaw said.

That day has not yet arrived. He practiced in full pads but remained a limited participant Monday, mostly a spectator when the starters run plays against the defense.

“He's done a really good job indoctrinating himself in the meeting room with our guys, and I think the guys enjoy having him in there. He asks great questions, and we’re just excited whenever he gets out there to work with him,” said new offensive line coach Phil Rauscher, who was promoted when Rick Dennison was reassigned to a consultant role so he could remain with the team without being vaccinated.

Darrisaw, a late-blooming, long-armed athletic blocker at 6-foot-5 and 322 pounds, was a second team All-American in 2020. He checked a box for the Vikings by adding size to a group that has been plenty mobile but sometimes outmanned by bigger defensive lines.

That was the same goal in mind when they took Ohio State's Wyatt Davis in the third round, but after being hindered by an undisclosed injury at the beginning of training camp he has also fallen behind Oli Udoh and Dakota Dozier in the mix at right guard. Udoh was a sixth-round draft pick in 2019 who practiced at tackle his first two years.

With Brian O'Neill at right tackle, Garrett Bradbury at center and Ezra Cleveland at left guard, every other spot on the offensive line is manned by a Vikings draft pick from 2018 or later.

“The plan is always when they get here, they’re going in, but sometimes they’re not quite ready,” Zimmer said. “Offensive line coming from college to the NFL is a big jump.”

The Vikings had a scare on Friday when star wide receiver Justin Jefferson landed hard on his left shoulder while trying to make a catch in practice, but Zimmer said on Monday that Jefferson would be back “pretty quick.” Jefferson was on the field watching the workout, without pads.