Prolific TE Kittle takes as much in blocking as receiving 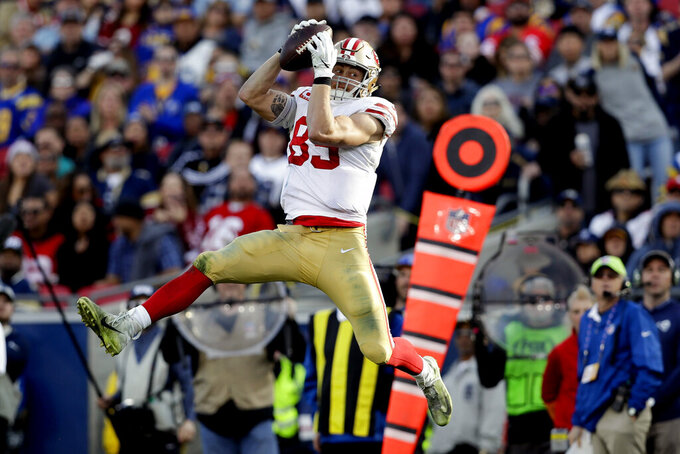 FILE - In this Dec. 30, 2018, file photo, San Francisco 49ers tight end George Kittle catches a pass against the Los Angeles Rams during the first half in an NFL football game in Los Angeles. No tight end has ever been as prolific with the ball in his hands as Kittle was for the 49ers last season when he used his speed and ability to run after the catch to record the most yards receiving ever in a season for a tight end. (AP Photo/Marcio Jose Sanchez, File)

SANTA CLARA, Calif. (AP) — No tight end has ever been as prolific with the ball in his hands as George Kittle was for the San Francisco 49ers last season when he used his speed and ability to run after the catch to record the most yards receiving ever in a season for a tight end.

But for Kittle, who lasted until the fifth round in the 2017 draft after being mostly as a blocker at college in Iowa, it's what he does on the plays where the ball doesn't come his way that are most gratifying.

"I think I've said it a bunch of times, there's nothing better than to move a man from point A to point B against his will," he said. "And so when you do that, and you can do it multiple times, it's a blast. So there are things that I don't think I'll ever let go away from me. The run game is something I take a lot of pride, because it's a way to separate yourself from other people."

Kittle separates himself both as a blocker and receiver. He also had 88 catches for 1,377 yards and five TDs as a receiver, breaking the single-season record for receiving yards by a tight end that Kansas City's Travis Kelce had eclipsed earlier on the final day of last season. Rob Gronkowski had held the record of 1,327 yards in 2011 before being passed by Kelce and Kittle.

Kittle also graded out as one of the best blockers at the position and was a key part on San Francisco's running game, although his coach doesn't quite believe his star player enjoys that aspect the best.

Kittle is a perfect fit in Shanahan's offense, where receivers often get schemed open in space where they can make plays after the catch. Kittle gained 870 of his yards after the catch, the most in the NFL since SportRadar began tracking that stat in 2010, even eclipsing running backs who make many of their receptions closer to the line of scrimmage.

Kittle showed little of those skills in college when he was used mostly as a blocker. He caught just 48 passes for 737 yards in 25 games at Iowa, leading to questions about whether he could be a dual-threat tight end in the pros and contributing to his lasting until the fifth round of the draft.

But he showed flashes as a rookie with 43 catches for 515 yards and then burst into stardom last season, despite playing the second half of the season with fractured rib cartilage.

Kittle turned that success on the field to opportunities off it, whether it was going to wrestling events, taking part in a promotional tour to Canada or filming commercials.

"I'm just a happy guy," he said. "I'm 25 years old and I'm doing what I dreamed of doing when I was a kid. It's hard for me ever to be upset. Losing is not fun but the fact that I get to play football and that's my job makes it easy for me to get out of bed every day."

But Kittle knows the off-field opportunities are secondary to what he does on the field.

His teammates have no fear that success will go to Kittle's head. He remains one of the hardest workers and his love of doing the little things like sealing the edge as a blocker or drawing coverage that creates open space for other receivers make him one of the more popular players on the team.

"You see his mindset," receiver Marquise Goodwin said. "He's just an all-around great dude. That's why he ate like that. He's not worried about getting the ball. He's worried about getting open and being productive for the team. He has the right mindset. That's why he's blessed with that opportunity. I can't say enough good things about him. I can't wait to see what he can do for this team."

NOTES: The Niners named Nick Mullens as their backup QB behind Jimmy Garoppolo, with C.J. Beathard serving as third string. ... Rookie DE Nick Bosa returned to practice from an ankle injury and is hopeful to play the season opener Sunday at Tampa Bay. ... The Niners signed OL Ryan Pope to the practice squad.