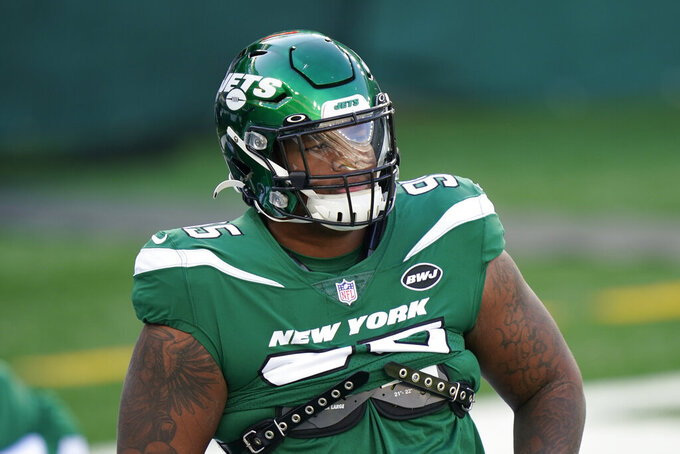 FILE - In this Nov. 29, 2020, file photo, New York Jets' Quinnen Williams warms up before an NFL football game against the Miami Dolphins in East Rutherford, N.J. Williams was back on the field and smiling, his wait finally over. The defensive lineman was activated from the physically unable to perform list Monday, Aug. 16, 2021, after offseason surgery on a broken foot sidelined him the last few months. (AP Photo/Corey Sipkin, File)

FLORHAM PARK, N.J. (AP) — Quinnen Williams was back on the field and smiling, his wait finally over.

The New York Jets defensive lineman was activated from the physically unable to perform list Monday after offseason surgery on a broken foot sidelined him the past few months.

“Man, I was just excited,” Williams said. “We've got a great group of guys on the whole entire team and a great coaching staff and I was just ready to be a part of that. I’m ready to be in the mix with that because I didn't get a chance to do OTAs and summer workouts and different things like that with the team.

"So now I've got the opportunity to be around them and of course, I’m excited and ready to roll.”

Williams worked in individual drills, but not team periods as he builds up his conditioning. Coach Robert Saleh said the defensive lineman is not expected to play in the preseason game Saturday night at Green Bay.

Williams had surgery in May but was in meetings with the team through the first few weeks of training camp despite not practicing. He spent the past several days working with trainers, working up to being activated from PUP.

“It was a big thing for me to just stay focused on that and just sort of sharpen my axe every day,” he said, "so when it came to this week and going on the field this week, I could be explosive still and I could be the player that I am.”

Williams is expected to be a key part of Saleh's defensive line, which is considered the strength of the team this season. The Jets signed Carl Lawson and Sheldon Rankins in free agency, both of whom are having good camps, and they join a group that includes Williams, John Franklin-Myers, Foley Fatukasi, Nathan Shepherd, Ronald Blair and Bryce Huff, among others.

One of the unique aspects of the D-line group is that each player has a different skillset that complements the others. That's something that excites Williams — that they all can help each other's games rise to the next level.

“We’ll be able to feed off each other, make everybody better,” Williams said. “When you've got a family full of sharks, man, you're all going to eat. So that’s how I look at it.”

Williams led the Jets last season with seven sacks despite missing three games, including the last two with a neck injury and concussion. Saleh liked Williams coming out of the draft in 2019, when he was the No. 3 overall pick by New York. The defense Saleh ran at the time in San Francisco would have made for a solid fit for Williams. A few years later, Saleh gets to use him with the defense he and coordinator Jeff Ulbrich are running with the Jets.

“The man is just pure mass, right?” Saleh said of the 6-foot-3, 303-pound lineman. “I mean you look at him, he’s enormous. And to get all that mass moving forward without having to read anything on the fly and just absolutely attack up front, it’s hard to stop that mass from moving, especially with how strong he is, how smart he is, how violent he is and how explosive he is.”

Williams has also raved about Saleh, saying he has been a fan of his for a few years. He studied 49ers tape during his first two seasons, so when the Jets hired Saleh as their coach in March, Williams couldn't help but think how beneficial it would be for him personally.

“It was an amazing, amazing upgrade for me and my career,” Williams said.

One adjustment Williams needed to make to fully fit in the scheme was to change his stance on the line. Defensive line coach Aaron Whitecotton and assistant D-line coach Nate Ollie both worked with Williams this offseason to tweak things, allowing him to fly off the line faster.

“It helped me unleash some explosive traits that I have," Williams said.

And that could mean big trouble for opposing quarterbacks, running backs and offensive coordinators.

NOTES: The Jets waived K Chris Naggar, who made one of two field-goal attempts in the preseason opener against the Giants. Matt Ammendola, signed on July 30, is the lone kicker currently on New York's roster. ... RB Tevin Coleman practiced after missing the game Saturday night for what Saleh said was “personal reasons.” ... TE Ryan Griffin left practice to be evaluated for a hamstring injury. ... Rookie WR Elijah Moore, dealing with a quadriceps injury, will not practice this week or play in Green Bay. Saleh doesn't think Moore's availability for the season opener is in jeopardy.