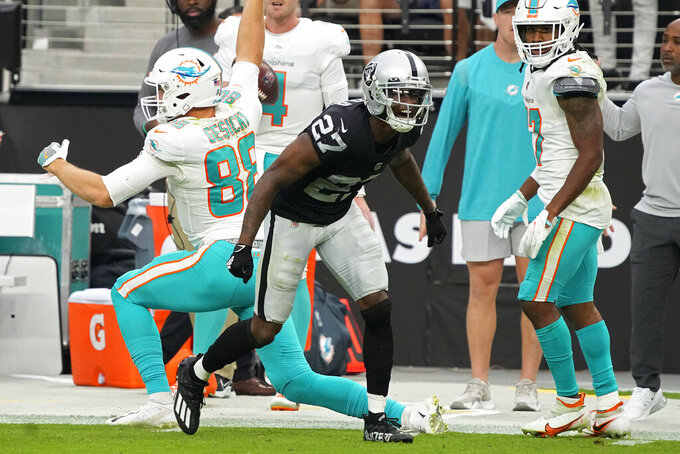 The Las Vegas Raiders placed two of their top cornerbacks on injured reserve Saturday with starter Trayvon Mullen and backup Damon Arnette both shut down for at least three weeks.

The Raiders also placed backup tight end Derek Carrier on injured reserve. All three players got hurt in Monday night's loss to the Los Angeles Chargers. Mullen went down with a foot injury, Arnette with an injured groin and Carrier with a pectoral injury.

They all must miss at least three games and won't be eligible to return until Nov. 7 against the New York Giants.

The Raiders are getting two injured players back for this week's game against the Chicago Bears with cornerback Keisean Nixon and running back Jalen Richard both getting activated from injured reserve.

The most impactful injury is to Mullen, who has been solid in coverage this season across from veteran Casey Hayward. His injury will likely open up an opportunity for second-year pro Amik Robertson to start.

Nixon has played 29 games with one start the past two seasons with the Raiders, while Facyson played 44 games with four starts with the Chargers the previous three years under current Raiders defensive coordinator Gus Bradley.

Richard provided the Raiders with a third-down back. He has 179 career receptions and is a good blocker in pass situations.