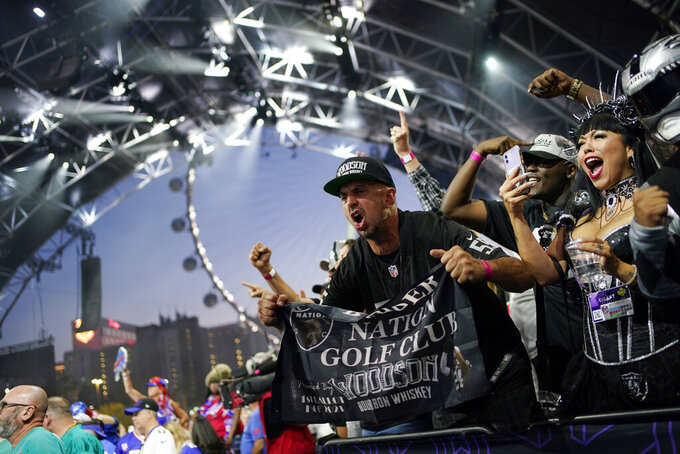 LAS VEGAS (AP) — Dylan Parham almost missed the biggest moment of his football career Friday night, after the Raiders called to tell him to pack his bags for Las Vegas.

Emotions got the best of Parham as the Raiders chose the 6-foot-3, 310-pound guard from Memphis in the third round of the NFL draft with the 90th overall pick.

“I was literally trying to fix my face from crying as much as I was,” said Parham, a four-year starter for the Tigers at three different positions. “I was trying to get myself back together, it was an unreal moment talking to the organization and then tuning back into the TV to watch it live."

By selecting Parham, who has played on both the left and right sides of the offensive line and spent some time at center, the Raiders hope they’ve found someone to strengthen one of their weakest units.

Originally recruited for college as a blocking tight end, Parham moved to the offensive line in the spring of 2018, and starred at left guard for two seasons. He earned first-team All-American Athletic Conference honors in 2021 for his work at right guard.

“I’m most definitely confident in my ability, I’m ready to go out there and showcase that, just being able to showcase my versatility,” said Parham, who was named to The Associated Press 2020 All-Bowl Team. “I feel like that’s one of the things that they really enjoyed about my playstyle, just me having multiple looks at different positions.”

Raiders first-year general manager Dave Ziegler said Parham’s versatility was certainly part of the allure and value of bringing in someone who can play two positions. Ziegler said the coaching staff will allow Parham to do what he’s capable of without setting boundaries, giving him opportunities at both guard and center.

“He’s gonna have to come in here and earn it — he’s a rookie," Ziegler said. "There’s a lot of transitions that are gonna take place. It’s gonna be up to him how he improves the roster.”

The one area of concern with Parham is his aptness for false-start penalties, a trait the Raiders experienced with last year's first-round pick Alex Leatherwood during his rookie campaign.

Las Vegas brought back tackle Brandon Parker and Jermaine Eluemunor, and return most of the offensive line that struggled in 2021. Leatherwood will be expected to make huge strides in his second season.

“For all our offensive linemen, they all get cross-trained across the board,” Ziegler added. “The interior guys all work at guard and center so he’ll be no different than the other guys on our team. We’ll give all these guys opportunities to work at both spots.”

Parham, who ran a 4.93 in his 40-yard dash at the NFL combine, said he and the Raiders initiated conversations at the combine.

“That was definitely the starting point,” Ziegler said. “We had already watched the film and things like that throughout the fall, so we had interest from what he had put on tape. The combine was a peek under the curtain a little bit just to get to know him as a person. It was a good first impression."

The Raiders were originally slotted to choose 86th overall but traded their pick to Tennessee for the 90th and 169th picks.

“It gives us more flexibility as we go throughout the draft,” Ziegler said on the decision to slide down four spots and add an additional pick. “It can give you some more swings, in terms of more players, and just gives you more collateral to move up and down the board."

Hoping to find players in the middle rounds of the NFL draft to help develop into core contributors, the Raiders have additional picks in the fourth round, three in the fifth, and one in the seventh.

The Raiders didn’t make a pick in the first round for the first time since 2012.

Under a new regime, with Ziegler and new coach Josh McDaniels, the Raiders chose an aggressive route via the trade and free agency, including the decision to trade their first- and second-round picks to Green Bay for All-Pro receiver Davante Adams.