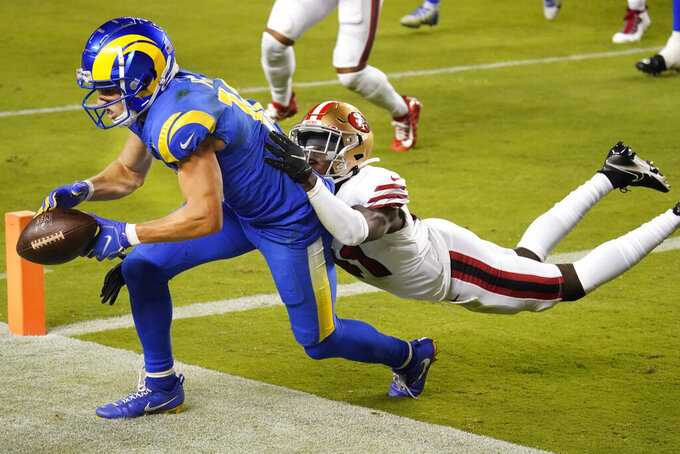 If they want to truly be a contender they will need to raise their game so they can compete with the tougher competition they will see the rest of the way.

The Rams fell short in that regard on Sunday night as Jared Goff and the offense struggled to get into any kind of rhythm and missed tackles doomed the defense in a 24-16 loss to the NFC West rival San Francisco 49ers.

The Rams (4-2) are off to a solid start this season but questions remain about how good they truly are considering their only wins came against Dallas, Philadelphia, Washington and the Giants, who are a collective 2-14-1 when playing outside the division.

The Rams, on the other hand, have lost both times they have played outside the NFC East, falling 35-32 at Buffalo in Week 3 and then again to the Niners.

The problems Sunday materialized right from the start as San Francisco scored a TD on the opening drive by gaining 69 yards on four passes behind the line, including a 35-yarder to Deebo Samuel when several defenders stopped early on the play when they thought it was over.

“They came up with momentum right away. That’s on us,” Donald said. “We pretty much beat ourselves and put ourselves in bad situations throughout the game. Any team you play in this league, you do that, you’re not going to win.”

The problems with tackling persisted all night with the final straw being Samuel’s 11-yard gain when he bowled over defenders on third-and-7 to run out the clock.

The offense had its own issues with Goff unable to get into a groove, going 19 for 38 for 198 yards, two TDs and one interception.

He especially had issues getting the ball to his top two wideouts Cooper Kupp and Robert Woods. Goff missed an open Kupp on a deep pass and Kupp dropped another in the end zone. Goff was 7 for 19 for 40 yards targeting those two players.

“Clearly wasn’t my best,” Goff said. “Just some uncharacteristic stuff. Something that I’ve never done in my life, and don’t expect to ever repeat. Just got to be a little bit better there, being a little more accurate. That’s probably what I do best is accuracy, and it probably would have put us in a little better situation there, give us a better chance to win.”

The Rams failed to capitalized on two key drives in the second half that ended up proving costly. They settled for a field goal on the opening drive of the third quarter when Andrew Whitworth was called for a false start in the red zone on third-and-1.

Then they drove down to the 1 later in the third before Darrell Henderson was hit for a 1-yard loss on second down, Kupp dropped a pass in the end zone on third down and then Goff was intercepted by Jason Verrett on fourth down.

Goff managed to connect on a 40-yard TD pass to Josh Reynolds with 3:24 left but the Rams couldn’t get the ball back and lost.

“For some reason, sometimes you’re just off,” Whitworth said. “Today was one of those days we were off a little bit. ... Too many missed opportunities really just all day long to me. It’s one of those things where you know you hurt yourself the entire day, and I think that’s the part that’s most frustrating.”