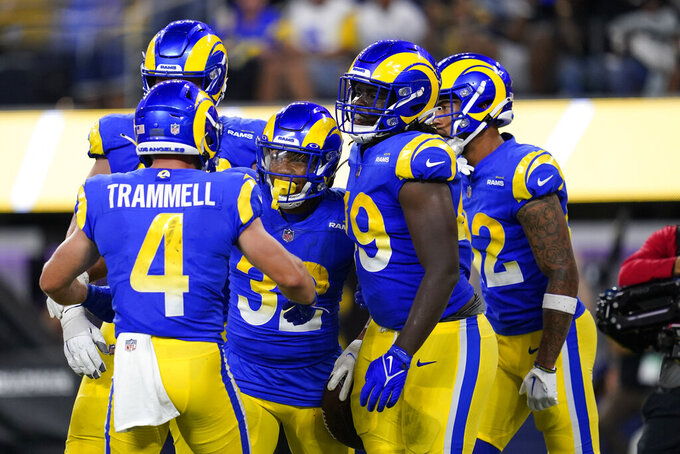 Los Angeles Rams running back Trey Ragas (32) celebrates his rushing touchdown with teammates during the second half of a preseason NFL football game against the Houston Texans Friday, Aug. 19, 2022, in Inglewood, Calif. (AP Photo/Ashley Landis) 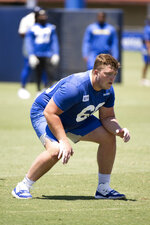 The Rams on Saturday also waived tight end Kendall Blanton, a Super Bowl starter who made several big postseason receptions during their run to a championship.

“It's a real shame for a kid that's worked really hard and puts a lot into this game,” McVay said. “We obviously drafted him with confidence that he could be a guy that could potentially contribute for us this year.”

The third-round selection out of Wisconsin was the Rams' highest draft choice last spring, but Bruss was likely to play a backup role this season. He began training camp in competition for the starting spot at right guard vacated by Austin Corbett's free-agent departure for Carolina, but veteran Coleman Shelton had essentially secured the job even before Bruss' injury.

“I'm really pleased with the ascension of Coleman Shelton, showing what kind of player he really is, where he can really play any of those three interior spots,” McVay said. “He's played really well at the right guard spot.”

McVay also said rookie linebacker Daniel Hardy has a high ankle sprain that will force him to start the season on injured reserve. Hardy was a seventh-round selection out of Montana State.

The Rams trimmed their roster on Saturday, three days ahead of the NFL deadline to reach the 80-player limit. Along with Blanton, the Rams waived running backs Raymond Calais and AJ Rose, defensive back Jairon McVea and receiver JJ Koski.

Blanton's departure was a mild surprise even though he had just four career receptions for the Rams, who signed him as an undrafted free agent in 2019. He stepped up in the postseason, catching a 7-yard TD pass in Los Angeles' road win over Tampa Bay before making five catches for 57 yards in the NFC title game against San Francisco.

Blanton then started the Super Bowl with first-stringer Tyler Higbee sidelined by an injury, but he didn't make a catch in the Rams' 23-20 victory.

Blanton's early departure could give him more time to find a new team in time to suit up for the third preseason game, McVay said. The Rams already have Higbee and Brycen Hopkins at tight end, while Jacob Harris can still play the position even though he has moved to receiver.

McVay rejected the idea that Blanton was cut because the Rams intend to keep eight receivers based on several players' versatility and the emergence of undrafted rookie receiver Lance McCutcheon, who has 10 catches for 183 yards and two TDs in two preseason games.

“I love Kendall and I'm very appreciative of the time we had together, but it was based on the evaluation of what we've seen,” McVay said. “It was a football decision as it relates to the tight ends. Didn't have anything to do with the wide receivers or any other spot.”

Calais was waived one day after he rushed four times for 14 yards behind the Rams' second-string offensive line against the Texans. Calais returned kickoffs as a rookie in 2020, but he missed last season with an injury and never got a regular-season carry for the Rams despite impressive athleticism and speed.