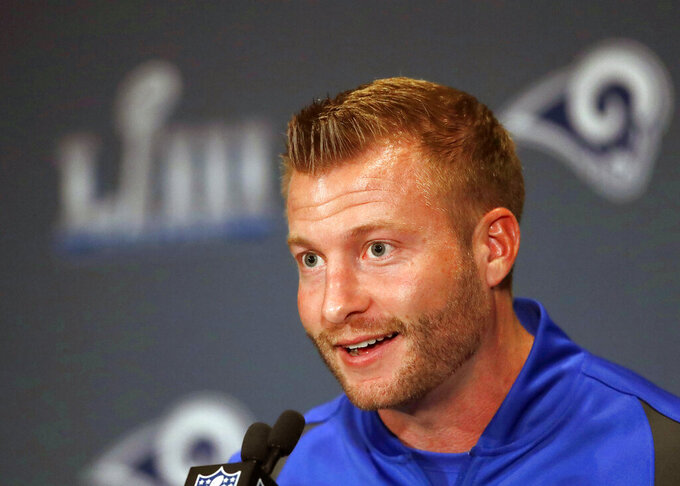 IRVINE, Calif. (AP) — Most of the Los Angeles Rams had never been to the Super Bowl before last February, so they relished every day of the experience in Atlanta.

And over the ensuing five months, the Rams have experienced another first: Being constantly asked how they managed to lose like that on football's biggest stage.

"Yeah, there was a lot of talk this summer," cornerback Nickell Robey-Coleman said. "It was the last game of the season, so it's natural. It's just more motivation. It just actually lets you know how big that game is, and how important it is for people to win."

The Rams reported to training camp this weekend with that 13-3 loss to New England still sharp in many minds. In particular, the high-powered Los Angeles offense's largely inept performance still seems baffling in retrospect, both to the fans who watched it and to the players and coaches who lived through it.

When Sean McVay appeared on Jimmy Kimmel's ABC talk show earlier this month, the host asked how often the coach still thought about his offense's three-point, 260-yard effort in the lowest-scoring Super Bowl.

"Every minute," McVay said with a rueful smile.

McVay had never coached in a Super Bowl, but he already knows how to use that experience to motivate a team returning with nearly all of the players who came up short in Atlanta.

While he shares most coaches' earnest focus on the future, McVay knows he can draw motivational fuel from the disappointment and embarrassment of the NFC champions' thumping from the Patriots.

"It is certainly something we talk about," McVay said Saturday. "(But) you wipe the slate clean every year. There are 31 other teams that have the same goals as us, but like last year, the only way you achieve goals in this league is you produce in the present, and you just control what you can control."

The Rams went back to work at UC Irvine this weekend intending to turn their experience into more success. They've won 26 total games and two NFC West titles in McVay's two seasons, but that Super Bowl loss serves as a reminder not to lean on past achievements.

McVay didn't tear up his inventive offensive schemes after Bill Belichick countered them so comprehensively in the Super Bowl, and Los Angeles didn't shake up its roster.

Instead, nine of the Rams' 11 offensive starters are returning along with the potentially enormous addition of receiver Cooper Kupp, who missed the second half of last season and the playoffs with a torn knee ligament.

Kupp broke out with 62 catches for 869 yards as a rookie in 2017, and he was midway through another outstanding season when he went down. He has been the receiver on some of the biggest throws ever made by quarterback Jared Goff, whose 19-for-38 performance in the Super Bowl quieted none of his critics.

Goff appears to be growing nicely from the setback, although the results won't be clear until the regular season begins in September. He said he feels more mature heading into his fourth training camp, and the Rams hope it shows on the field as they prepare to sign him to a massive contract extension in the near future.

"I think (the opening practice of camp) was the first time that truly felt like we picked up where we left off," Goff said, noting that McVay was new two years ago, while top receiver Brandin Cooks was new last season.

"The third year, this is it, is where everyone is coming back collectively as a unit," Goff added. "It felt like there was no fall-off at all. We know exactly what we we're doing, and it felt really good. ... I think this year is truly the first year where it didn't feel so big. You're so used to it at this point."

The Rams' two biggest offseason additions were Eric Weddle and Clay Matthews, two veteran defensive NFL stars return to their native Los Angeles area to chase a championship. They also added a crop of rookies — most notably Greg Gaines, the current replacement for starting nose tackle Ndamukong Suh — but otherwise will rely on the roster that was so close, but yet so far from a title.

The upcoming season will prove whether one major loss shook the confidence of a team that has been among the NFL's best teams for the past two seasons. The Rams believe they can shake it off.

"I think you have to realize," Goff said, "that you didn't win the division two years in a row on accident."