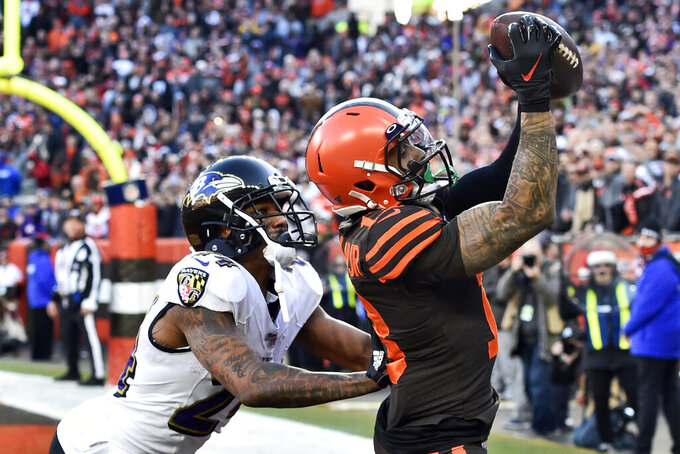 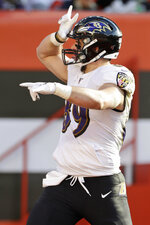 Jackson threw three touchdown passes — two to tight end Mark Andrews late in the first half — and rushed for 103 yards as the Ravens clinched the top seed in the AFC playoffs for the first time with their 11th straight win, 31-15 over the Cleveland Browns on Sunday to lock up home-field advantage throughout the playoffs.

“It feels good," Ravens coach John Harbaugh said. "The players deserve a tremendous amount of credit for it. It's hard to win any game in the NFL. When you put together this kind of season, it's quite an accomplishment.”

But Baltimore looks nothing like the team it was three months ago as the marvelous, multi-dimensional Jackson has taken the league by storm with his arm and legs. Jackson finished with 238 yards passing and went over 100 yards for the fifth time this season.

Harbaugh laughed when asked about Jackson's eye-popping stats. He has 36 TD passes and just six interceptions.

"What more do you need to say," Harbaugh said. “It's amazing. That's not bad for a running back.”

The Ravens did suffer an injury that could hurt their playoff hopes as running back Mark Ingram went down without being touched in the fourth quarter. Ingram immediately grabbed his lower left leg and collapsed when he tried to stand.

Ingram, who went over 1,000 yards rushing in the second quarter and caught a 12-yard TD pass from Jackson in the third, was able to walk to the sideline to be evaluated before limping to the locker room.

The Browns (6-9) were officially eliminated from the postseason, and now first-year coach Freddie Kitchens may be down to his last game. Kitchens has appeared overwhelmed at times and the home finale was a microcosm of this disappointing season as the Browns underperformed and will miss the playoffs for the 17th straight season.

Baker Mayfield threw a 3-yard TD pass in the fourth quarter to Odell Beckham Jr., whose acquisition by the Browns in March sent expectations soaring.

In the closing minutes, Beckham flung his helmet on the sideline in frustration and exchanged words with Kitchens.

Mayfield, who finished 20 of 33 for 192 yards with two TDs and a pick, said it's not all Kitchens' fault that Cleveland's season soured.

“Any time you have a head coach and you have a losing record, that's the first person everybody points to,” he said. “But it goes to many more things than just Freddie. We can all be better in this process and I think that's what it comes down to, there's no one single thing to blame. It's just overall, we all have to bring it more and more every day to meet the expectations we set for ourselves.”

Outplayed and in their own way for most of the first half, the Ravens scored two touchdowns in the final two minutes to take a 14-6 lead at the break.

Jackson connected on a 39-yard TD pass to Andrews with 1:18 for Baltimore's first score, and then hooked up with his tight end again on a sensational play the electrifying QB can add to his MVP candidacy.

Jackson stayed alive in the pocket long enough to buy time and fired an off-balance pass to the back of the end zone, where Andrews made a terrific leaping catch.

Baltimore had been unable to do anything on its first four possessions and the Browns appeared on their way to a surprising halftime lead. However, Kitchens made another head-scratching play call on third-and-1 when he had Mayfield pitch the ball to Kareem Hunt, who looked like he was going to throw it before being brought down for an 8-yard loss.

“We had opportunities to make plays and we just didn't do it,” said Kitchens, adding he was prepared to go for it on fourth down if Hunt had just thrown an incompletion.

The Ravens hurt themselves with some uncharacteristic mistakes to set up Cleveland's first touchdown after Jackson's fumble near mid-field.

Baltimore's defense committed two penalties on fourth down to extend the Browns' drive and cornerback Jimmy Smith was called for pass interference in the end zone, giving Cleveland first-and-goal at the 1.

On the next play, Mayfield rolled to his right and hit tight end Demetrius Harris.

Browns: RB Dontrell Hilliard suffered a left knee injury on a hard hit in the first half and did not return. Hilliard caught a short pass and was hit by Ravens CB Marcus Peters, who was also shaken up but stayed in. Hilliard left the stadium on crutches and his leg immobilized.

Jackson set the team record for TD passes with his first strike to Andrews, who leads all tight ends with 10 scores. Jackson's 34th TD pass broke the previous record he shared with Vinny Testaverde, who threw 33 in 1996, the Ravens' first season in Baltimore after leaving Cleveland. ... Harbaugh improved to 20-4 against Cleveland. ... The Ravens finished with 243 yards rushing and are on pace to be the first team in league history to average 200 rushing and passing yards.