Redskins at 1-8 lack direction and visible plan for future 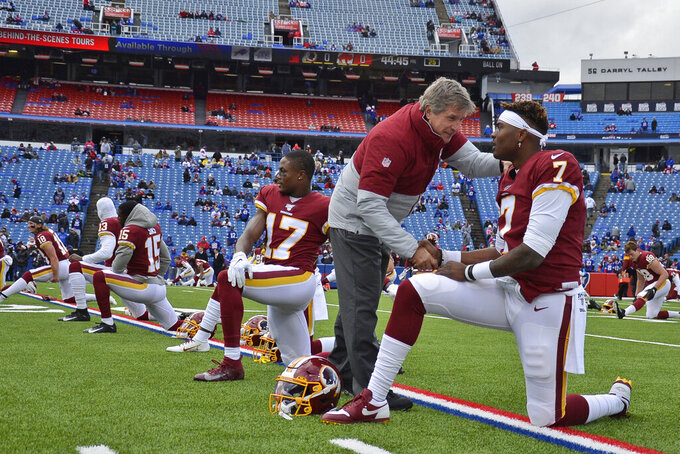 FILE - In this Nov. 3, 2019, file photo, Washington Redskins head coach Bill Callahan, left, talks with quarterback Dwayne Haskins before an NFL football game in Orchard Park, N.Y. The Redskins at the bye week of a lost season are a team without a definitive answer at quarterback, answers to questions on offense and defense and a visible organizational plan for the future. Callahan has repeatedly set the expectation at winning the next game and said he’s receiving no direction from the front office on how to develop young players for the next few years. (AP Photo/Adrian Kraus, File)

ASHBURN, Va. (AP) — Since the Washington Redskins fired Jay Gruden at 0-5 and replaced him with Bill Callahan, they have one win and three more losses to show for the coaching change.

Five consecutive losses to open the season already quashed Washington's playoff hopes, but there's little tangible evidence the move is paying off in the short or long term. The Redskins at the bye week of a lost season are a team without a definitive answer at quarterback, solutions to problems on offense and defense, or a visible organizational plan for the future.

Callahan has repeatedly set the expectation at winning the next game and said he's receiving no direction from the front office on how to develop young players for the next few years. On Monday, he refused to name Dwayne Haskins the starting QB moving forward after the 15th overall pick turned in an efficient if not spectacular first NFL start.

Reports emerged Wednesday that team brass told Haskins he's now the starter, which finally puts the Redskins on a similar path with other teams at the bottom of the standings. The 1-7 New York Jets are playing their second season with first-round pick Sam Darnold and first under coach Adam Gase; the 2-6 division rival New York Giants got the Daniel Jones era under way in Week 3; the 0-8 Cincinnati Bengals last week named fourth-rounder Ryan Finley their starter; and the 1-7 Miami Dolphins — the only team Washington has beaten — are in well-documented tank mode.

The 1-8 Redskins didn't trade anyone at the deadline and haven't yet pressed into a full youth movement. And as long as they're being measured for wins and not growth, there are going to be plenty more unmet expectations over the coming weeks. Washington might be favored just twice in its final seven games.

"The frustration is that we're just not winning," rookie cornerback Jimmy Moreland said after the most recent loss Sunday at Buffalo. "That's the frustration right there as a whole. We put a lot in week in and week out. Coming out with a result like this is hard every week."

At the very least, owner Dan Snyder and president Bruce Allen pulled the plug on Gruden and set the clock ticking toward a ninth different coach in 20 years. Callahan, who worked under Allen in Oakland, looks like a stopgap there but could be among those considered along with offensive coordinator Kevin O'Connell and some high-profile external candidates.

The logical next step is handing Haskins the keys to O'Connell's offense to take it for a test drive in case O'Connell is the next coach and to see if the Redskins pull an Arizona Cardinals and take a quarterback in the first round in back-to-back years. Snyder's support for Haskins makes moving on from him unlikely.

Callahan has previously called Case Keenum his starter when healthy, and a concussion to the veteran is the only reason Haskins started against the Bills. Despite four interceptions in two relief appearances earlier in his rookie year, Haskins looks capable of learning some on-field lessons without any concern he'll be marred by struggles.

Haskins grew more confident as the Bills game went on, finished 15 of 22 for 144 yards and has the right mentality to develop on the fly.

"I was seeing the field better and better as the game went on, (there were) things I saw before it happened, and that's a part of playing quarterback," Haskins said. "In my short career and the amount of (snaps) I've had throughout my career, I just want to play natural and play instinctive."

Against Darnold and the Jets at home Nov. 17, Haskins will have a safety valve in running back Adrian Peterson, who rushed for 108 yards at Buffalo and can be a workhorse for the run-first Callahan. Peterson and veteran left tackle Donald Penn also could provide the balance of tough love and support Haskins might need.

"I told him to be laid back, lean on us if he needs anything and stuff like that," Penn said. "I said: 'Don't be scared to be a leader and control. If you see something you don't like in the huddle, speak up.' I said, 'Guys are going to respect that a lot more. Don't wait for one of us to do it.'"

NOTES: The Redskins on Thursday put left tackle Trent Williams on the non-football injury list and activated running back Derrius Guice. Williams reported last week after a lengthy holdout and discussed a cancer scare that led him to distrust the organization. Guice has been out since Week 1 with a right knee injury.