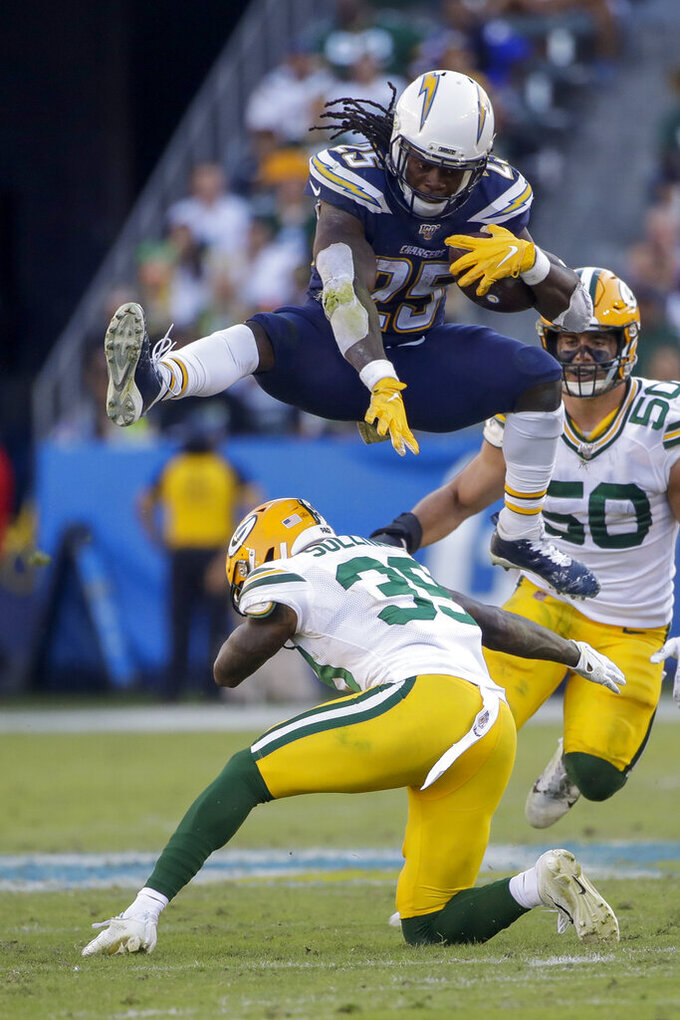 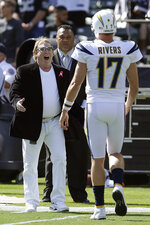 OAKLAND, Calif. (AP) — From his first career start in 2006 to some riveting comebacks and crushing defeats, Chargers quarterback Philip Rivers has had plenty of memorable experiences playing against the Raiders at the Oakland Coliseum.

So there will be a bit of nostalgia when Rivers plays his final scheduled game there Thursday night, when the Chargers (4-5) take on the Raiders (4-4) in a game crucial for both teams' playoff hopes.

"I love playing there," Rivers said. "There's certain places you go — I mean, Kansas City, I can picture the guys that sit behind our bench that have been sitting there for 15 years. Same thing in Oakland and same thing in Denver so I think you just, it's almost a little bit like you have this relationship with the atmosphere and the fans that are there because you've been there so many times."

Rivers has been to the Coliseum so often (13 times), that only nine Raiders players have more games there than he does, a sign of Rivers' longevity and the roster overhaul in Oakland under coach Jon Gruden.

Rivers has won nine of those starts, throwing 24 touchdown passes in the games, totals that only Raiders quarterbacks Derek Carr and Rich Gannon have surpassed at the Coliseum since the team moved back to Oakland in 1995. It plans to relocate to Las Vegas in 2020.

But it's the atmosphere and the last dual-use stadium in the NFL that stands out most for Rivers.

"It's just always — a lot of personalities, obviously," he said. "Shoot, it's an in-state rival, best way to describe it. The best way I can describe it is think about the team you played in high school that was kind of that cross-town team that you always looked forward to. I mean, it's that kind of old-school rivalry. It'll be awesome. The fact that it's a night game, too. Again, division game, both teams right there in the mix. It'll be cranked up pretty good."

The Raiders are getting impressive contributions from their rookie class, with a franchise-record four TDs in last week's win over Detroit. Running back Josh Jacobs is leading the way with 740 yards rushing and six TDs, while tight end Foster Moreau has added three TD catches and receiver Hunter Renfrow has two. The 11 TDs from rookies are five more than the next highest team, Washington, and tied for the most through eight games since the Rams had 16 in 1983.

The Chargers hope that by scaling down their playbook to five or six running plays, they have found consistency in their ground game. Los Angeles ran for a season-high 159 yards and averaged more than four yards per carry for the first time since Week 4.

Melvin Gordon had 80 yards last week, his best game since returning following a two-month holdout, and has four straight games with 120 scrimmage yards or more against the Raiders, along with five touchdowns.

Raiders receiver Tyrell Williams is ready to enjoy the other side of this AFC West rivalry. After spending his first four seasons with the Chargers, Williams signed with the Raiders this offseason. Originally set to be the No. 2 receiver alongside Antonio Brown, Williams has been given a bigger role after Brown was released two days before the season opener. He has 23 catches for 355 yards and five TDs despite missing two games with a foot injury. He said he's had this game circled on his schedule ever since it was announced in April.

"I've been more excited all week to be able to have this game," he said. "I stay pretty even-keeled but I think I'll have a lot more juice this week."

Joey Bosa has 5½ sacks in his last three games and is second in the AFC with 8½ this season. He is trying to become the first player since Carolina's Charles Johnson to have at least two sacks in three straight road games.

Like most coaches and players, Gruden is not a fan of Thursday night games with only three days of preparation. That's even more the case when the Raiders are dealing with injuries on the offensive line that leave questions about who will even be available. Right tackle Trent Brown left the previous game with a knee injury in the first quarter and his status is unknown. Center Rodney Hudson missed last week's game with a sprained ankle that might not be healed in time for him to play against the Chargers.

"It's hard to prepare for them when you don't really know who's on your team," Gruden said. "We've had so many changes it's tough to do that. I hate this. I don't believe in this Thursday football. I'm not going to be on my soap box any more than that. It hurts both teams, obviously the preparation. We take a lot of pride in getting our guys ready to play. We need a little time to do that, but a lot of people disagree with me obviously, so it'll be a challenge."