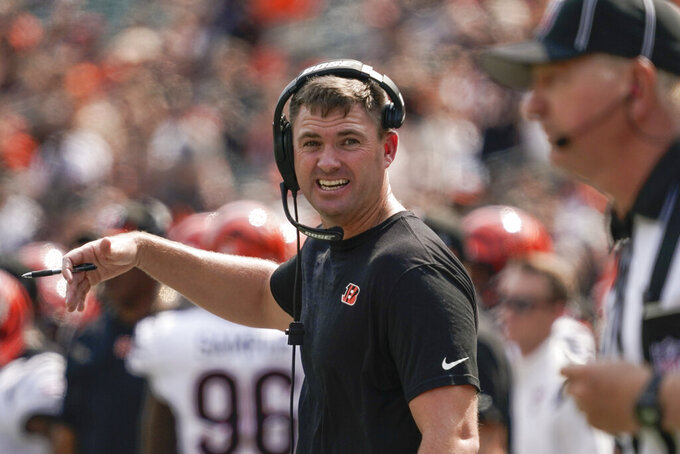 Cincinnati Bengals head coach Zac Taylor pleads to an official in the first half of an NFL football game against the Minnesota Vikings, Sunday, Sept. 12, 2021, in Cincinnati. (AP Photo/Jeff Dean)

In Taylor's estimation, he's watched more videotape on Rodgers than any other NFL quarterback. And that includes Taylor's current quarterback, Joe Burrow.

One of Taylor's first assignments when he was hired as an NFL assistant with the Dolphins in 2012 was cataloging videotape of Rodgers, who was the reigning NFL MVP.

“That was my first week in the NFL, watching every snap Green Bay took in their NFC championship run in 2011,” the third-year Cincinnati coach said this week. “I was like, man, is every quarterback in the league like this? And then you come to find out over the course of 10 years that he's special.”

Taylor will have a sideline seat Sunday when the Packers (3-1) visit the improved Bengals (3-1).

Rodgers at 37 is still bringing it. Last week in Green Bay's win over the Steelers, he was 20 for 36 for 248 yards and two touchdowns. He's thrown for 897 yards as Green Bay has reeled off three straight wins after losing to New Orleans in Week 1.

“It starts with their tremendous quarterback, and they've got great tools and weapons all around him, and (Packers coach Matt) LaFleur does a great job of putting them in a good position," Taylor said.

The Bengals have a pretty decent quarterback of their own.

Four days after Cincinnati took down the Steelers in Pittsburgh, the Bengals fell behind the Jacksonville Jaguars 14-0 at halftime of Thursday night's game. The unflappable Burrow led scores on all four second-half drives, the final one setting up Evan McPherson for a game-winning 35-yard field goal as time ran out.

“They went out and they spent some money, they brought in some free agents, guys that we know," Rodgers said. "They’re a talented team. I think the difference is they’re 3-1, so they’re obviously playing with a lot more confidence and believing that they can and should be winning games. Having a first-pick quarterback and some stud guys on that side of the ball, they’ve been scoring some points.”

MOVING UP THE CHARTS

Rodgers threw his 420th career touchdown pass in the win last week to tie Dan Marino for sixth all time.

Rodgers has a chance to move into the top five Sunday. He’s one behind Philip Rivers, who threw 421 touchdown passes before retiring at the end of last season.

Green Bay’s Davante Adams leads the NFL with 31 receptions and has more than twice as many catches as any of his teammates. Running back Aaron Jones is second on the team with 13. Randall Cobb ranks second among wideouts with nine.

But the Packers did show they’re capable of spreading the ball around when the Steelers limited Adams to six catches for 64 yards and no touchdowns. Cobb had two touchdown catches in the game, marking his first game with multiple touchdown catches since 2015.

Bengals running back Joe Mixon is still day to day after spraining his ankle in last week's game. But safety Jessie Bates (neck) is expected to be back for Sunday. Cornerback Chidobe Awuzie (groin), receiver Tee Higgins (shoulder) and defensive tackle Larry Ogunjobi (knee) also are back at practice and could play Sunday.

Green Bay likely will be playing this game without its two top defensive players and could be missing its two best offensive linemen as well.

Cornerback Jaire Alexander is unlikely to play Sunday as the Packers continue consulting with specialists about his injured shoulder. Outside linebacker Za’Darius Smith will miss a fourth straight game with a back issue.

David Bakhtiari, an All-Pro left tackle in 2020, hasn’t played yet this season and will miss at least the first six games as he recovers from a torn anterior cruciate ligament. Elgton Jenkins, a Pro Bowl left guard last season who had been filling in at left tackle, has missed the Packers’ past two games with an ankle injury.

The Packers also will be missing wide receiver Marquez Valdes-Scantling for a second straight game because of a hamstring injury.