Rodgers unlikely to play in any of Packers' preseason games 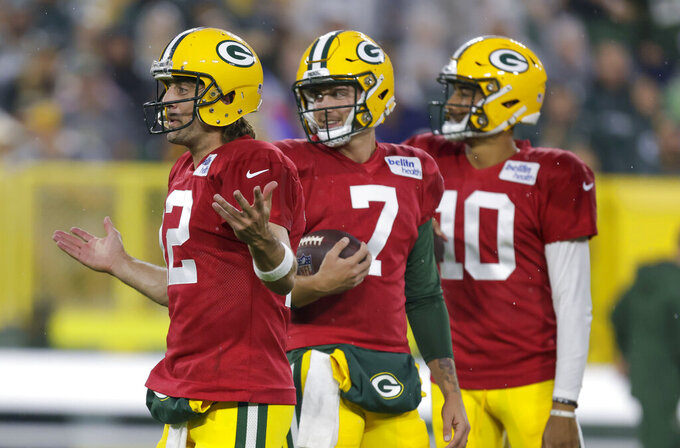 Packers coach Matt LaFleur said Tuesday that Love will play the majority of the Packers’ preseason opener Saturday against the Houston Texans and that Kurt Benkert also would get some snaps.

LaFleur then was asked whether Rodgers would play at all in the preseason.

“I would say most likely not,” LaFleur replied.

Green Bay hosts the New York Jets on Aug. 21 and visits Buffalo on Aug. 28 in its other two preseason games.

The Packers want to get Love some game experience after the pandemic wiped out last year’s preseason. Love also didn’t play a single down last year during the regular season as the third-team quarterback behind Rodgers and Tim Boyle, who is now with the Detroit Lions.

Love did get plenty of work during the offseason and got the vast majority of first-team reps during the mandatory minicamp that Rodgers missed. The Packers moved up four spots in the 2020 draft to take Love out of Utah State with the 26th overall pick.

“I’m super excited,” Love said last week about the opportunity to play preseason games. “This is the moment I’ve been preparing for ever since last year not having preseason. It’s almost like I’ve been training a year just for this first preseason game. I’m sure excited to get out there and get back to playing ball.”

Benkert, who signed with the Packers in May, also could use the experience. The former Virginia quarterback spent the 2018 and 2020 seasons on the Atlanta Falcons’ practice squad but has no NFL game experience. Benkert was on injured reserve in 2019.

Rodgers, who won his third MVP last season, sat out the Packers’ organized team activities and mandatory minicamp this offseason while in a standoff with team management. He reported for training camp on time and has been practicing ever since.

By Joe Reedy 22 minutes ago
By Dennis Waszak Jr. an hour ago
an hour ago
3 hrs ago
4 hrs ago