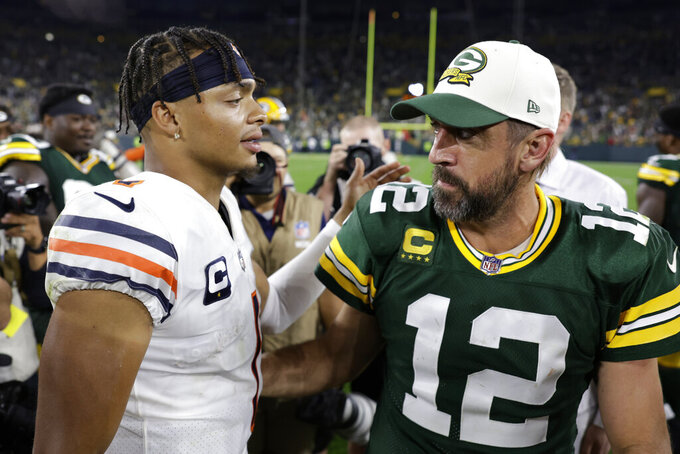 OPENING LINE: Bears by 2½, according to FanDuel SportsBook

TURNOVER DIFFERENTIAL: Texans plus-2, Bears plus-1.

TEXANS PLAYER TO WATCH: Rookie RB Dameon Pierce had 15 carries for 69 yards and was solid in pass protection a week after managing just 33 yards on 11 carries in his NFL debut. His 69 yards rushing were the most by a Houston rookie since 2017. Smith is intent on getting Pierce, a fourth-round pick from Florida, even more involved this week as the Texans focus on the running game.

BEARS PLAYER TO WATCH: QB Justin Fields. The Bears got their run game going last week. It would help if their passing game started to click, too. Fields has attempted a league-low 28 passes, and his 15 completions are tied for 31st among qualifiers. Chicago has by far the fewest yards passing at 153 yards.

KEY MATCHUP: Bears RB David Montgomery against Houston's defensive line. The Bears got their ground game going last week, running for 180 yards and 6.7 yards per attempt. Montgomery played a big part in that with 122 yards on 15 rushes, after managing just 26 yards on 17 carries in a rain-soaked season-opening win against San Francisco. The Texans gave up 149 yards rushing against Denver.

STATS AND STUFF: Smith led the Bears to an 81-63 record and a Super Bowl appearance from 2004-12. He is 0-2 against Chicago, with losses coaching Tampa Bay in 2014 at Soldier Field and 2015 at Raymond James Stadium. Counting a loss by Illinois to South Florida in 2018, Smith is also 0-2 at Soldier Field since the Bears let him go. ... WR Brandin Cooks, who is 28, had four receptions for 54 yards Sunday to give him 8,053 yards receiving in his career, making him the 10th player in NFL history to reach 8,000 yards receiving before his 29th birthday. ... LB Christian Kirksey had an interception last week to give him six in his career. Sunday will be his 100th game. ... DB Jonathan Owens had 10 tackles last week to give him 25 this season. It’s the most in the NFL this year and the most through two weeks in franchise history. ... LS Jon Weeks has played in 195 straight games, the third-longest active streak in the NFL. ... LT Laremy Tunsil ranks third in overall blocking by Pro Football Focus with a 81.8 grade. He is one of only five tackles that have an overall grade of 80 or higher through the first two weeks of the season. ... K Ka’imi Fairbairn hasn’t missed a field goal from inside 40 yards since 2017, a streak of 60 straight made kicks. ... Bears WR Darnell Mooney has just two receptions for 4 yards and has been targeted five times. He had 1,055 yards last season — his second. ... DE Robert Quinn, who set a club record with 18 1/2 sacks last year, got his first of the season last week. ... LB Trevis Gipson tied a career high with two sacks last week.

FANTASY TIP: Montgomery is coming off a big game and will be going against a defense that has struggled against the run.