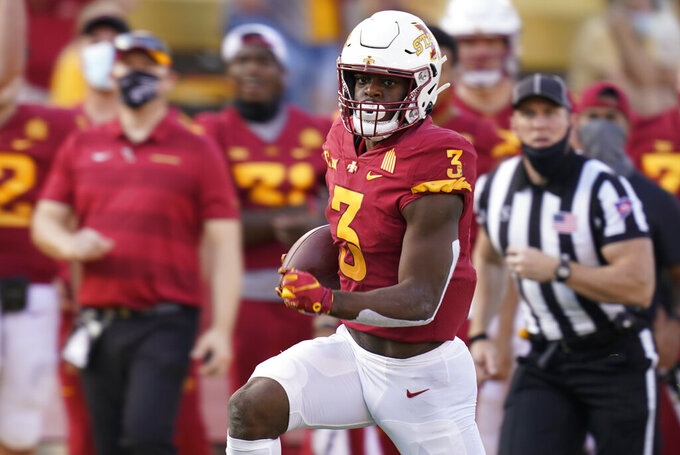 FILE - In this Oct. 10, 2020, file photo, Iowa State running back Kene Nwangwu runs up field during the second half of an NCAA college football game against Texas Tech in Ames, Iowa. One of the biggest problems for the Minnesota Vikings last season was the performance of their special teams units. They made improvement there a clear priority on the third day of the draft by selecting Iowa State running back Kene Nwangwu in the fourth round, and Iowa wide receiver Ihmir Smith-Marsette in the fifth round. (AP Photo/Charlie Neibergall, File)

MINNEAPOLIS (AP) — NFL teams typically use much of the third day of the draft for positional depth and long-term projects, with an eye toward players who can contribute and thrive on special teams.

This year, the Minnesota Vikings predictably put an extra emphasis on such units. Their special teams were in disarray last season, a stinging reality general manager Rick Spielman fully acknowledged after finalizing their 11-player draft class.

Nwangwu compiled the third-most career kickoff return yards in Big 12 history and ran a 40-yard dash at his pro day workout unofficially clocked at 4.29 seconds. Smith-Marsette's career average of 28.7 yards per kickoff return is the second-best in the Big Ten record books, and he took two back for touchdowns in 2019. They're both likely to get looks as a punt returner, too.

“I definitely see myself as a wide receiver first and then a return man after that, but I’m somebody that takes pride in the return game too," Smith-Marsette said. "It’s not just something I like to do. I love to do it, and I feel like taking on that challenge is going to be one of the better things for me."

California’s Camryn Bynum was selected as a safety in the fourth round and figures to have a role on special teams. Bynum said he had a pre-draft virtual meeting with new Vikings special teams coordinator Ryan Ficken, a sure sign of the interest in his kick coverage ability.

Throw in North Carolina linebacker Chazz Surratt, a third-round pick on Friday who started his college career as a quarterback, and the Vikings ought to at least be in better shape to effectively cover and return this season even if the field goals, extra points and long snaps remain question marks.

“When you have the type of athletes we were able to get in the third day of the draft here, nine times out of 10 those guys wind up playing and performing well on special teams as they learn their craft at their position,” Spielman said.

With Dalvin Cook and Alexander Mattison well-established as the first and second options at running back, if Nwangwu has a future as a ball-carrier that likely would be well down the road. He never reached the end zone until his senior year with the Cyclones, when he had 339 of his 744 career rushing yards.

Nwangwu was a mechanical engineering major, the son of Nigerian immigrants who came to the U.S. for higher education and settled in Texas. School always came first for them.

“If you ask my mom, definitely the NFL would be a ‘Plan B,’” Nwangwu said.

Bynum, a four-year starter at cornerback for the Golden Bears, had about 40 family members and friends with him to watch the draft at a rented cabin at Big Bear Lake west of Los Angeles. As he finished a video conference call with reporters, the group eagerly waited for him to join in a celebratory jump into the frigid lake — a decidedly Minnesota-themed activity.

“The water’s like five degrees,” Bynum said with an exaggeration belying the laws of physics, "but it’s fun.”

Smith-Marsette has the skills to take over as the No. 3 wide receiver behind Justin Jefferson and Adam Thielen, totaling 140 yards and two touchdowns against Wisconsin in his last college game. With a background as a swimmer, the New Jersey native found a unique way to develop strength, mobility and stamina for the field — by playing water polo.

“It teaches you patience, toughness. When you want to touch the bottom of the pool, you can’t. It just keeps you going, and it’s a lot of grit that comes from that game,” Smith-Marsette said.

The 6-foot-2, 290-pound Twyman had a stellar 2019, becoming the first interior lineman to lead Pittsburgh in sacks since six-time All-Pro Aaron Donald in 2013, but he opted out of the virus-shortened 2020 season as a safeguard for his future earnings and ability to assist his family.

That plus an uneven performance in pro-day drills didn't help his draft stock, but he landed in a good place with a well-regarded defensive line coach in Andre Patterson and a former Panthers teammate. Defensive end Patrick Jones was one of the four third-round picks on Friday.

“I’m just blessed to be drafted so we won’t have to worry about those financial problems anymore,” Twyman said.