Steelers and Vikings: 2 mystery teams go at it in prime time 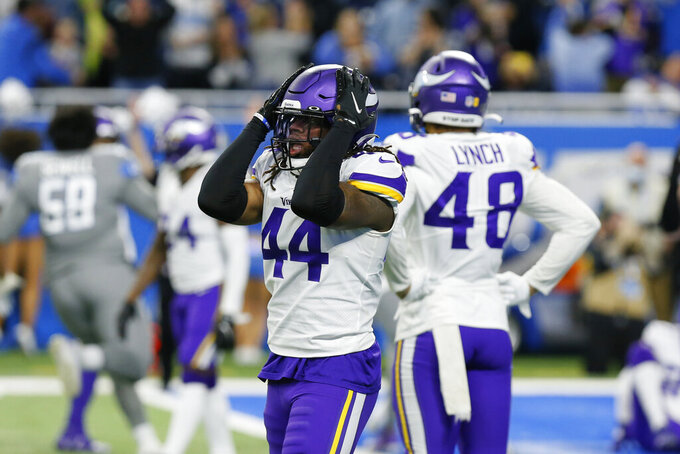 Minnesota Vikings safety Josh Metellus (44) reacts after the Detroit Lions won the game with a last second touchdown pass during the second half of an NFL football game, Sunday, Dec. 5, 2021, in Detroit. (AP Photo/Duane Burleson) 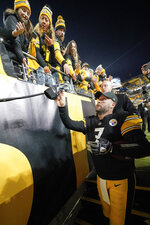 There's no way to figure out these two teams. The Vikings (5-7) go from on the rise in a victory over NFC power Green Bay to heading into the abyss after a loss to previously winless Detroit.

The Steelers (6-5-1) can't get out of their own way on both sides of the ball at times, then knock off AFC North leader Baltimore.

Each of them remain in the playoff chase, though. Each needs a star player — Steelers linebacker/edge rusher T.J. Watt and Vikings wide receiver Justin Jefferson — to carry them.

“He’s a game wrecker,” Steelers safety Minkah Fitzpatrick says of Watt, who was precisely that against the Ravens. “He’s a guy that’s going to go out there and cause havoc. Just the energy that he plays with, the passion he plays with. I wouldn’t call it the anger, but when he’s out there, he’s angry.”

Jefferson is more smooth. He'll need to be particularly impactful this week with sidekick Adam Thielen hobbled by a sprained ankle.

According to FanDuel SportsBook, the Steelers, ranked 14th in the AP Pro32, are a 3-point underdog at the No. 22 ranked Vikings. Pro Picks expects a huge game from both Watt and Jefferson, but in the end ...

KNOCKOUT POOL: The Chiefs kept folks alive with their win over Denver, and Pro Picks has three strong possibilities remaining for this week: Seattle, Green Bay and, with the Giants so underwhelming and banged up, the CHARGERS.

New York has uncertainty at quarterback, and can't score regardless.

Somehow, both teams are on the fringes of the NFC playoffs. Atlanta will stay there.

Supremacy in the NFC West, with Arizona in position to clinch a playoff berth.

The Packers, fresh from a bye, should have an easier time securing their postseason spot.

Coming off the ugliest of losses, can the Bills rebound? Not here.

It's difficult to fathom how well Washington's D has played minus its best player, Chase Young.

Both clubs need a turnaround from sloppy defeats. We think Cincinnati gets it.

Baltimore is banged up and Cleveland is rested. Still, the Ravens are better.

While the Chiefs have resurrected their season, the Raiders are stumbling. But the spread is too high.

We can't see the Titans losing to yet another weak team, and they come off a bye.

Two wins in a row for the Lions? Not quite.

Two wins in a row for the Seahawks? Definitely, and with ease.