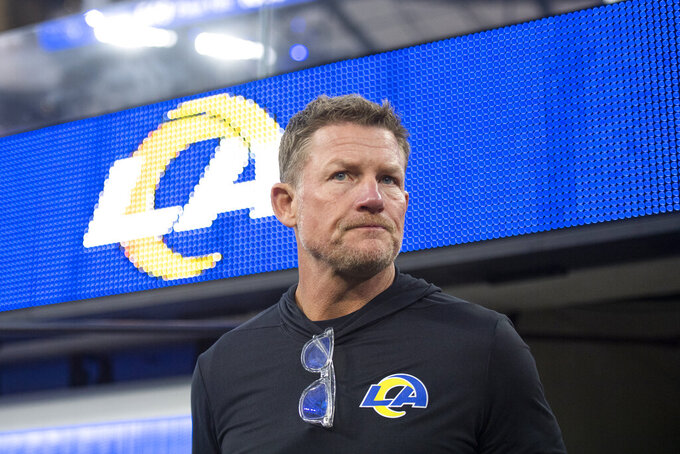 LAST SEASON: The Rams won it all for the second time in team history, raising the Vince Lombardi Trophy for the first time during the franchise's two Los Angeles eras. Sean McVay became the youngest Super Bowl-winning coach by teaming up with new quarterback Matthew Stafford to revitalize the Rams' offense, while a defense led by Aaron Donald, Jalen Ramsey and coordinator Raheem Morris made steady improvements throughout the 12-5 regular season. LA won nine of its final 10 games after a November slump, rolling to the NFC West title before routing Arizona and bouncing defending champ Tampa Bay in the playoffs. The Rams gritted out a tough win over San Francisco in the conference title game before a 23-20 victory over Cincinnati in the Super Bowl at SoFi Stadium on a late TD pass from Stafford to Cooper Kupp. Among the Rams' many superlative performances, Kupp led the NFL in every major receiving category and was Super Bowl MVP.

OUTLOOK: Unless they swing a wild trade, the Rams won't make a first-round pick for the sixth consecutive season. Detroit has their choice as part of the Stafford deal. Los Angeles also moved its second-round and third-round picks to Denver for the half-season rental of Miller, which means general manager Les Snead isn't scheduled to choose a player before his compensatory third-round pick for losing GM Brad Holmes to the Lions. The Rams have eight picks, but just three before the sixth round. Their scouting department must do its usual above average job of identifying undervalued players who can create the cheap depth that allows Snead to swing pricey deals for stars. The champs' formula is tough to replicate, but they've been using it splendidly ever since they returned home to California in 2016.