Titans may get Tannehill back to help D, Henry vs. Broncos 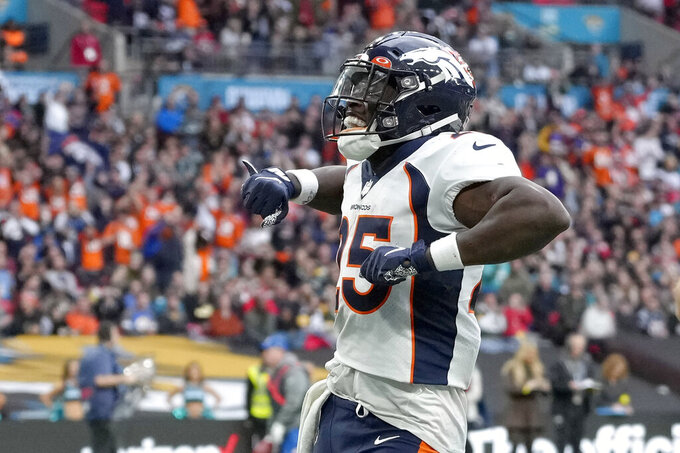 NASHVILLE, Tenn. (AP) — The Tennessee Titans are coming off an overtime road loss in which four defensive starters played 100 snaps, with a fifth going 97.

Rested and refreshed thanks to their bye week, even with the return flight from London and yet another road trip on Sunday to visit the Titans (5-3).

Not a problem for Tennessee, according to two-time All-Pro safety Kevin Byard.

“As a defense, we just feel like we're hitting our stride," Byard said.

The Titans' defense and two-time NFL rushing champ Derrick Henry have been carrying Tennessee with quarterback Ryan Tannehill missing the past two games because of a sprained ankle. Russell Wilson still is trying to find his comfort level with first-year coach Nathaniel Hackett and the Broncos (3-5).

That makes this game destined to be a defensive showdown between two of the NFL's best units.

Tennessee is tied for 10th in fewest points allowed and second against the run. The Broncos are the league's stingiest against the pass and second in total yards, though they traded away pass rusher Bradley Chubb to Miami at the trade deadline during their bye week.

Right now, the Broncos are just trying to string together consecutive wins for the second time this season after a 21-17 victory over Jacksonville before the bye. Wilson said they have to have a playoff mentality right now, especially against the AFC South-leading Titans.

“We have to be at our best and bring our ‘A’ game,” Wilson said.

The Titans are back in Music City for their fourth home game of the season. The two-time AFC South champs rallied from a 0-2 start with a five-game winning streak that was snapped last week with a 20-17 overtime loss in Kansas City.

“We have a challenge on our hands,” Tannehill said. “We have to go out and execute and play our brand of football. We’re going to have to take advantage of some opportunities that we get. When we have chances to make a play downfield or across the middle or whatever the case may be, we are going to have to make it.”

As good as Denver's defense is, the Broncos haven't faced Henry this season, and after finishing ninth last season, he is back atop the league's rushing stats with 870 yards. Henry also has topped 100 yards in five straight games to match the longest streak in his career.

Henry is the only NFL player to put together a five-game streak rushing for at least 100 yards since 2015, and he's now done it twice. Before the Broncos can worry about whether they're defending Tannehill or rookie QB Malik Willis, they're going to have to deal with Henry.

Denver is giving up 122.6 yards rushing per game, and the Broncos have been burned by Las Vegas' Josh Jacobs (144 yards, two TDs), Jacksonville's Travis Etienne (156 yards, TD) and Jets rookie Breece Hall, who rumbled for a 62-yard TD against them before blowing out a knee in Week 7.

Denver is the NFL's stingiest defense when inside its own 20, giving up only five touchdowns on 19 red-zone chances. That's a league-lowest rate of 26.3%. The Titans come in as the league's best at scoring TDs inside the 20 at a rate of 78.9%.

Henry is a big reason for that, with nine TDs rushing. He is one shy of posting 10 TDs rushing for a fifth straight season, something only LaDanian Tomlinson (nine), Adrian Peterson (seven) and Shaun Alexander and Michael Turner (five) have done.

“It has been crucial to our success up until this point in just getting wins,” Tannehill said of the Titans' red-zone success. “No doubt it is going to play a huge factor in the game on Sunday. Being able to extend drives down into the red zone, and when you get down there come away with sevens instead of threes.”

Tannehill appears ready to return to the starting lineup. He also might get rookie wide receiver Treylon Burks back from injured reserve, with the 18th draft pick overall returning to practice and having had a bye for an extra week of recovery from an injured left toe.

That should give a boost to a passing offense that ranks 31st, with veteran Robert Woods the only Titans receiver with a TD catch this season.

Wilson is two TD passes shy of 300 for his career. Yet the veteran has only six TD throws in seven games this season. Facing the Titans might give him a chance to change that. Wilson has thrown for 973 yards with six TDs without an interception in three career starts against Tennessee.

Titans defensive tackle Jeffery Simmons is in a walking boot after aggravating his sprained left ankle in Kansas City. He had played two straight games without practicing.

Denver has its own Simmons with an injury issue. Safety Justin Simmons got his first interception this season but sprained a knee in London. Wide receiver KJ Hamler, the Broncos' fastest player, missed practice Thursday after pulling a hamstring Wednesday.