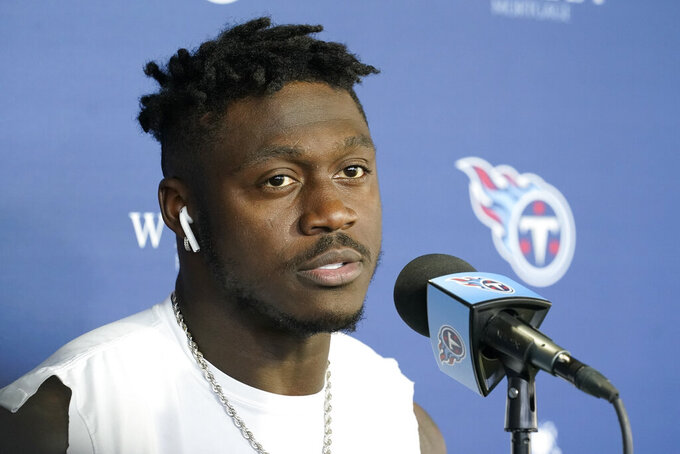 Tennessee Titans wide receiver A. J. Brown answers questions after an NFL football practice Nov. 5, 2021, in Nashville, Tenn. Brown first shared his battle with depression with a video posted to social media. On Thursday, Nov. 18, the 2020 Pro Bowl receiver talked to reporters about a fight that had him thinking of suicide on Nov, 12, 2020, saying mental health is as important as physical health and he wants to help encourage others to seek help. (AP Photo/Mark Humphrey)

NASHVILLE, Tenn. (AP) — Tennessee Titans wide receiver A.J. Brown seemed to have everything going his way in 2020, having his best season yet in the NFL on the way to earning his first Pro Bowl honor.

Behind his big smile, Brown said Thursday he was battling so hard with depression back then that he thought of killing himself. He shared a video on social media Nov. 12 on the one-year anniversary of that dark time, encouraging people to ask for help, and Brown told reporters Thursday that's why he finally spoke up.

“It was a dark moment, and it was a year ago where I had thought about taking my life, you know? And it was special to me because it just came with my heart that I wanted to share with others and help others so much as I can," Brown said of sharing his own struggle.

Growing up in Mississippi, Brown said he always brushed off his feelings and didn't consider what depression really was. Brown wouldn't share what led to his depression. Those feelings wound up almost overwhelming him.

Brown said he thought long and hard about posting the video he recorded earlier on Nov. 12. He was nervous about whether he should share his personal struggle with the world. Brown described what gave him the courage to do it.

“I just wanted to put out a positive message that I’m still here,” Brown said. “I’m still growing. I’m still learning. I’m blessed. I’ve got a lot of things to be grateful for and someone was there for me. So reach out to your loved ones and ask them how they’re doing and listen to them, you know, because it’s important.”

The response to Brown's video has been very positive. Brown said a lot of men reached out, telling him what he shared was powerful. He also sat down with several Titans teammates who talked about their own struggles, which Brown says they need to do more often.

“You need to look out for one another,” Brown said. "I know we play this beautiful game, but you know, life is beautiful.”

Brown said it's easy to put on a smile and pretend everything is OK. He credits former Mississippi teammate and roommate Elijah Moore, a rookie wide receiver with the New York Jets this season, with helping him through his most difficult moments. He also reached out for professional help, which he's still using.

The receiver currently leads the Titans with 41 catches for 567 yards and three touchdowns.

Titans coach Mike Vrabel said Monday he appreciates Brown's courage in speaking up about mental health. The coach focuses regularly on the mental health of the Titans and said he is glad they've been able to provide a safe space for people dealing with the strain that being in the NFL can put on professional athletes.

“Hopefully his message can help somebody else feel comfortable to seek help, get things off their chest, to be able to talk through things, and I think that is a great example,” Vrabel said.

Vrabel added that the Titans discussed a college football player whose death in November 2015 was ruled a suicide and how his mother thought her son seemed happy. That struck home with Vrabel, father of two sons, with one playing football at Boston College.

“Having kids that are going to start going off away from college and moving on and having their own life, these are real things we all deal with,” Vrabel said. “It is great when people can, especially significant professional football players or athletes, are willing to address it and willing to make statements about it.”