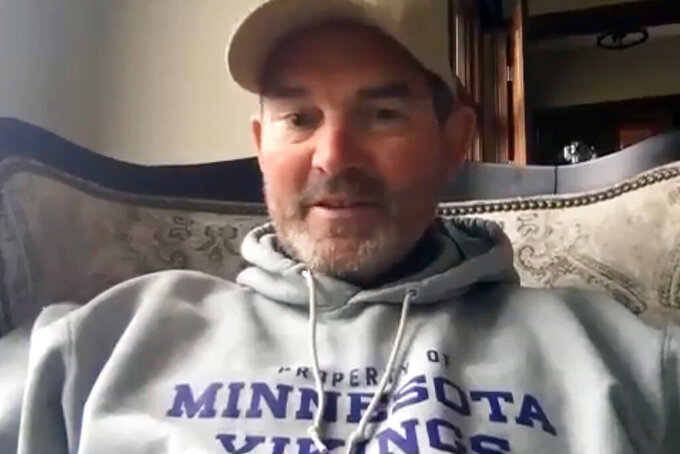 In this image made from video, Minnesota Vikings NFL football team head coach Mike Zimmer speaks during an interview from the family's sprawling ranch in Walton, Ky., Wednesday, May 13, 2020. Mike Zimmer has managed to conduct some extra strategy sessions during this sequestered NFL offseason, despite being disconnected from all of his players and almost all of his staff. That's because the Vikings coach has his newly appointed co-defensive coordinator spending these homebound days with him. Adam Zimmer, of course, is his son. (Dave Campbell/Zoom via AP) 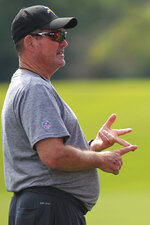 MINNEAPOLIS (AP) — Mike Zimmer has managed to conduct some extra strategy sessions during this sequestered NFL offseason, despite being disconnected from all of his players and almost all of his staff.

That's because the Minnesota Vikings head coach has his newly appointed co-defensive coordinator spending these homebound days with him.

Adam Zimmer, of course, is his son. They've both been living this spring with one of Zimmer's adult daughters — the other is married — at the family's sprawling ranch in Kentucky, making communication with one of his key assistants as easy as yelling toward the basement. Adam Zimmer, 36, has also assumed resident technical support responsibilities for his 63-year-old father.

“If I can’t get it figured out, I can text him and say, ‘Come up here and fix this,’" Zimmer said Wednesday on a video conference call with reporters. “At night, after dinner or something, we’ll sit down and have some crazy idea and we’ll say, ‘OK, we can talk about it tomorrow with the rest of the defensive coaches,’ but it's been good.”

Zimmer's wife died in 2009 when he was the defensive coordinator for the Bengals. He purchased a portion of the land for hunting about a half-hour south of Cincinnati the season before he was hired by the Vikings. Soon after, he expanded the getaway he dubbed “Zimmer Ridge Ranch” to 160 acres with a custom-built 8,000-square foot home.

They've built a golf course of sorts, with one green and four tee boxes that Adam Zimmer has been taking advantage while shuttered NFL facilities have scattered almost all employees around the country. In between virtual meetings with coaches and players, Zimmer has taken breaks by hopping on his tractor to prime the fields for planting. Adam Zimmer, who is also the linebackers coach and shared the promotion with defensive line coach Andre Patterson, has made good use of his meat smoker for dinners, and evenings have featured plenty of bonfires.

“I can go get on the four-wheeler, on the tractor, go fishing and shoot guns, or whatever I want to do. So it’s not like I’m totally quarantined, even though I am, but I really miss being around the players,” Zimmer said. "They’re probably going to get an extra dose of me when they get back.”

Alas, all the videoconferencing in the world can't match the value of in-person conversation at what would be on-field practices this month for the Vikings and the rest of the league in a normal year.

“I want to get out there. I want to coach and correct them, teach them, try to build the camaraderie that we need as a football team," Zimmer said. "But unfortunately, we’re not able to do that.”