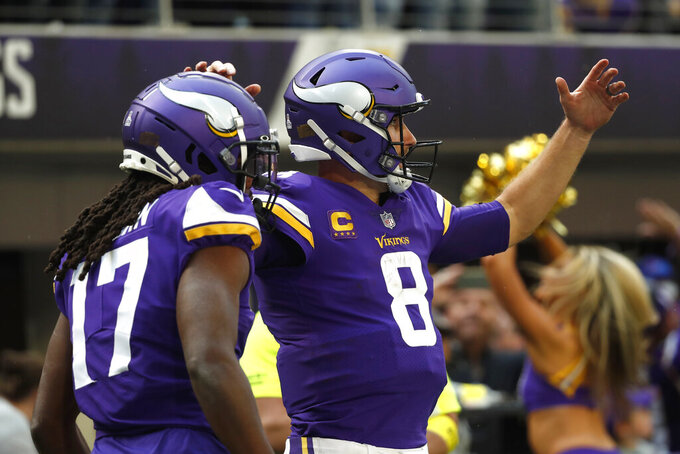 Minnesota Vikings quarterback Kirk Cousins (8) celebrates with teammate K.J. Osborn (17) after scoring on a 17-yard touchdown run during the first half of an NFL football game against the Arizona Cardinals, Sunday, Oct. 30, 2022, in Minneapolis. (AP Photo/Bruce Kluckhohn)

MINNEAPOLIS (AP) — The winning touch that so often escaped the Minnesota Vikings last season is back in their hands.

The Arizona Cardinals can sure vouch for it.

Za'Darius Smith had three sacks to help a fired-up defense hang on against Kyler Murray, and the Vikings beat the Cardinals 34-26 on Sunday for their fifth consecutive victory.

Dalvin Cook rushed for a season-high 111 yards and a touchdown, Kirk Cousins passed for two scores and ran for another, and the Vikings (6-1) remained unbeaten at home in coach Kevin O'Connell's rookie year.

“I thought we were a really good football team last year. We just couldn’t find the inches in too many games. Why we found them now, I don’t know,” Cousins said.

Murray passed for 326 yards and a season-high three touchdowns, including a one-handed grab for a score by DeAndre Hopkins with 47 seconds left in the second quarter, but he threw two second-half interceptions that proved costly for the Cardinals (3-5).

In an action-packed matchup in Arizona last year, Murray had three touchdowns and two interceptions in a 34-33 win. The Vikings lost eight games by eight points or fewer last season. All five of their wins in the streak have been within that margin.

“It feels good. I just hate that people still are not talking about us, but it’s OK,” Smith said. “We’ll continue to be the underdogs.”

Hopkins had 12 catches for 159 yards in his second game back from a suspension, Rondale Moore had seven receptions for 92 yards and a fourth-quarter touchdown, and Murray’s speed kept an active Vikings defense honest all game.

The Cardinals went ahead 17-14 on Murray's touchdown pass to Zach Ertz early in the third quarter, but the lead lasted only 3:26.

The Vikings drove the other way for a touchdown run by Alexander Mattison. Then they went 31 yards in four plays for a touchdown after the Murray's dangerous heave under pressure from his own end zone was picked off by Harrison Smith.

Patrick Peterson, who jawed at his former team all game, was so excited he turned toward the Cardinals sideline and started dancing while Smith was still on his return.

“It’s built in us. We’re just waiting on that moment to where we can go take the ball away,” said Peterson, who had three passes defensed.

Cousins connected with K.J. Osborn on third-and-2 from the 5 for a 34-26 lead that Greg Joseph failed to pad when his extra point hit the upright. That touchdown was set up by a fumbled punt return by Greg Dortch at his 25.

“We just crushed ourselves, just did too many things that we can’t do,” Cardinals defensive end J.J. Watt said. “Against a good football team, they’re going to beat you.”

The Cardinals crossed midfield on each of their last three possessions over the last half of the fourth quarter while trailing by one score — and never got closer than the 37.

Murray's throw for Ertz was way behind and picked off by Camryn Bynum. Then former Cardinals linebacker Jordan Hicks dragged down Eno Benjamin just short of the marker on fourth-and-4 to turn the ball over with 2:39 left.

Finally, with the Cardinals out of timeouts on their last drive, Murray was sacked by Za'Darius Smith at the 44 with 10 seconds remaining, and Harrison Phillips brought him down for a big loss on the last play to end the game.

“We’re right there. It’s not like we’re getting blown out,” Hopkins said. "This is one of the best teams in the NFL, and we had a chance to win today.”

Said Cousins: “You’ve just got to keep earning your way. The difference between 6-1 and 1-6 is pretty thin.”

Joseph has missed five consecutive field goals at U.S. Bank Stadium. His 56-yard attempt on the final snap of the first half was so low it hit Cardinals nose tackle Leki Fotu in the facemask.

Jared Allen donned a cowboy hat and rode a black horse onto the field at halftime for his induction ceremony for the club’s Ring of Honor. Fans received a fake mullet attached to a headband in tribute to Allen, a three-time All-Pro defensive end in six seasons with the Vikings from 2008-13. Both Smith and Watt paid homage to Allen's calf-roping celebration with their own sacks.

Vikings: DE Dalvin Tomlinson (calf) left in the third quarter. ... Smith (knee) came out twice for treatment on an aggravated injury but returned both times.

Vikings: Visit Washington next Sunday, the first trip there for Cousins to face his former team since coming to Minnesota in 2018.